When liver disease affects the brain 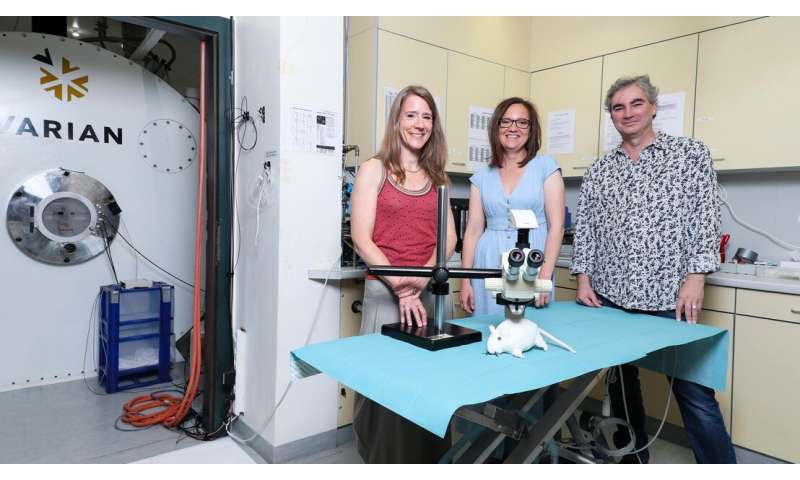 Scientists have demonstrated how chronic liver diseases cause molecular changes in the brain. They carried out their research using the 9.4 Tesla high-magnetic-field MRI machine at the Center for Biomedical Imaging (CIBM) at EPFL.

The liver plays a vital role as a filter in the human body. But what happens when it malfunctions? A physicist from EPFL, a clinician from the University of Geneva (UNIGE) and the Geneva University Hospitals (HUG) and a biologist from the Vaud University Hospital Centre (CHUV) and the Universities of Lausanne (UNIL) teamed up to perform a detailed analysis of hepatic encephalopathy, a type of brain damage caused by chronic liver disease.

For the first time, the scientists observed how diseased mouse livers can cause molecular disturbances in the animals’ brains within two weeks, before any physical symptoms appear. They also discovered the previously unknown role of two particular molecules in the process. Their findings, published in the Journal of Hepatology, suggest that brain scans could help detect liver-related brain damage in humans before their health visibly deteriorates.

The livers of adults suffering from a liver disease like cirrhosis no longer filter out numerous substances. The psychological, motor and neurocognitive disorders that may result, referred to as hepatic encephalopathy, present a wide range of symptoms, including coma. One substance known to play a role in hepatic encephalopathy is ammonium.

“Ammonium is produced when proteins break down,” says Valérie McLin, a professor in the Department of Pediatrics, Gynecology and Obstetrics at UNIGE’s Faculty of Medicine and HUG. “Some of the ammonium goes to the brain, where it is transformed into glutamine and used to produce neurotransmitters. The rest is filtered by the liver and excreted in urine. When the liver malfunctions, too much ammonium goes to the brain. The resulting rise in glutamine production can trigger cerebral edema and, in some cases, hepatic encephalopathy.” That much is known, yet two key questions remained: Are any other molecules involved in hepatic encephalopathy? And how long does it take for a diseased liver to affect the brain? 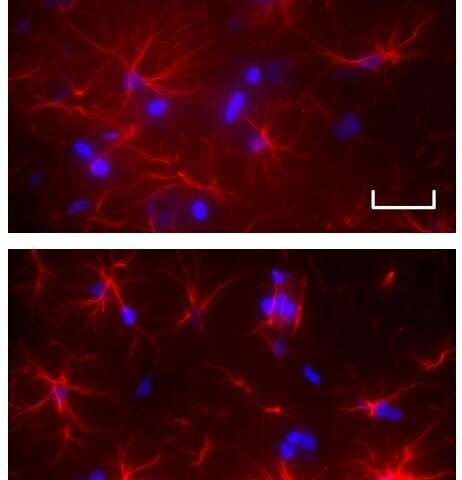 Impact much earlier than expected

In order to answer these questions, the researchers observed mice with chronic liver disease for eight weeks. “We monitored the animals individually,” says Cristina Cudalbu, a research physicist who manages the 9.4 Tesla MRI machine at the CIBM at EPFL. “Every two weeks, we analyzed them through high-resolution spectroscopy by placing them in a 9.4 Tesla high-magnetic-field MRI machine. This allowed us to track the molecular changes in their brains very precisely from the very onset of the liver disease. And we made some important discoveries!”

The scientists observed molecular changes in the mouse brains within two weeks, before the mice presented any symptoms. “Based on earlier studies, we thought it would take about six weeks for the animal’s health to start deteriorating,” says Cudalbu.

External signs of the disease, such as jaundice, malnutrition and water in the stomach, appear between the fourth and eighth weeks. “It was at that point that we saw, in addition to the excess ammonium in the brain, a sudden drop in the level of two other molecules: vitamin C, an antioxidant, and creatine, a compound that, among other things, helps produce energy,” says Olivier Braissant, a professor in the Clinical Chemistry Department at the CHUV and the Faculty of Biology and Medicine at UNIL. This is the first time that researchers have visibly demonstrated the role these two molecules play in the disease. “They come in later, after the level of ammonium increases in the blood,” says Braissant.

These findings suggest that the neurological signs of chronic liver disease could be detected well before any symptoms appear by analyzing the brain through high-resolution spectroscopy. The researchers are also wondering whether doctors could prevent—or at least limit—liver-related brain damage in patients by prescribing supplements, or probiotics such as Vivomixx, to make up for the drop in creatine and vitamin C. “We’re currently conducting similar observations in humans to see whether the brain damage is similar to that in mice,” concludes McLin.

Bringing together the right skillset

Drs. Cudalbu, Braissant and McLin work at three different research institutions, and their paths crossed thanks to an entirely different research project being carried out by Cudalbu at the CIBM’s EPFL site. “My work consists of developing new, higher-performance spectroscopy methods,” she says. While looking specifically at a method using Nitrogen-15, she unintentionally triggered the symptoms of liver disease. “Since the concentration of Nitrogen-15 is too low to detect in healthy mice, I injected them with ammonium chloride. And that worked in terms of spectroscopy—I was able to obtain a better resolution than we typically get with conventional methods. But the problem was the mice now had too much ammonium in their bodies. So I contacted Olivier Braissant, who is a specialist in this area, and Valérie McLin, who was working on clinical cases in humans,” says Cudalbu. Her development work could therefore be applied in biomedical research on hepatic encephalopathy.