Opioid prescriptions filled after eye surgery doubled from 2000 to 2014 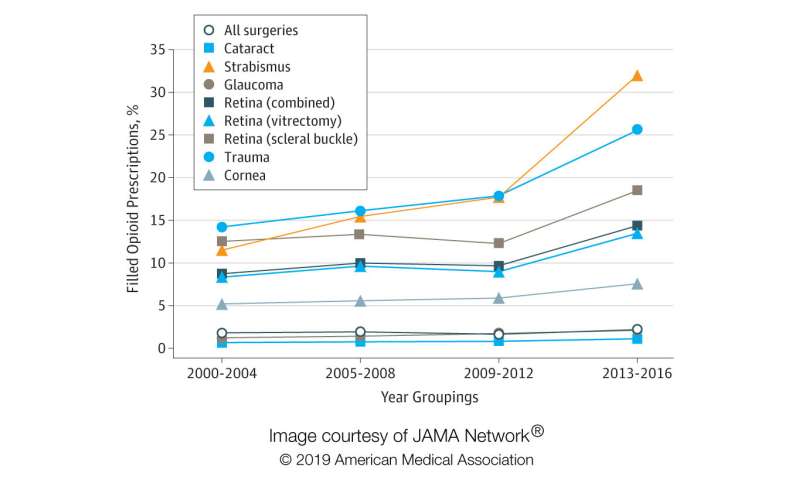 From 2000 to 2014, rates of filled opioid prescriptions after eye surgery rose considerably, despite reduced invasiveness of these procedures, according to a new study by researchers in the Perelman School of Medicine at the University of Pennsylvania. The results are published today in JAMA Ophthalmology.

“This really is surprising, given that there have been tremendous strides in the past decade to reduce the invasiveness and recovery time for these procedures. We would have expected rates to go down, not up,” said the study’s senior author Brian VanderBeek, MD, MPH, MSCE an assistant professor of Ophthalmology.

The overall rate of filled opioid prescriptions after these procedures more than doubled, from 1.2 percent in 2000-01 to 2.5 percent in 2014, across six different ocular subspecialties. Rates dropped for the first time during this time period to 2.2 percent in 2015 and then to 2.1 percent in 2016. However, the researchers found that after controlling for differences among the types of surgeries, the odds of having an opioid medication filled after any incisional ocular surgery was over three times higher in 2014-16 compared to 2000-04.

While opioid prescription rates for eye surgery patients were small compared to other types procedures—a recent study found, for instance, that nearly half of new mothers in the U.S. were prescribed opioids before or after delivery over the last decade—the considerable uptick across all ocular subspecialties is concerning to the researchers. For cataract surgery, for instance, VanderBeek could not explain the jump in opioid prescriptions from 0.4 percent in year 2000-1 to 1.4 percent in 2014, as he noted that this specific procedure is not typically painful for patients.

“Each subspecialty is completely unrelated to the other, and yet we saw opioid rates rise almost identically through the years in every single category,” VanderBeek said.

Opioid overdoses accounted for over 47,000 deaths in 2017, more than any previous year on record, according the U.S. Department of Health and Human Services (HHS). Many experts have attributed the current opioid epidemic to a rise in prescription opioid medications in the ’90s and early 2000s, which led to their widespread misuse. In response to the opioid crisis, the HHS released a report in 2019 on acute and chronic pain management, and governing bodies of some medical specialties have created specific guidelines for opioid prescribing. However, given the few number of studies that characterize how opioids are used in ophthalmic settings, there are no specific guidelines for their use in eye surgery.

VanderBeek and his team set out to better understand the relationship between opioids and incisional eye surgeries, as well as whether there is a connection to demographic factors, including race and geographic location. For their study, the researchers used data from a large national U.S. insurer’s medical claims database to evaluate filled prescriptions between year 2000 and 2016. (The years 2000 and 2001 were combined due to low number of surgeries meeting inclusion criteria in 2000.) In total, 2,407,962 incisional ocular surgeries were included in the study, and patients from all 50 states were represented. While only 45,776, or about 2 percent of all surgeries, were associated with an opioid prescription, the researchers found a steady rise from 2000 to 2014. Grouping the years into four to five-year cohorts also showed a similar trend.

When comparing opioid fills with demographic data, the researchers found that geographic location was highly associated with odds of filling an opioid prescription after eye surgery, with the lowest odds in the Northeast and the highest in the Mountain states. Decreased opioid prescription rates in the Northeast have been found in other studies, the authors write, and may be due to state-specific regulations. Odds of filling a prescription were also higher for blacks, males, and for those without a bachelor’s degree.

The study authors note that the increase in opioid rates over time is inconsistent with recent trends in ophthalmic surgery, which have included smaller incisions, as well as a shift toward topical anesthesia, which is intended to result in shorter recovery periods and high patient satisfaction. While the reasons for the steady increase remains unclear, it is likely multifactorial, VanderBeek said. Potential reasons may include insufficient physician education regarding opioid prescribing, increased focus on pain management following the induction of pain scales in the early 2000s, and a lack of standard state and national opioid prescription regulations.

“It is our hope that these findings shed light on the trends in opioid medication filling patterns after incisional surgery and will motivate clinicians to evaluate their opioid medication prescribing practices,” said the study’s first author Anton M. Kolomeyer, MD, Ph.D., who was a fellow at Penn Medicine when he conducted the study. As a caveat, the study authors noted that they analyzed data for “prescriptions filled” rather than “prescriptions written,” and that they were unable to look at numbers past 2016, when the HHS declared opioid use a public health emergency.

VanderBeek, who performs retina surgeries, said his standard clinical strategy is to recommend over-the-counter pain medications post-operatively and provide patients with a pain “block” during the surgery which lasts for several hours after the surgery.