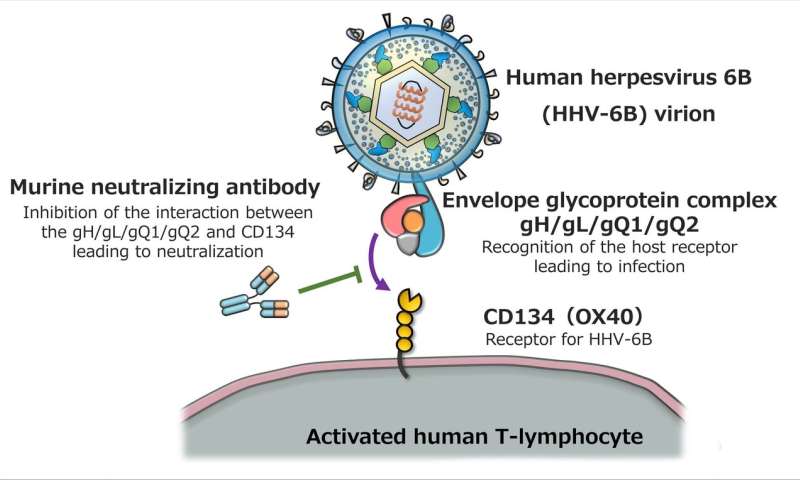 A research group led by Professor Yasuko Mori (Division of Clinical Virology, Center for Infectious Diseases, Kobe University) has succeeded in humanization of mouse antibodies that can neutralize the infection caused by human herpesvirus 6B (HHV-6B). Infection by HHV-6B in infants can lead to complications such as encephalitis—brain inflammation—but an effective way to control the infection has not yet been found. Professor Mori’s research team created “humanized” antibodies based on the mouse (murine) antibodies for HHV-6B. The findings were published on March 6 in the online edition of the Journal of Virology.

Almost every child between the ages of six and 18 months will become infected with HHV-6B. The initial infection causes sudden-onset fever and rash. The condition has a favorable prognosis, but roughly 150 cases a year result in encephalitis and around half of these patients are left with neurological complications. HHV-6B remains latent in our bodies after initial infection, and can reactivate when our immune system defenses are low. This can be particularly bad for patients who have received stem cell transplants, who can experience frequent and life-threatening encephalitis after transplantation.

Professor Mori’s team had already identified the protein complex gH/gL/gQ1/gQ2 as an essential factor for HHV-6B infection, and the human cellular receptor CD134 (OX40) that expresses on stimulated T-cells, the targets of infection. They showed in previous studies that the interaction between this protein complex and receptor is the key to infection (Figure 1). By creating monoclonal antibodies from mice, they showed that antibodies which block the activity of the gH/gL/gQ1/gQ2 complex can be used to regulate the HHV-6B infection (figure 1). The team’s next goal is to develop clinically applicable treatment that can tackle the HHV-6B gH/gL/gQ1/gQ2 complex. 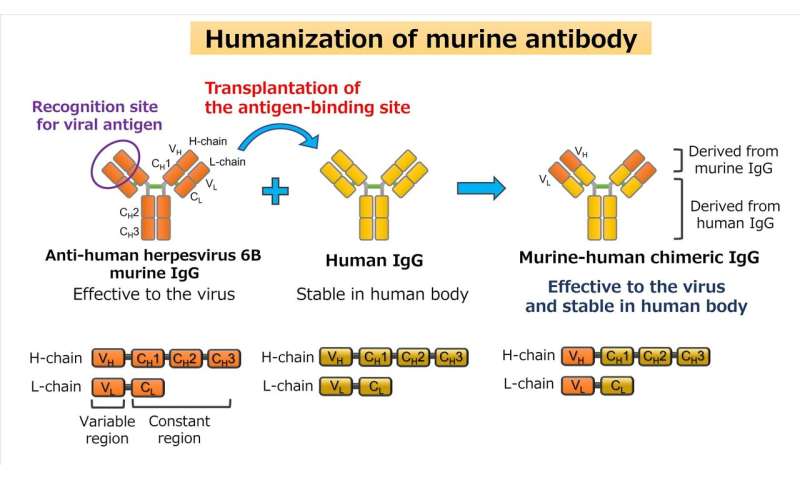 However, antibodies from mice are targeted by the human immune system and destroyed when they enter our bodies, so further alterations are necessary to suppress the immune reaction in our bodies before this can be used in clinical settings. Using gene-altering technology, the team tested the humanization of mouse antibodies: they created a chimeric antibody by replacing the mouse antibodies with human antibodies in the constant domain, only leaving the parts in the variable domain that directly act against HHV-6B.

In this study the team altered two types of mouse IgG antibodies to target gH and gQ1 in the HHV-6B gH/gL/gQ1/gQ2 complex. First they analyzed the DNA sequence of the mouse antibodies, and made a chimeric human-mouse gene (figure 2). They purified the chimeric antibodies produced by introducing this gene to cell cultures, and confirmed that the antibodies had maintained their effectiveness against the HHV-6B gH/gL/gQ1/gQ2 complex. By carrying out further quantitative analysis they verified that the chimera antibodies were able to block the infection of HHV-6B with the same effectiveness as mouse antibodies.