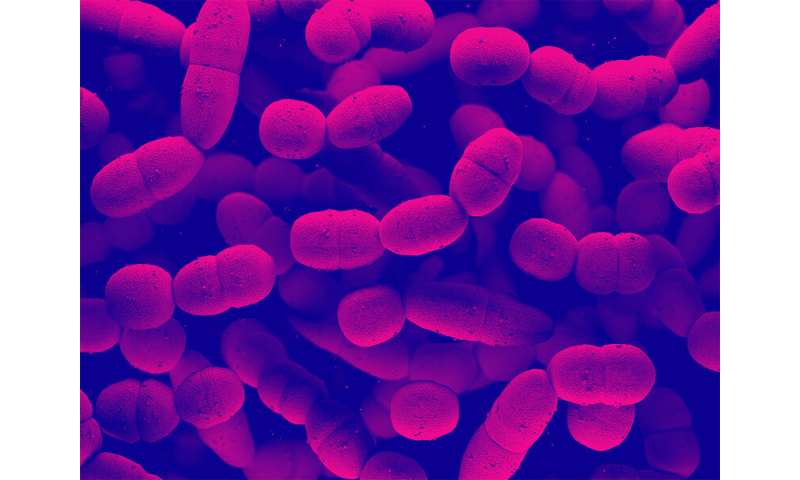 Pneumonia starts like this: A bacterial cell called Streptococcus pneumoniae enters the nostril. It travels down the nasal passage and into the lungs, where a war begins. In the lungs, S. pneumoniae encounters immune cells called macrophages, which will do whatever they can to fight it off.

Remarkably, in this war, the only thing that might stand between full-blown infection and perfect health is a few atoms of copper.

Bacteria need metals like iron, calcium and manganese for every part of their lives. In fact, bacterial cells covet iron so much that many don’t even have a way to get rid of it – only to let it in. They’ll store it for later use if they have to. But copper is one metal that pathogenic bacteria don’t want or need.

That’s why when macrophages find unwanted bacteria in the lungs, one of the first things they do is deliver them to a compartment where they’re starved of the metals they need and instead bombarded with copper. The process is called mismetalization, and it’s deadly.

For University of Arizona immunobiologist Michael Johnson, copper toxicity in bacteria is good news. It offers clues to how antibiotics might be created to treat infections caused by S. pneumoniae, including pneumonia, ear infections, meningitis and pinkeye.

Johnson, an assistant professor of immunobiology in the UA College of Medicine – Tucson, is using a five-year, $1.9 million grant from the National Institute of General Medical Sciences to explore whether copper could be the cornerstone for the next generation of antibiotics. The grant, designed to provide researchers with the flexibility needed to do groundbreaking research, is called a New Investigator Maximizing Investigators’ Research Award.

“Dr. Johnson’s research illustrates the vital importance of basic science in transformational discoveries,” said UA President Robert C. Robbins. “It is also quite fitting that this work is happening in Arizona, where copper has a long history as a major economic driver. Dr. Johnson’s work could be the path to uncovering copper’s potential as a novel, lifesaving tool in the fight against a deadly bacteria, and I am very excited to see the results.”

“This bacteria, Streptococcus pneumoniae, kills 1.5 million people per year, and half of them are under the age of 5. This is despite having a vaccine, which only covers 25 percent of strains. This is a really relevant pathogen, and we need better treatments,” Johnson says. “So it really blew my mind when I found out just how susceptible to copper stress certain bacteria were, and that human bodies can use it to combat bacteria.”

People have long used copper as an antibacterial in a variety of ways – storing food in copper pots, for example. In hospitals, copper surfaces like doorknobs and bedframes are used to cut down on hospital-acquired infections. So, according to Johnson, it only makes sense to explore ways to put copper to use in antibiotics.

Why not just take copper pills? It’s a fair question, but few things in the cellular world are ever so simple. Scientists still don’t have a full understanding of why or how copper is toxic to bacteria in the first place, and, to figure that out, they need to know how exactly bacteria fight it off.

“We need to do this basic science before we are able to create new antibiotics. We need to know how different bacterial systems work in order to target them,” says Johnson, who is a member of the UA BIO5 Institute.

Johnson is focusing his latest study on the copper-sensing protein CopY. Inside a bacterial cell, CopY controls the system that tosses out copper as quickly as possible.

Johnson wants to know exactly how CopY works because it’s the only way bacteria have to protect against certain death when it comes to copper exposure.

“If we can figure out how CopY works, then we can make therapeutics to target it,” Johnson says.

Johnson hopes to elucidate the structure of CopY and nail down the specific pathways it uses to overcome copper stress. These are the first steps to creating an effective therapeutic that will target and shut down CopY.

“We’re making fewer and fewer antibiotics. Antibiotic resistance is going up. That is not sustainable. We need to reverse this trend and find more things that will kill antibiotic-resistant bacteria,” Johnson says.