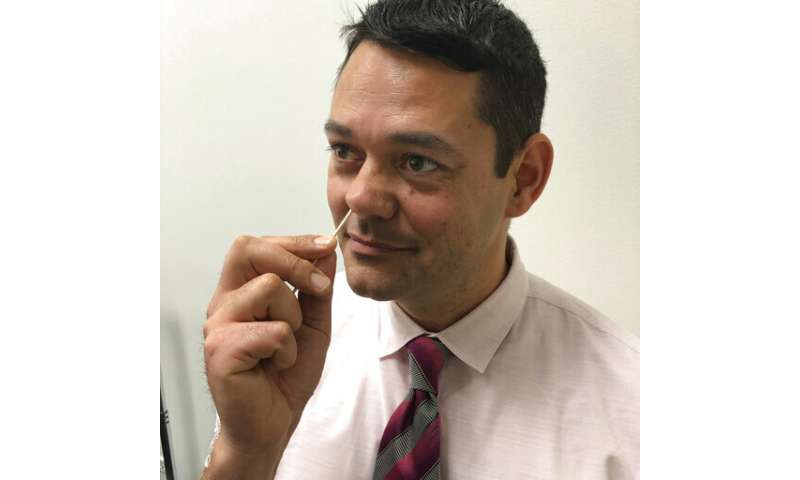 Think of it as decontaminating yourself. Hospitalized patients who harbor certain superbugs can cut their risk of developing full-blown infections if they swab medicated goo in their nose and use special soap and mouthwash for six months after going home, a study found.

It’s a low-tech approach to a big problem: About 5 percent of patients have MRSA—antibiotic-resistant Staph bacteria—lurking on their skin or in their noses, putting them at high risk of developing an infection while recovering from an illness or an operation. These can affect the skin, heart, brain, lungs, bones and joints, and most of them land people back in the hospital.

The hygiene steps that researchers tested trimmed that risk by nearly one third.

“It’s a very simple solution. You don’t have to swallow a medicine, you just have to clean the outside of your body for a little while longer,” said Dr. Susan Huang of the University of California Irvine School of Medicine. She led the federally funded study, published Wednesday by the New England Journal of Medicine.

A lot has been done to curb infections in hospitals and attention is shifting to what happens after patients leave. Nine states—California, Washington, Nevada, Minnesota, Illinois, South Carolina, Pennsylvania, Maine and New Jersey—require that hospitals test the most vulnerable patients, such as those in intensive care, for MRSA. Many other places do it voluntarily.

The study involved more than 2,000 patients at hospitals in southern California who were found to carry MRSA, or methicillin-resistant Staphylococcus aureus bacteria. All were given information on ways to avoid infection, and half also got special products—mouthwash, liquid soap containing an antiseptic and an antibiotic ointment to swab in the nose. They were told to use these Monday through Friday, every other week for six months.

A year later, 6 percent of those in the deep-clean group had developed a MRSA infection versus 9 percent of the others. They also had fewer infections from other germs. Doctors estimated that 25 to 30 people would need to be treated to prevent one case.

There were no serious side effects; 44 people had dry or irritated skin, and most continued using the products despite that.

Heather Avizius was one. The 41-year-old nanny has had MRSA infections in the past and entered the study after severe complications of Crohn’s disease landed her in St. Jude Medical Center in Fullerton, California, eight years ago.

“I took the regimen very, very seriously” and has not had MRSA since, she said. “I felt cleaner and safer” and less worried about spreading germs to her children, she said.

Nearly half dropped out of the study early or couldn’t be found for follow-up.

“Many people may think ‘I feel fine, I don’t really need to do this,'” said Dr. John Jernigan of the U.S. Centers for Disease Control and Prevention. But “the risk doesn’t end once you go home.”

Federal grants paid for the products. They would cost $150 to $200 for six months otherwise, Huang said. The antiseptic soap was a 4 percent chlorhexidine solution sold in many drugstores.

Other soaps, even ones labeled antibacterial, “may not have the active ingredients to remove MRSA,” said Dr. Robert Weinstein, another study leader and an infections specialist at Cook County Health and Rush University Medical Center in Chicago.

It’s worth it for patients to do whatever they can to prevent an MRSA infection, he said.