Cannabidiol could help deliver medications to the brain 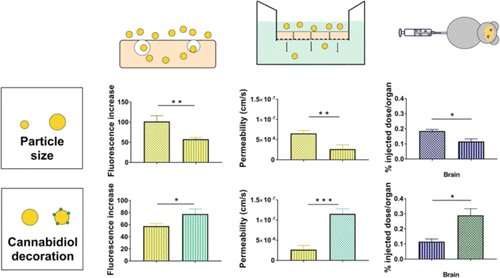 Cannabidiol (CBD), a non-psychoactive compound in cannabis, is being touted as beneficial for many health conditions, ranging from anxiety to epilepsy. Although much more research is needed to verify these claims, scientists have now shown that CBD could have a different use as a “Trojan horse”: helping slip medications across the blood-brain barrier (BBB) and into mouse brains. The researchers report their results in the ACS journal Molecular Pharmaceutics.

The BBB consists of a layer of tightly linked cells that line capillaries in the brain, preventing substances from exiting the blood and entering the brain. However, the BBB does permit some molecules to pass, such as glucose and certain amino acids and neurotransmitters. For example, a class of neurotransmitters called endocannabinoids bind to proteins called cannabinoid receptors in the BBB, and the receptors help transport the molecules across the barrier and into the brain. Ana Torres-Suárez and colleagues wanted to make use of this system to sneak drug nanocarriers into the brains of mice.