Atrial fibrillation is now the leading cause of cardiovascular hospitalisation 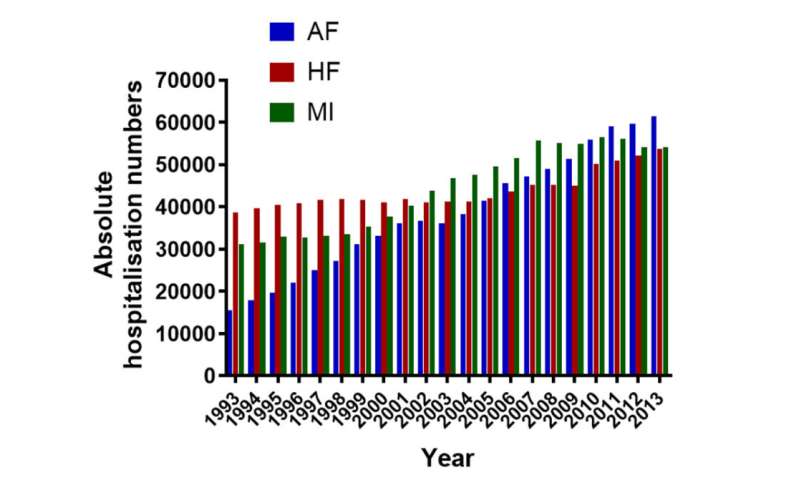 Atrial fibrillation has overtaken heart failure and heart attacks as the leading cause of cardiovascular hospitalisation, a South Australian study has found.

Researchers analysed data collected over two decades by the Australian Institute of Health and Welfare to establish the incidence and trends of common cardiovascular conditions between 1993 and 2013.

Published recently in the journal Heart, University of Adelaide lead researcher Celine Gallagher found atrial fibrillation had the highest incidence of principal diagnosis in 2013 ahead of heart attack and heart failure.

However, in 1993 it was heart failure followed by heart attack and atrial fibrillation that were the most common causes of cardiovascular hospitalisation.

“What our study showed is that over that time period hospitalisations for AF (atrial fibrillation) increased by 295 per cent,” said Gallagher.

AF is an irregular, rapid heart rate that can cause heart palpitations, fatigue, shortness of breath and death.

Researchers from the University of Adelaide Centre for Heart Rhythm Disorders found that the rate per annum of atrial fibrillation hospitalisations began at about 15,000 in 1993 and grew at an annual rate of almost 4 per cent to reach 61,000 in 2013.

“It’s not showing any sign of slowing down or going away.”

Gallagher said the reasons for the rapid increase in AF hospitalisations were not clear from the data. But she said the risk of the condition increased with the presence of other factors such as high blood pressure, obesity, diabetes and life expectancy, which were also on the rise in Australia.

The study found the number of hospitalisations for AF increased across all age groups from the under 50s through to the over 80s.

A cost analysis of the three conditions in the study also found that the rise in AF hospitalisations had led to a cost blowout of 479 per cent over the 20-year period.

Untreated or unsuccessful treatment of atrial fibrillation is also linked to stroke and heart failure.

“About 30 per cent of all strokes are caused by AF,” Gallagher said.

“The fact that you have AF increases your chance of stroke regardless of your symptoms.”

Beginning in June, the researchers will study the effectiveness of treating patients in a holistic outpatient management clinic as an alternative to hospitalisation.

This model would employ a team of healthcare professionals – such as cardiologists, psychologists and dieticians – to treat those with atrial fibrillation on a regular basis.

“We think that by managing their conditions better we can reduce the risk of people going to hospital,” said Gallagher.