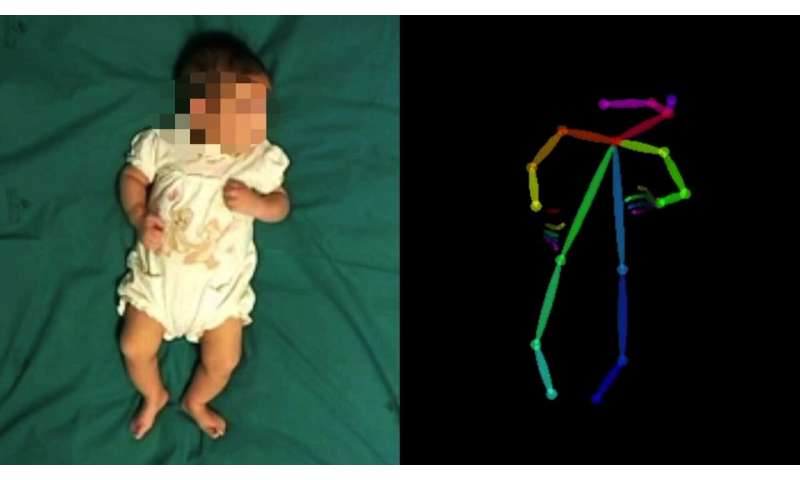 Subtle characteristics in the spontaneous movement of very young babies may reveal clinically important aspects of their neurodevelopment. Visual assessment by a clinical expert of general movements (GMs) representing typical movement patterns is known to be effective in early identification of cerebral palsy (CP).

“A three-month-old infant shows frequently occurring stereotypical, dancing-like movements throughout the body and limbs. A noted absence of them is highly predictive of later emergence of CP,” says Sampsa Vanhatalo, professor of clinical neurophysiology, University of Helsinki.

A very early identification and subsequent therapeutic intervention would be highly beneficial for alleviating the neurodevelopmental impact of CP. Currently, a child is diagnosed with CP at much later age, typically between six months and two years of age. GM analysis holds promise in early detection of CP, but it requires special expertise that is currently obtained through international teaching courses, which effectively limits the number of doctors or therapists with the relevant skills. In addition, GM analysis in its present form is based on visual assessment, which is always subjective.

“There is an urgent need for objective and automated methods. They would allow employing movement analyses at much wider scale, and make it accessible to basically most, if not all, children in the world,” says Vanhatalo.

The stick man reveals the essentials

Researchers at University of Helsinki and University of Pisa set out to explore the possibility that a conventional video recording of an infant lying in bed could be transformed to a quantified analysis of infant movements. They collaborated with personnel from Neuro Event Labs, an AI company based in Tampere. They were able to create a method for an accurate extraction of children’s movements using a technique known as pose estimation, allowing for the construction of a simplified “stick man” (or skeleton) video.

Next, the researchers gave the videos to doctors with GM expertise to determine whether diagnostically crucial information was preserved in those videos. Using the stick figure videos alone, the doctors were able to assign diagnostic groups in 95 percent of cases, proving that the clinically essential information had been preserved.

The study shows that an automated algorithm may extract clinically important movement patterns from normal video recordings. These stick figure extractions can be directly used for quantitative analyses. To demonstrate this potential, the researchers provided a proof of concept analysis in which simple measures of stick figure movements showed clear differences between groups of infants with either normal or abnormal movements.

Use of stick figure videos also enables sharing among research communities globally without privacy concerns. This has been a significant bottleneck in setting up multinational research activities within this domain.

“This will finally enable a genuinely Big Data kind of development for better quantitative movement analyses in infants,” Vanhatalo says.

“Since this study, we have collected larger datasets, including 3-D video recordings, and we are currently developing an AI-based method for infantile motor maturity assessment. The rationale is straightforward: There is a developmental issue with the child if the computational assessment of the motor maturity does not match with the child’s true age.”

In addition to early CP detection, automated movement analyses have many potential applications in the assessment of infant neurological development. “We could create a kind of functional growth chart,” says Vanhatalo.

Movement analyses could also be used in diverse ways to improve therapeutic decisions. Such methods could provide quantitative means to objectively measure efficacy of therapeutic strategies, one of the hot topics in modern restorative medicine. Automated movement analyses could also allow out-of-hospital screening of children to identify those that need further care, or to provide assurance of normality in cases with concern about child’s development.