Home » Health Problems » After decades of little progress, researchers may be catching up to sepsis

After decades of little progress, researchers may be catching up to sepsis 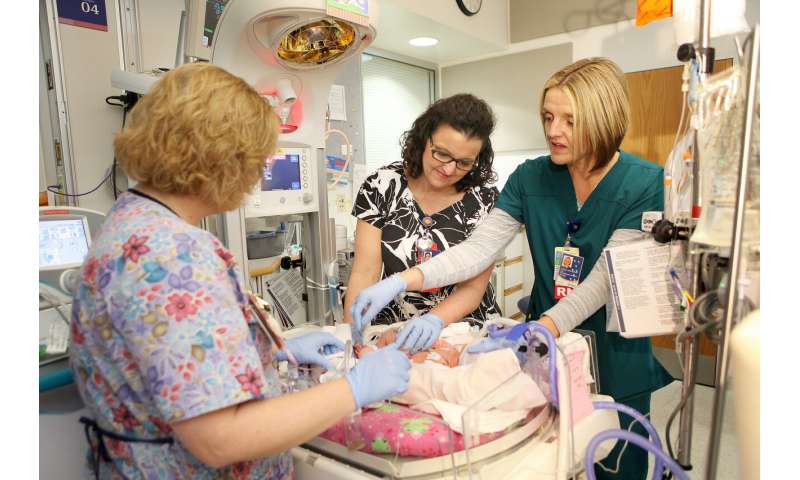 After decades of little or no progress, biomedical researchers are finally making some headway at detecting and treating sepsis, a deadly medical complication that sends a surge of pathogenic infection through the body and remains a major public health problem.

Researchers at Cincinnati Children’s Hospital Medical Center report in Science Translational Medicine they developed and successfully tested a new rapid blood assay that measures five biomarkers and accurately predicts which patients are at low, medium or high risk for death from sepsis (colloquially referred to as blood poisoning).

Called PERSEVERE, the test allows physicians to detect and stratify sepsis at its earliest moments, just as the body is about to unleash a storm of bacterial infection, according to study’s senior investigator, Hector Wong, MD, director of Critical Care Medicine at Cincinnati Children’s. By knowing which five proteins/genes make up the assay’s five-biomarker blood panel, physicians should be able to start medical interventions much earlier and with greater precision.

Wong said not only can patients be stratified into low, medium and high-risk groups, the biomarker test allows physicians to pick the right interventions for specific patients, including which drugs and dosages.

“The PERSEVERE platform focuses on stratification and prognostication, not diagnostics,” says Wong. “Prognostic enrichment is a fundamental tool of precision medicine. It allows us to predict the disease course and progression in individuals and tailor treatment to different groups of patients and individuals.”

Another benefit of the assay platform is it also gives researchers important clues for studying the underlying biological mechanisms of how sepsis gets started, ramps out of control and how it can be stopped with new therapeutic approaches, according to Christopher Lindsell Ph.D., a key collaborator on Wong’s team formerly with the University of Cincinnati School of Medicine and now at the Vanderbilt University Medical Center.

The research project is also expected to lead to the development of new therapeutic treatments, the researchers said.

The tool has been in development by the research team for more than a decade. They have able to progressively reduce the number of biomarkers in the assay platform from 80 down to five. This makes it easier to blend advanced technologies like computer-assisted biology and informatics with laboratory experimentation to look more efficiently for new therapies, according researchers.

Sepsis usually strikes fragile young children and the elderly hospitalized in intensive care units. The complication kills more than 200,000 people a year and costs the health care system billions of dollars, according to research data published by the National Institutes of Health. In the current study, about 13 percent of patients did not survive, but PERSEVERE-based stratification effectively stratified the patients into three risk categories with widely different mortality rates. Wong said the goal of the research team’s work is to push those survival curves significantly higher among the higher risk patients.

A major hurdle frustrating researchers over the decades is that sepsis is known for its considerable clinical and biological heterogeneity, with the causes and outcomes varying greatly between different patients. PERSEVERE is designed to leverage today’s enhanced genetic and biological analysis technologies to make that variability more manageable.

Although more than 1,000 children have been tested by Wong and colleagues over the years, in the current study researchers used the latest version of PERSEVERE to test the blood samples from 461 children with sepsis as well as mouse models that faithfully mimic blood poisoning.

After receiving prior permission from patient families and Institutional Review Boards of participating institutions, the researchers used PERSEVERE to test children between ages 1 and 18 years who were already admitted to intensive care units and under care for sepsis at multiple pediatric hospitals, including Cincinnati Children’s. Because PERSEVERE is not yet approved for clinical use, it was not used to inform or influence patient care decisions. It was only tested for accuracy and potential future use.

Researchers said the five biomarkers in PERSEVERE were able to accurately predict with high reliability which patients would and would not develop severe cases of sepsis. When researchers next tested PERSEVERE in their mouse models of sepsis, the same five biomarkers were able to accurately predict which mice were at low or high risk. They also reported that mice at a greater risk of severe sepsis had significantly higher bacterial loads in their blood than lower-risk animals, and that higher doses of antibiotics were able to help contain the blood infections. The investigators also provide corroborating evidence that children with higher risk of mortality from sepsis also have higher bacterial loads in their blood.

Wong said the research team continues to test and refine PERSEVERE and study the biological clues it has uncovered so far to pinpoint the onset molecular bases of sepsis and find new treatments. The ability to study the biology of sepsis in mouse models that faithfully mimic the condition and have the same biomarkers as humans should allow the researchers to make significant new progress. Wong also said the technology has reached the point where it would benefit from a biotech industry partner and collaborator so the platform’s development can be accelerated and tested in clinic within the next few years.