A model for brain activity during brain stimulation therapy 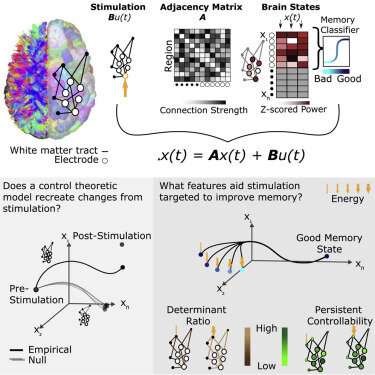 Brain stimulation, where targeted electrical impulses are directly applied to a patient’s brain, is already an effective therapy for depression, epilepsy, Parkinson’s and other neurological disorders, but many more applications are on the horizon. Clinicians and researchers believe the technique could be used to restore or improve memory and motor function after an injury, for example, but progress is hampered by how difficult it is to predict how the entire brain will respond to stimulation at a given region.

In an effort to better personalize and optimize this type of therapy, researchers from the University of Pennsylvania’s School of Engineering and Applied Science and Perelman School of Medicine, as well as Thomas Jefferson University Hospital and the University of California, Riverside, have developed a way to model how a given patient’s brain activity will change in response to targeted stimulation.

To test the accuracy of their model, they recruited a group of study participants who were undergoing an unrelated treatment for severe epilepsy, and thus had a series of electrodes already implanted in their brains. Using each individual’s brain activity data as inputs for their model, the researchers made predictions about how to best stimulate that participant’s brain to improve their performance on a basic memory test.

The participants’ brain activity before and after stimulation suggest the researchers’ models have meaningful predictive power and offer a first step towards a more generalizable approach to specific stimulation therapies.

The study, published in the journal Cell Reports, was led by Danielle Bassett and Jennifer Stiso, a neuroscience graduate student and a member of Bassett’s Complex Systems Lab.

Memory is just one area where electrical stimulation therapy is thought to have promise, but more basic research on how to coax brain activity into the desired state is needed.

“There are patterns of activity across the entire brain when you’re remembering something, and those patterns look different depending on how well you’re doing,” Stiso says. “We know electrical stimulation can change those patterns, but how to change them into the pattern associated with better performance isn’t clear.”

With a collaboration between neurologists at the Hospital for the University of Pennsylvania and Thomas Jefferson University Hospital, the researchers found epilepsy patients with implanted electrodes who were willing to volunteer to receive targeted stimulation during direct brain recordings while they awaited surgery.

While their brain activity was being recorded, the patients participated in basic memory tests, which entailed hearing and recalling a list of words.

“We then used features of those individuals’ brain activity, and the pattern of connections between their brain regions, to model what would happen to the whole brain when we stimulate a specific region,” Stiso says. “A lot of memory research is focused on specific regions of the brain, like the hippocampus, but we think these therapies need to take a much larger network of regions into account.”

Combined with data from other stimulation experiments conducted with these epilepsy patients, these models suggested which specific patterns of brain activity and connections would be most beneficial when the stimulation was targeted to improve memory.

“Using in silico experiments, we found that stimulation that had been optimized based on the model pushed the brain towards states of good memory performance,” says Bassett.