Mother-to-be, 26, has pioneering surgery on her baby while it’s still in the WOMB to correct a spina bifida birth defect

A pregnant women has become one of the first in the UK to have pioneering surgery on her baby’s spine while it is still in the womb.

Bethan Simpson, 26, of Burnham, Essex, was first advised to terminate her pregnancy when doctors discovered her baby had the birth defect spina bifida during her 20-week scan.

Refusing to give up on her little one, Mrs Simpson and her husband, Kieron, opted for foetal repair.

This involves doctors operating on the baby’s spinal cord while it is still in its mother’s uterus.

The surgery was a success and Mrs Simpson is now due to give birth to a baby girl in April.

Until now the operation has only been carried out in Belgium, where a handful of British babies have been successfully treated in recent years, with all doing well. 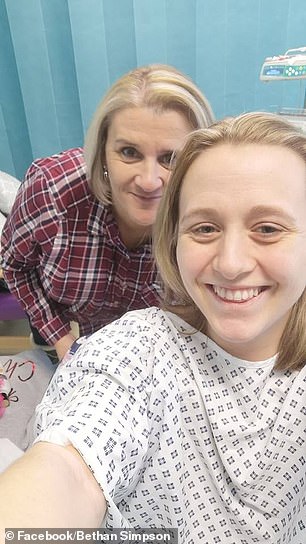 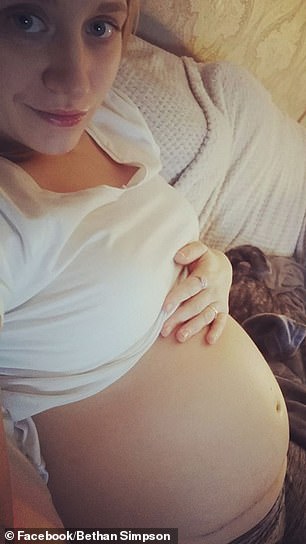 Bethan Simpson (pictured left with her mother in hospital) is one of the first women in the UK to have pioneering womb surgery before giving birth. She discovered her baby has spina bifida during a scan and was offered foteal repair surgery to position the little one’s spinal cord to its spinal canal while in the womb. She is pictured right after the operation with her scar visible 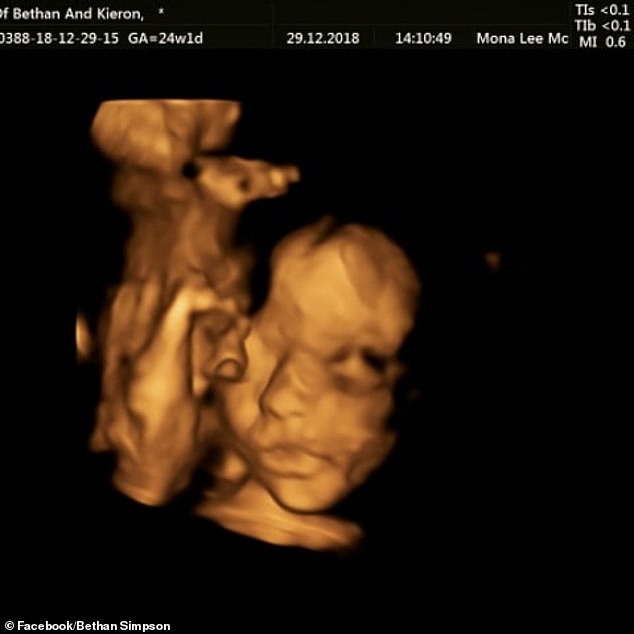 Mrs Simpson’s routine 20-week scan (pictured) revealed her baby’s head was not the size it should be. She was then referred to Broomfield Hospital in Chelmsford, Essex, where doctors diagnosed the youngster with spina bifida. Doctors at first recommended a termination

Mrs Simpson discovered her baby’s head was not the right size during a routine scan.

She was sent to Broomfield Hospital in Chelmsford, Essex, where doctors diagnosed the youngster with spina bifida.

‘Fast forward 48 hours and we were in London having scans on her head and spine,’ Mrs Simpson said. ‘With that we were told our little girl had spina bifida.

‘We were offered continuing pregnancy, ending pregnancy or a new option called fetal surgery – fixing her before she is born. We agreed to do it.’

WHAT IS FOETAL REPAIR FOR SPINA BIFIDA?

Foetal repair for spina bifida is a delicate operation where surgeons open the womb and close the opening in the back of the baby’s head while it is still in the uterus.

It does not cure the condition but studies show it significantly improves results over surgery that is carried out after the baby has been born.

The procedure also boosts the child’s chances of having good mobility and being able to walk independently.

It takes place between 19 and 25 weeks into the pregnancy.

The mother requires a general anaesthetic that relaxes the uterus and acts as a painkiller for the baby.

A surgeon then cuts an incision across the mother’s abdomen and positions the baby’s spinal cord to the spinal canal.

The doctor also closes surrounding tissue and skin to protect the spinal cord from exposure to amniotic fluid.

Mrs Simpson then underwent numerous scans and fluid tests to see if she was eligible for the operation.

The criteria for the procedure is strict, including the mother not having any placenta problems, a short cervix or an obese BMI.

‘We got approved and we planned for surgery,’ she said.

‘Our lives were such a rollercoaster for the next few weeks.’

Around 24 weeks into Mrs Simpson’s pregnancy, she underwent foetal repair for spina bifida.

‘I had the most recognised surgeons from around the world from University College London Hospital and Belgium looking after me,’ she said.

The operation involved positioning the baby’s spinal cord to its spinal canal.

Mrs Simpson is said to be doing well and is looking forward to welcoming her baby girl in two months’ time.

Speaking of the ordeal, she said: ‘Sadly 80 per cent of babies in England are terminated when their parents get told their baby has this condition.

‘It’s not a death sentence. She has the same potential as every one of us.

‘Yes, there are risks of things going wrong but please think more about spina bifida, it’s not what it used to be.

‘I feel our baby kick me day in and day out, that’s never changed.

‘She’s extra special, she’s part of history and our daughter has shown just how much she deserves this life.’ 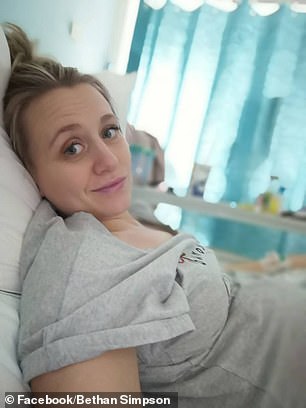 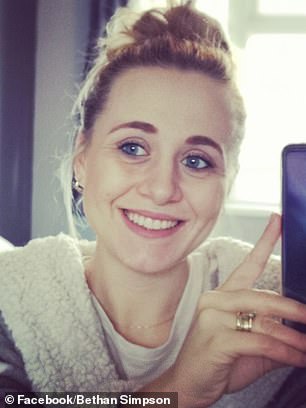 Refusing to give up on her pregnancy, Mrs Simpson (pictured left while in hospital for the procedure) had an incision made across her abdomen so doctors could correct the birth defect while her baby was still in her uterus. Pictured right after the operation, Mrs Simpson is thrilled the surgery was a success and is looking forward to welcoming her daughter in April

What is spina bifida?

Spina bifida is a fault in the development of the spine and spinal cord that leaves a gap in the spine.

Most cases are detected before birth, at the 20-week scan.

The membranes and spinal cord push out to create a sac in the baby’s back.

This sometimes leaves the nervous system vulnerable to infections that may be fatal.

In most cases surgery is carried out to close the gap in the spine after birth.

But damage to the nervous system will usually already have taken place, resulting in:

Most babies with myelomeningocele will also develop hydrocephalus, with excess cerebrospinal fluid (CSF) pooling inside the brain.

This is caused by a malformation at the base of the skull in which the lower parts of the brain are pushed down towards the spinal cord.

Babies with hydrocephalus are fitted with a shunt after birth to divert the fluid from the brain, so reducing the risk of increasing cranial pressure, into the abdominal cavity.