Home » Health News » Why do I always wake up with a blocked nose?

Why do I always wake up with a blocked nose? 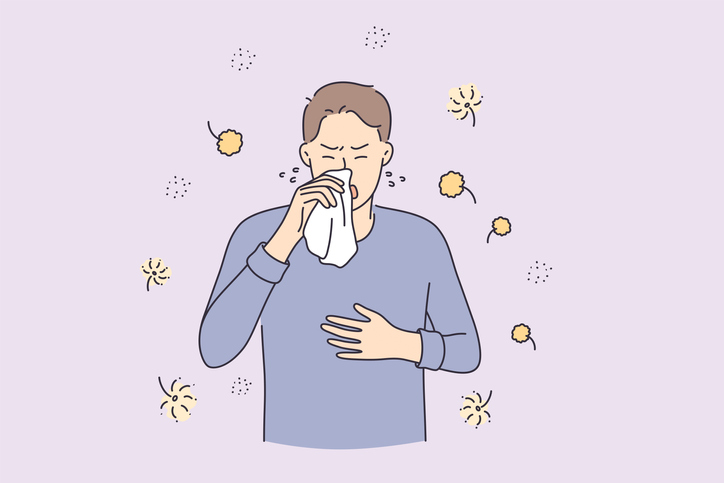 It’s the morning! The birds are singing, the sun is shining and… you can’t smell the potential of the day ahead.

Nor delicious toast in the toaster. Or the fragrant cup of coffee you’re about to drink. Because your nose is blocked.

And so you sigh. Because your nose is always, very annoyingly blocked first thing in the AM.

Sadly, this problem isn’t uncommon. Many people just like you are sick and tired of waking up with a stuffed-up schnozzle.

Usually, a congested conk is the result of inflammation of the nasal passages, explains the Mayo Clinic. But the cause of said inflammation really can vary.

And, of course, there are some other potential reasons why you wake up with a blocked nose.

Here, we’ll explore a few – and what you can do about it.

Possible reasons your nose is blocked when you wake up

Having an allergy or a sensitivity to something around you could be causing you to wake up bunged up.

What the allergen might be will vary, though the usual culprits are things such as pollen, dust mites, pet dander (their skin or saliva), pet hair, etc.

If you’re a known hayfever sufferer, that could explain things. And if you haven’t hoovered behind your bed for months (years?!), then it’s worth doing to check a dusty room isn’t irritating your nose at night.

If you have pets, try to keep them off the bed for a while and hoover it regularly, to see if that helps.

Avoid tobacco smoke and areas full of pollution where possible, and anything else that might irritate your nose.

GPs can diagnose allergic rhinitis – and usually the diagnosis will then be confirmed if you respond to treatment (antihistamines).

If all else fails, they can send you for allergy tests to narrow things down.

When there isn’t much moisture in the air, or the humidity is very low, the inside of your sinuses (called mucous membranes) can dry out.

This can happen when it’s cold outside – and you’ve got the heating on full blast most of the time.

This dryness can cause your nose to feel dry and stuffy, and possibly cause you to have a dry mouth, sore throat and even potentially a nosebleed.

The solution is simple: you need some moisture-packed air back into your house. Open the windows, get some fresh air, and try running a humidifier at night.

Make sure you’re drinking plenty of water, too, as your body needs to stay hydrated.

Nasal sprays or nasal irrigation treatments, such as the neti pot (which washes your sinuses out with saline water), can help – but keep in mind they’re a temporary fix.

Best to ask your local pharmacist for their recommendation.

Wake up with a blocked nose after a big meal the night before? Or after eating certain foods, such as acidic fruits or spicy dishes?

Or do you already know that you typically suffer from acid reflux, or Gastro-oesophageal reflux disease (GERD or GORD), but just haven’t connected the dots yet?

Well, yep, it could be that reflux is causing you to have a blocked nose. When you’re asleep lying down, it’s possible for acid to travel towards your nose and sinuses.

It can cause a post-nasal drip, which is when mucous from your nose drips down into your throat – which can cause a chronic cough, as well as leave you feeling bunged up.

Treating the reflux is your best bet here – whether through a controlled diet or medication. For the right solution relevant to you, speak to your GP about your symptoms.

And if you can, try to sleep propped up a bit, rather than completely flat. See if that makes a difference.

If you’ve only been dealing with a blocked nose in the mornings for a few weeks, you may just have a normal cold.

There’s not much you can do about that, other than try some home remedies to ease the symptoms.

Sinus infections – called sinusitis – can also cause blocked noses, as well as pain around your sinuses, excess mucous, headaches, earaches, a high temperature and even toothache.

Sinus infections can last for a few weeks. If you suspect one, the NHS recommends seeking advice from your local pharmacy if symptoms are fairly mild.

The health service advises rest, plenty of fluids, trying paracetamol or ibuprofen for any pain, and temporarily using a nasal spray or solution to wash our your sinuses.

If symptoms don’t improve after a week, or you’re having severe symptoms, then the NHS advises you should contact your GP.

Expecting? It’s oft-reported that changes to your hormones during pregnancy can cause congestion.

Progesterone – aka the pregnancy hormone – can actually dilate your nasal passages, leading to that blocked up sensation and all of the discomfort it entails.

The site notes that it can last longer than six weeks, and can appear from your second trimester onwards – but it should go away after you’ve given birth, if not before.

Keep in mind that sinus infections are also common during pregnancy, according to MadeForMums.

Of course, if you have any concerns about your health during your pregnancy, speak to your midwife or GP about your symptoms as soon as possible.

Nasal polyps or a physical cause

Nasal polyps are another condition that can cause a blocked nose – though probably not just in the morning.

The NHS describes the polyps as ‘painless, soft growths’ inside your nose, arising symptoms such as runny nose, post-nasal drip, snoring and a reduced sense of smell.

If you’re worried about polyps, the NHS advises you to speak to your GP, as well as if symptoms worsen or breathing becomes difficult.

People with deviated septums – the name for an incorrectly-placed septum, which makes one of your nasal passages smaller than the other – might also find they are frequently congested.

They may also experience frequent, recurring sinus infections or headaches. A surgical procedure called septoplasty can fix a deviated septum… if you are diagnosed with one.

Finally, you know all that small print you get inside a packet of tablets, drops or nasal spray used to treat congestion?

Well, you should read it – as it will usually explicitly tell you how long it’s appropriate to use the medication for.

Because, ironically, if you’ve been relying on over-the-counter remedies for treating your morning blocked nose for some time, it could be the case that continued use is hindering not helping.

The NHS website sums it up succinctly: ‘Decongestant nasal sprays and drops should not be used for more than a week at a time because using them for too long can make your stuffiness worse.’

Separately, a less-likely side effect is that they can irritate inside your nose… the opposite of the intended outcome.

It’s not just decongestants that block your nose – other medications can, too.

Certain medications designed to treat depression, erectile dysfunction and high blood pressure can make your nose feel blocked, according to the Mayo Clinic.

Sleep apnea, or other sleep conditions such as bruxism (also called TMJ, essentially grinding your teeth while you sleep), can contribute to sinus-related issues, in addition to myriad other symptoms.

In some serious cases, a blood vessel disorder such as Churg-Strauss Syndrome could be the culprit.

How to stop having a blocked nose in the morning

It’s hard to say without knowing exactly what the cause is, so a good first step is narrowing down your individual issue.

Nasal sprays, drops and saline irrigation solutions can be a good (temporary) fix for some people – while some may find a humidifier or limiting contact with an allergen helps.

Just got a cold? There are a few unblock-your-nose-quick fixes you can try for some immediate relief.

Some anti-allergy treatments (antihistamines) are available over the counter from your local pharmacy, Boots, even in supermarkets – but chat to the pharmacist before buying.

Meanwhile, long-term sufferers will likely need to chat to their GP, as will anyone concerned about a physical issue.

As an aside, drinking lots of water and fluids is a good way to ensure your body is hydrated. And it’s vital to practice good sleep hygiene, such as ensuring you’re getting enough sleep and sticking to a routine.