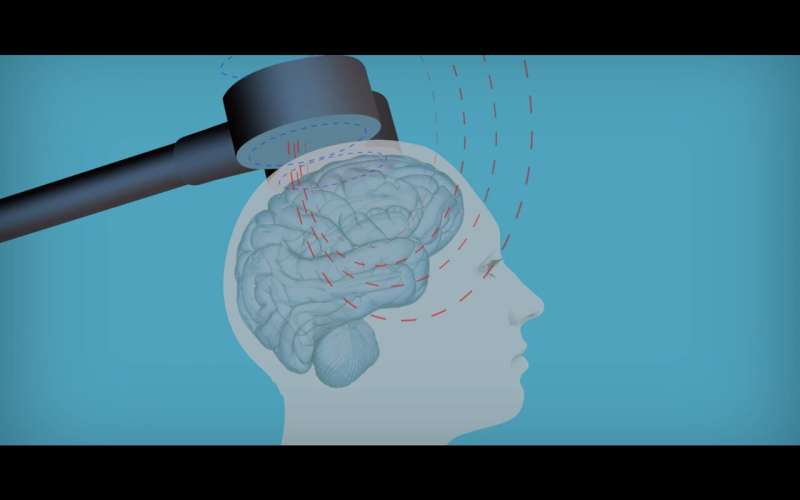 In the U.S., rTMS was cleared by the Food and Drug Administration (FDA) in 2008 to treat patients suffering from treatment resistant depression, or in other words, patients who do not respond to standard antidepressants. It has since been approved or recommended in several other countries. The main advantage of rTMS is that it is a non-invasive, drug-free, and safe alternative treatment that really works: up to half of the patients for whom other antidepressant strategies have not worked will respond to rTMS.

This treatment would seem perfectly suited for older patients, given that they often suffer from various comorbidities and are typically taking several other medications that may complicate the use of regular antidepressants. However, since the early 2000s, it has been widely believed that rTMS is not beneficial for older patients. Gonçalo Cotovio, doctoral student in the Neuropsychiatry Unit and psychiatry resident in Centro Hospitalar de Lisboa Ocidental, is first author of a new paper published in Frontiers, addressing this problem. According to Gonçalo, “while currently approved treatments require at least 4-6 weeks of treatment, many of the early papers used data collected from patients undergoing just 2 weeks of rTMS treatment, and this may be insufficient to obtain efficacy, particularly for older patients.”

Gonçalo continued, “Amongst our group [the Neuropsychiatry Unit] and our collaborators in the United States [Harvard Medical School and Iowa University] this just didn’t add up. We were observing many of our own older patients responding well to treatment and felt frustrated that others were being denied access to this treatment without clear evidence to support this decision. Particularly when one considers that, namely in the US, some insurance companies do not cover this treatment for older patients. We felt we had to look into this further.”

Working with other rTMS centers from the U.S., in a multi-center study, one of the largest samples of patients who had received rTMS to treat depression (more than 500 patients) was collected. Patients were divided into two groups: one under 65, the other 65 or above. The results obtained when comparing these two groups backed up the researchers’ doubts—older adults responded just as well to rTMS, but the effects took a little longer to be felt. “Over the first two weeks of treatment, as the older data suggested, it is true that older patients showed little or no response to rTMS,” confirmed Gonçalo, “but the older group soon caught up and, by the end of the course of treatment, we observed that rTMS was just as effective as for younger patients.”

“In fact, these results are in line with findings from another study by our group, which was published last year in the Journals of Gerontology, and resulted from a collaboration with Univerisidade de São Paulo. In that paper we analyzed the available literature and found evidence to support that rTMS was an effective and safe antidepressant strategy for older adults, and also that better responses were observed with longer courses of treatment,” says Albino J. Oliveira-Maia, senior psychiatrist and head of the Champalimaud Foundation’s Neuropsychiatry Unit, who was principal investigator of both studies.

The paper suggests a full review of policies and protocols around the use of rTMS to treat older patients with treatment resistant depression, hypothesizing that further studies are needed to examine if the current treatment plan (typically 4-6 weeks) should be increased for the over-65s. Currently, it is felt that there are many older people who are not being given access to this viable, and effective treatment. As Gonçalo concludes, “hopefully this study may highlight the utility of rTMS as an important tool in treating depression for people of all ages.”

“In fact, this study’s conclusions build upon the already available evidence showing that rTMS is an effective treatment for depression, supporting that rTMS should be more broadly available,” Albino notes, “At the moment, in Portugal, rTMS is not a standard treatment offered by the national health service nor funded by insurance companies, despite there being a clear evidence-base supporting its use for a condition with many unmet needs, as we and many others have shown. We definitely need to make these treatments available for those in need and with very few other options.”