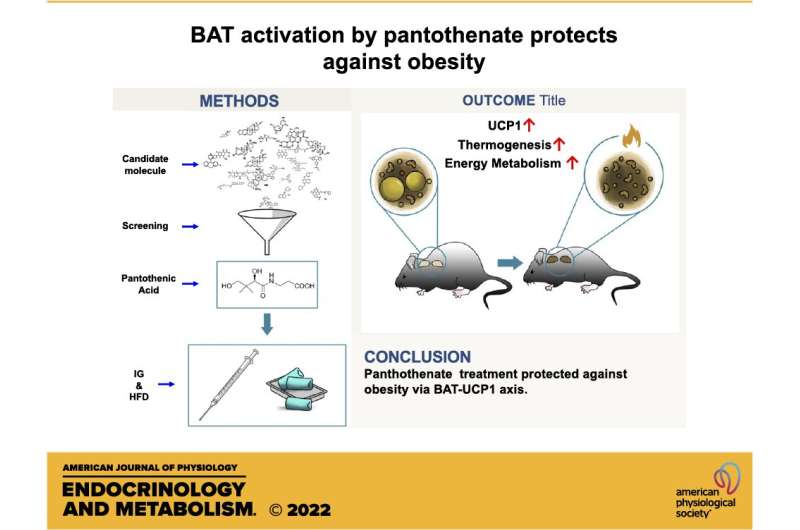 Pantothenate acid, also known as vitamin B5, stimulated the production of brown fat in both cell cultures and mice, a new study finds. The study is published ahead of print in the American Journal of Physiology-Endocrinology and Metabolism. It was chosen as an APSselect article for July.

“We identified [pantothenate acid] as an effective [brown fat] activator that can prevent obesity and may represent a promising strategy for the clinical treatment of obesity and related metabolic diseases,” the researchers wrote.

Unlike the more common white fat, brown fat burns calories to produce heat. Under particular conditions, white fat can be converted to brown fat. Scientists have been investigating the behavior of brown fat and methods of converting white fat in hope of finding treatments for obesity.

The research team selected vitamin B5 from among compounds that showed potential because of its safety and ease of access. They treated cell cultures of human tissue with vitamin B5. After six days, the cells showed a rise in a number of markers that indicate an increase in mitochondria—a part of the cell that burns calories and which brown fat has in greater quantity than white fat. Staining the tissue also demonstrated an increase in brown fat.

They then fed male mice a high-fat diet and treated them for 11 weeks with either vitamin B5 or a saline solution as a control. The vitamin B5-treated high-fat mice showed reduced fat not only overall but, specifically, less fat just under the skin and in the liver compared to those not given vitamin B5. The two groups had a comparable amount of muscle, a sign the weight loss was from reduction in fat.