The ‘Mask Nerd’ of Minneapolis wants you to be safe 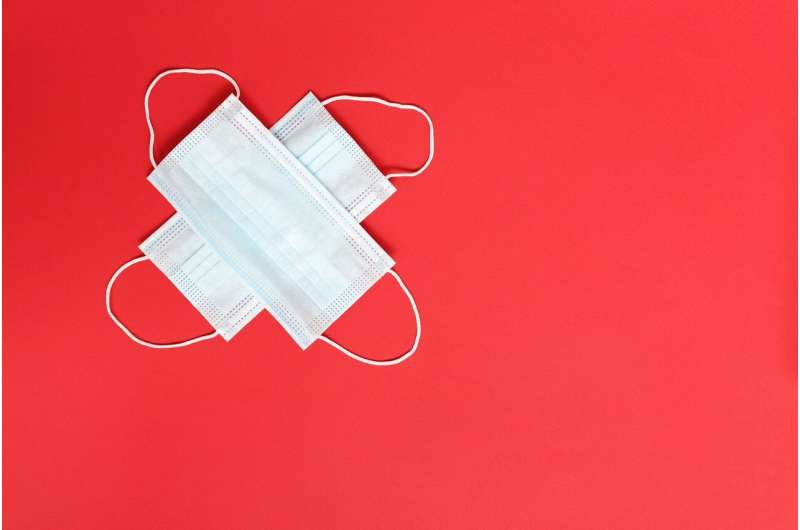 Here in the “lab” at his Minneapolis home, Collins is launching experiment No. 520—the latest installment in his 18-month quest to help people use masks for better protection against COVID-19.

Just a few minutes earlier, Collins turned off a machine whirring like an air compressor that’s perched at the edge of his bathroom sink. A clear tube leads from the mask he’s wearing to a separate piece of scientific equipment sitting on the window sill.

Collins, 37, points excitedly to the screen on his laptop where a squiggly line has suddenly fallen like a rock.

“This is really a high-performing mask,” he says on this mid-February afternoon, wearing a red-and-black checked shirt that’s like many he wears on his YouTube channel.

Before the big drop, the bumpy line on the computer screen illustrated the high concentration of sodium chloride particles, which were pumped throughout the bathroom by the aerosol generator near the sink.

As they should with good masks, readings from the machine by the window—called a particle counter—plunged once Collins fit the mask tightly to his boyish face.

Next, Collins enters the results into a spreadsheet that he freely shares online—a gold star issued by the self-described “mask nerd.”

“I just want better masks on more faces,” he says. “If you know the secret—if you know a piece of information that could help people—it’s your moral obligation to make sure that people are aware of that.”

Before the pandemic, Aaron Collins wasn’t nerdy about masks. He was simply a mechanical engineer with a background in aerosol science.

Beyond spending time with his wife and their now 6-year-old, Collins enjoyed cycling and using a trove of second-hand scientific equipment in his basement for pastimes such as measuring air quality inside his home.

But as COVID-19 spread, Collins wanted to know which masks provide the best protection against infection. He started testing different models in the summer of 2020 and shared his results through more than 40 videos on YouTube.

On Twitter, his @masknerd account has more than 48,000 followers. The mask nerd’s work has been featured everywhere from the Wall Street Journal and National Public Radio’s Marketplace to CBS Mornings with Gayle King.

Many videos feature lengthy live-streams as he’s actively testing masks from inside his bathroom—one recent video spans more than three hours. Others are shorter and provide summary or thematic reviews. A video surveying mask options for kids has been viewed more than 250,000 times.

His goofy authenticity is endearing.

In early 2021, videos made by Collins started catching the attention of researchers at the University of Minnesota. Now, when Neil Carlson, an industrial hygienist at the U, offers guidance on how to find good masks, videos from the mask nerd are among the resources he highlights.

He credits Collins, in particular, with helping people learn about higher-performing masks popular in South Korea, which Carlson believes are a good option for people in the U.S.

“I very much appreciate what Aaron has done,” Carlson said. “One man’s mission to inform people about masks and respirators has helped many people navigate this pandemic.”

A classroom connection, too

Last year, Collins worked with parents to place air purifiers in classrooms at his son’s elementary school. He was instrumental in getting buy-in from school officials by describing the idea in non-confrontational ways, said Katie Shepherd, one of the parents who worked on the project.

Shepherd, who is immuno-compromised, described Collins’ friendly style while offering her tailored advice on masks .

In the fall, Collins hosted an online session for parents struggling with the pandemic challenge of finding masks that work well for children. He brought mask samples to his son’s school that kids will more likely wear, said Angela Peña, a second-grade teacher.

“His wit and silliness can make his message so appealing,” Peñasaid. “People want to listen and learn.”

In his day job, Collins doesn’t work on masks. He’s a senior staff process engineer, with a focus on nano- and micro-assembly, at a company that makes computer hard drives. Collins also has plenty of industry experience working in aerosol science.

That background, plus his graduate work at the U, gives Collins know-how for the task of testing masks. Long before the pandemic, he routinely shopped websites like eBay looking for bargains on used scientific equipment.

“It was really kismet—I just literally had everything you needed in your basement to test masks,” Collins said. “I wasn’t sure if the KN95 mask that I was using was any good, and I was kind of bemoaning that, and my wife looked at me and said, ‘Why don’t you just test it?'”

Rather than take time writing up tests results, Collins opted to simply live-stream his experiments and post online a spreadsheet with all the data. It’s faster that way, he said, and helps with transparency, too, since people can see his methods.

Manufacturers supply many of the masks he tests. Collins stresses, however, that he receives no payments from the companies, or from third-party distributors. He salutes the skeptical response some might have when first encountering his work.

“If you saw some random dude on the internet who said, ‘Oh, yeah, I’m testing masks,’ you’d be like, ‘Yeah, right buddy,'” Collins said. “So, hey, don’t trust me. I’ll make the case about why my data’s good and present you the evidence—and you can make the decision about whether you want to believe me or not.”

Having conducted more than 500 tests on more than 200 different models of masks, Collins has become a go-to source for wisdom on personal protective equipment. Even so, he’s found the attention surprising.

When he reflects on the personal thrill of being interviewed by King of CBS Mornings, he jokes that he could have called out to her: “I’m a nerd! You shouldn’t be talking to me! I do stuff in my bathroom—why are you talking to me?”

The bathroom is his lab, by the way, because it’s the smallest room in the house. As such, it’s the easiest to fill with sodium chloride particles for the the filtration efficiency measurements he performs on masks.

“They’re salt particles,” he explains while setting up experiment No. 520. “You’d breath in more if you were sitting near the ocean.”

There are mask nerds in all walks of life and “they’re a force for good,” Collins said. His goal with the videos, initially, was simply to supply good testing data to his fellow enthusiasts.

That way, they could fan out, spreading the gospel of the mask nerds.