Home » Health News » The baby born without a NOSE

The baby born without a NOSE

The baby born without a NOSE: Iraqi child can only breathe through its mouth

An Iraqi baby has been born without a nose, meaning they can only suck in air through their mouth.

The unidentified child lives in Fallujah, around 40miles (64km) west of Baghdad – the capital of the war-torn nation.

No further details have been released about the baby, other than they have three siblings who are healthy. 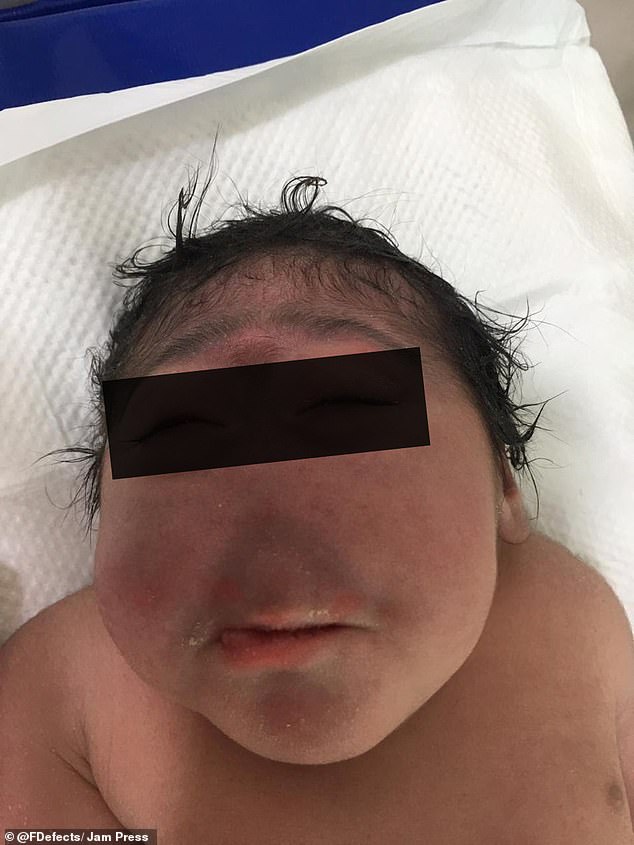 The unidentified child lives in Fallujah, around 40miles (64km) west of Baghdad – the capital of the war-torn nation

It is unclear why the baby has been born without a nose, though a rare condition called arhinia may be to blame.

The condition is believed to be caused by faulty genes. Fewer than 100 cases have ever been recorded.

Images of the newborn were published by Fallujah Birth Defects, which claims the rate of birth defects has spiked after the Iraq war.

The organisation, created nine years ago, claims it is the first time it has ever come across a baby without a nose. No external party has yet confirmed the picture is real. 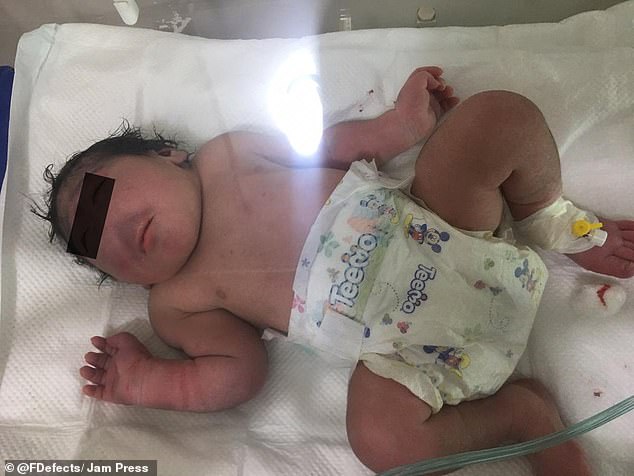 It is unclear why the baby has been born without a nose, though a rare condition called arhinia may be to blame

Arhinia is the absence of the nose and parts of the olfactory (the sense of smell) system.

One type is congenital arhinia (where the person is born with it), another is acquired arhinia (loss of the nose to cancer, infection, or accident).

It can be total (complete absence of the external nose and all/or parts of the olfactory (the sense of smell) system, the website Widesmiles reports.

Or, it can be partial (only parts of the external nose and olfactory system is missing).

Fewer than 100 cases have ever been recorded.

The baby was also born with microcephaly, a condition in which the brain does not develop properly and results in a smaller than normal head.

The infant’s family had reportedly refused a tracheotomy, which is where a tube is inserted into the windpipe.

They came from a rural area outside of Fallujah. The city itself was the scene for a bloody battle in 2004 between US forces and insurgents.

Fallujah was heavily bombed, leaving many of its buildings destroyed and much of its 300,000-strong population displaced.

FBD, which has nearly 5,000 Twitter followers, claims the two US invasions of Iraq are to blame for the birth defects.

The group’s social media imagery features a claim that around 15 per cent of all babies born in the city have birth defects.

Doctors in the ancient city have claimed to have delivered conjoined twins and babies born with extra fingers and toes or missing limbs.

The rate of defects, according to unconfirmed reports, is 14 times higher than that seen in Hiroshima in Japan.

FBD also alleges the two US wars in Iraq have left behind ‘hundreds of tonnes of depleted uranium munitions and other toxic wastes’.

A report by Dutch peace group Pax in 2014 found US forces fired depleted uranium weapons at civilian areas in Iraq.

Al Jazeera reported in 2012 that there are higher than usual levels of radioactivity in Fallujah and other cities in Iraq.

It sent a journalist to visit the city, who claimed he was told local doctors believe the birth defects are a ‘direct result’ of weapons used by US forces.

Though, no concrete evidence of a link between the two has even been found.