TEN MINUTES with a therapy dog can ease pain, anxiety and depression

Patients admitted to emergency departments saw their pain levels decline by up to 43 per cent after interacting with a spaniel named Murphy. Volunteers also reported an up to 48 per cent reduction in feelings of anxiety.

Depending on their mobility and condition, patients could pet Murphy or have him lie next to them as a source of comfort and companionship.

Publishing their findings in the journal Plos One, the Canadian researchers said they found no similar reductions in control group patients.

Previous research has shown even small interactions with dogs can cause the brain to produce oxytocin, a hormone often referred to as the ‘cuddle chemical’. 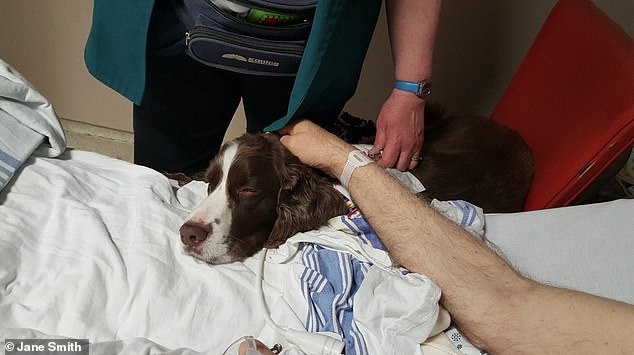 Professional good boy: Murphy the therapy dog visits a patient during the study

Many of the conditions and diseases that affect older dogs are the same as those that affect older humans — as well as fading hearing and eyesight, they can develop osteoarthritis, heart disease, dementia and kidney disease.

Dogs also get cancer at roughly the same rate as humans.

Now Dr Promislow, a professor of biology, medicine and pathology at the University of Washington School of Medicine in the U.S., has joined a team of scientists investigating these parallels in a unique study.

The Dog Aging Project aims to make the most of these shared diseases in the hope that it can lead to improvements not just in canine health but human health, too.

This isn’t about subjecting dogs to tests in labs.

This study involves monitoring pet dogs in their own homes to see how their environments, lifestyles and diets impact on how they age and their risk of age-related diseases.

Not only that but the scientists are also trialling a medicine which they believe will extend dogs’ lifespans by as much as a third — and again, they say the results could benefit humans.

While the therapeutic effects of specially trained animals in health settings have been established previously, prior experiments often failed to provide controls to measure the impact.

To measure this effect, researchers at the University of Saskatchewan set up a trial of almost 200 patients who were admitted to the emergency department of Royal University Hospital.

Patients were asked to rate their pain, depression, and anxiety out of 10 twice, with a 30-minute gap between ratings.

About half of the patients had a visit from a therapy dog called Murphy for 10 minutes in the middle of the ratings.

Dr Colleen Dell, an expert in health and wellness and lead author of the study, said the findings demonstrated the potential value in therapy dogs for emergency department patients.

Therapy dogs are occasionally used in the NHS to help patients whose condition means they need to stay in hospital for a long time, such as in paediatrics or palliative care settings.

Additionally, animal assisted interventions are used as part of actual treatment for mental health problems such as depression.

NHS trusts usually rely on local arrangements with charities or trained volunteers to get animals onto wards.

The authors cited previous research that found that petting animals released painkilling hormone oxytocin, and suppress the stress hormone cortisol as a reason why therapy dogs could have such an impact.

They also said another potential factor which could have impacted the results was the role of the therapy dog handler who, as part of the process, talks to the patients about their experience with dogs and how comfortable they were with animals.

Further research could examine the impact of this interaction on patients’ experience the authors said.

Other avenues for further work could look at different patient groups from other areas with the majority of the patients in the study Caucasians over the age of 50.