Awareness of prostate health is alarmingly low in men over 50, a new survey commissioned by the European Association of Urology (EAU) has revealed, despite the fact that at the age of 60 and over, 40 percent of men suffer from an enlarged prostate.

The survey, which assessed knowledge of the prostate in 3,010 men over 50 years in the UK, Germany and France, found that just one in 4 men (26%) over the age of 50 are correctly able to identify the prostate’s main function.

The study revealed a variety of misconceptions surrounding prostate health and, in particular, enlarged prostates (also known as benign prostate enlargement (BPE) or hyperplasia (BPH)) with just 38 percent of respondents able to correctly identify the disorder. A healthy prostate is about the size of a walnut and its main function is to produce prostatic fluid to carry the sperm. Whilst it does grow slowly as men grow older, only one in 6 (17%) respondents correctly stated that the symptoms relating to an enlarge prostate are not a “normal” sign of ageing.

Commenting on these findings, urologist Professor Hein Van Poppel, Adjunct Secretary General of the EAU, explains “The results are worrying, especially as the survey targeted men in the age group that are most likely to suffer from prostate-related conditions, such as prostate cancer and an enlarged prostate. The incidence of these conditions and their impact on medical practice is only going to become greater due to the ageing population, so we must ensure that men are well informed to enable quick consultation and treatment if required.”

The cause of an enlarged prostate is unknown, but it is believed to be linked to hormonal changes as men age. Common indicators of the condition include the sudden urge to urinate, a straining or painful sensation when urinating, feeling that the bladder is not completely empty, and getting up more than once at night to urinate. Nearly 50 percent of men (aged 50-60) don’t recognise these symptoms. The symptoms are often mild, but the severity can impair quality of life and research suggests that men with moderate or severe symptoms have an increased risk of serious heart conditions, such as stroke and cardiac death. 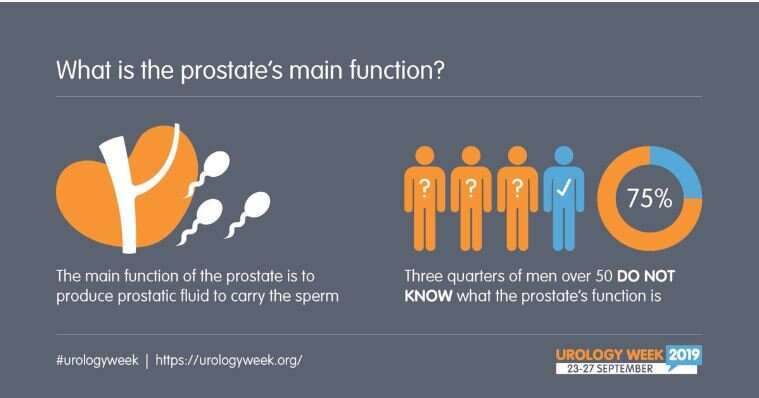 Enlarged prostate symptoms rarely discussed with partners or family members. When asked who they would speak to if they experienced any issues related to urinating, most respondents (61%) stated that they would visit their GP for further information. Interestingly, this question posed strong regional differences from France and the UK (67% and 66% respectively) and in Germany (50%). Just one-quarter of men (24%) specified that they would ‘Google’ their symptoms to find out further information, demonstrating that patients in this age bracket would prefer to speak directly to healthcare professionals.

Only 13 percent of men said they would discuss symptoms with their partner or family to receive more information. Professor Van Poppel comments, “Previous research showed that women actually know more about men’s health issues than men do. Therefore, we encourage men to discuss their urological symptoms and conditions with partners or families, as well as visiting specialised healthcare professionals such as urologists.”

There are multiple treatment options for an enlarged prostate, which include medical treatment, surgery through the urethra or lower abdomen, laser therapy, water vapour therapy, a change in diet or injections. Half of the survey respondents preferred having the option of different treatments, with38 percent favouring that their doctor recommended one treatment option (12% had no preference).

Younger respondents (aged 50-55) and those from Germany were more likely to favour shared decision-making between different treatment options from their doctor than older respondents (70+) and people from France or the UK.