Home » Health News » Should YOU be worried about a flu and Covid TWINDEMIC this winter?

Should YOU be worried about a flu and Covid TWINDEMIC this winter? Fears of possible two-in-one outbreak over the coming months

How concerned should we be about the potential threat to our health this winter, with the UK Health Security Agency (UKHSA) warning last week that we face the prospect of a ‘twindemic’ of flu and Covid-19 over the coming months?

Worse, thousands of people could be at risk of catching both infections simultaneously — a combination that ‘poses a serious risk’ to our health, the government agency warns.

The fear is that the twindemic would not only fill our hospitals, but having both infections at the same time can also increase the risk of either proving fatal.

Previous warnings of a possible two-in-one outbreak — known as ‘flurona’ — failed to materialise, but over the past two years Covid measures, such as reduced socialising and compulsory mask-wearing in indoor public spaces, kept the lid on flu infections, even if cases of Omicron (the milder but highly virulent Covid strain) surged. 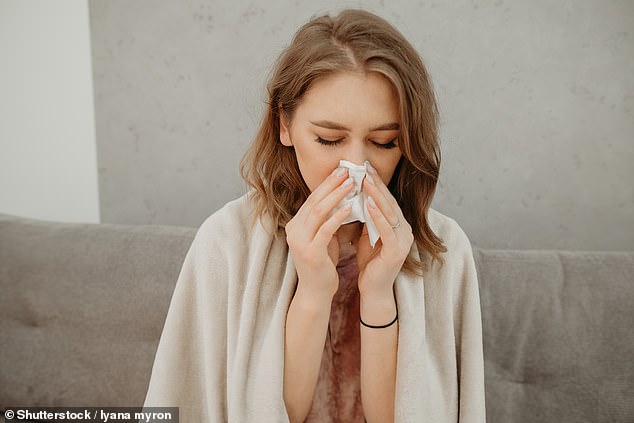 Worse, thousands of people could be at risk of catching both infections simultaneously — a combination that ‘poses a serious risk’ to our health, the government agency warns

Last winter, for example, hospitalisations for flu in England were just 15 per cent of what is seen in a normal year.

The UKHSA says reduced exposure to flu viruses in recent winters means fewer of us will have natural immunity to those circulating this year.

What’s more, the main flu virus in circulation this winter is H3N2, a strain with a reputation for putting more people in intensive care or, worse, proving fatal.

And it’s thought the virus will be able to take advantage of the freedom of movement that most of us now enjoy — just as a new wave of Covid also hits.

Professor Andrew Easton, a virologist at the University of Warwick, told Good Health that the ‘twindemic’ alert must be heeded, even though many of us feel that the misery of the pandemic is in the past.

Those most at risk — the elderly and those with chronic illnesses such as heart disease, asthma or diabetes, which leave them more vulnerable to complications from viral infections — should take particular care.

Professor Easton warns that although having had flu or a vaccine in the past can prime the immune system, the main flu virus in circulation constantly changes as a result of antigenic drift, where it swaps genes between strains to create variants that can dodge this immunity.

‘It takes about three years for the virus to acquire enough change for immunity to wane completely,’ he explains. ‘So if you missed a year — either because you weren’t infected or vaccinated — your chances of being more ill are significantly increased.’

This antigenic drift is why new flu vaccines have to be manufactured every year, tailored to suit the particular strain that’s doing the rounds. This is determined by which flu strains have been dominant in the winter in the Southern hemisphere.

This year’s flu cases in Australia, where H3N2 was the dominant strain, were above average and peaked much earlier than usual. 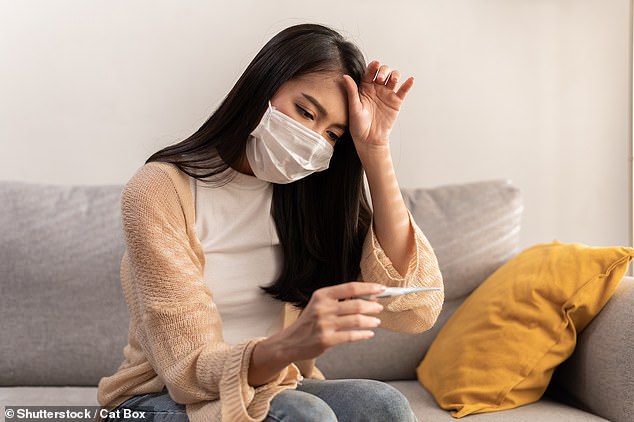 The fear is that the twindemic would not only fill our hospitals, but having both infections at the same time can also increase the risk of either proving fatal

‘H3N2 seems to lead to more severe disease, especially in the most vulnerable,’ says Professor Easton. ‘It’s probably due to a complex interaction between different viral genes that may suppress elements of the immune system reaction.’

This year’s World Health Organisation-approved vaccine is designed to protect against H3N2, but it is only 60 per cent effective due to mutations that occur in the virus between the point where the WHO agrees the strains to be included and the flu season arriving here.

Meanwhile, there are signs that a new wave of Covid infections is already under way, with hospital admissions in England rising to more than 7,000 in the seven days up to September 28 — 37 per cent higher than the previous week.

‘All the modelling suggests there will be a winter surge of Covid and flu, but no one knows how big it will be,’ says Professor Peter Openshaw, an immunologist at Imperial College London.

The main concern is that people might get both at once.

A 2021 UK study of 20,000 otherwise healthy people, published in the International Journal of Epidemiology, found that those struck by Covid and flu at the same time were nearly twice as likely to die as those who caught Covid alone.

The researchers warned: ‘Coinfection could have a significant impact on morbidity, mortality and demand for NHS services.’

‘If you have a respiratory infection and get another one on top of it, that’s likely to be much more damaging — especially in the very vulnerable groups,’ he says.

A double infection can overwhelm the respiratory system and increase the chance of life-threatening complications such as pneumonia.

‘You won’t necessarily be twice as ill, but it will still be serious and you would probably feel pretty bad,’ says Professor Easton.

Separately, leading UK virology experts fear this potential double-whammy could be a major problem for the NHS.

‘I am concerned about a possible “twindemic”,’ says Dr Simon Clarke, an associate professor in cellular microbiology at the University of Reading. He fears that ‘the NHS could be in for a fairly torrid time this winter’.

Apart from testing with lateral flow tests for Covid, it can be difficult to tell if someone has both infections. Unlike early Covid variants (where the main symptoms were cough, fever and loss of smell or taste), Omicron symptoms are more flu-like — runny nose, headache, sneezing, sore throat and fatigue.

‘The symptoms can be quite similar and, unfortunately, if you get both at the same time, you have a higher chance of ending up in intensive care or dying,’ says Professor Openshaw.

‘That is why vaccines are essential — and, remember, it takes up to three weeks for flu and Covid vaccines to be fully effective, so don’t delay.’

As well as vaccines, some of Britain’s leading infectious disease experts are already taking steps to protect themselves.

‘I am sticking with masks in crowded places,’ says Professor Openshaw. ‘I was at a conference recently where there were lots of new data showing they work [in reducing transmission]. But they must be high-grade masks — i.e. N95 masks [the ones that look like ‘beaks’] — and tight-fitting.’

Professor Easton says he and his family still wear masks in public places such as supermarkets.

‘The evidence shows that wearing masks reduces the spread of infections — and they work just as well for flu as for Covid,’ he says.

And Daniel Altmann, a professor of immunology at Imperial College London, will continue to wear masks on public transport and also carry out frequent lateral flow tests for Covid.

He warns: ‘There has been a rather unhelpful narrative that the pandemic has been beaten.

‘Yet Covid cases are rising, with the new BA.5 strain breaking through and in other parts of the world, such as the U.S., even worse variants taking over. So I will continue to take precautions.’

With warnings that we’re now facing a ‘twindemic’ of Covid and influenza, ‘it’s vital that those most susceptible to serious illness from these viruses come forward for vaccines in order to protect themselves and those around them’, says Steve Russell, NHS director for vaccinations and screening.

Around 33 million people in England (adults over the age of 50 and those who are in ‘at risk’ groups) will be eligible for a free flu jab this autumn; 26 million are eligible for a further Covid booster (the over 50s, frontline care workers, care home residents and patients who are clinically vulnerable).

While the jabs for flu and Covid are separate, many people may be offered both at the same time — but does it make sense to do this if your local health centre offers it? Or is it more prudent to have them separately, to avoid a double dose of side-effects?

‘From an immunological point of view, it’s equally safe and effective whether you have both jabs together or separately,’ says Ian Jones, a professor of virology at Reading University. This was confirmed by a study of nearly 700 people which was published in the Lancet.

‘There’s no evidence that having both vaccines at the same time decreases the benefit of either,’ says Daniela Ferreira, a professor of vaccinology at the University of Oxford.

In the study, roughly half the volunteers, who included pregnant women and those with compromised immune systems, had the flu vaccine and the Covid booster at the same time — and the reactions in the double-jabbed group were largely mild or moderate. A small proportion experienced a more severe reaction: 5 per cent in the double-jabbed group compared with 3 per cent in the other groups.

Professor Jones believes that people should have both vaccinations at the same time, if offered, as ‘it’s less work for both vaccine-givers and members of the public’.

Having both jabs at the same time may also mean that discomfort or side-effects are limited to one occasion and one arm (ideally the arm least used), he adds.

But Professor Ferreira suggests that if you’ve previously suffered side-effects, such as soreness, and are having both at the same time, it is worth having one in each arm. Pharmacist Sultan Dajani, who is now administering 600 Covid vaccinations and 200 flu jabs a week near Southampton, goes further.

‘Older people and those with compromised immune systems — such as cancer patients — may be more prone to side-effects, such as tiredness for a day or two if they have both jabs at the same time,’ he told Good Health.

‘Although it’s not possible to say you would get double the side-effects with two vaccines at the same time, it will increase your potential for side-effects.’

There are no official guidelines on how long to leave between jabs, but Sultan Dajani believes it’s ‘prudent’ to allow at least a week between the two vaccines.