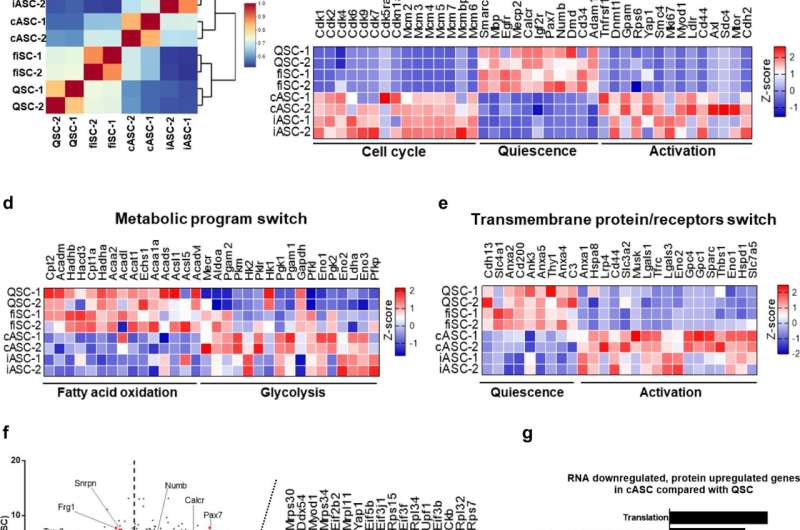 Researchers at the Hong Kong University of Science and Technology (HKUST) have discovered the constructive role of a protein in driving the skeletal muscle stem cell activation to repair muscle following damage, laying the foundation for further study in the mechanisms of stem cell quiescence-to-activation transition and stem cell-based muscle regeneration.

Despite being a critical step in muscle regeneration, the muscle stem cell quiescence-to-activation transition remains an elusive process, and scientists’ understanding of its mechanism and the true quiescent SC proteomics signature—the information about the entire set of proteins—has been limited.

Recently, using a whole mouse perfusion technique developed in its own laboratory to obtain the true quiescent SCs for low-input mass spectrometry analysis, a team of scientists at HKUST revealed that a regulating protein called CPEB1 is instrumental in reprogramming the translational landscape in SCs, hence driving the cells into activation and proliferation.

“In our study, we found discordance between the SC proteome and transcriptome during its activation, revealing the presence of a post-transcriptional regulation,” said Prof. Tom Cheung, lead researcher of the team and S H Ho Associate Professor of Life Science at HKUST. “Our analysis shows that levels of CPEB1 protein are low in quiescent SCs, but upregulated in activated SCs, with loss of CPEB1 delaying SC activation.”

In their subsequent RNA immunoprecipitation sequencing analysis and CPEB1-knockdown proteomic analysis, the researchers found that CPEB1 phosphorylation regulates the expression of the crucial myogenic factor MyoD—a protein involving in skeletal muscle development—by targeting some of the sequences found within the three prime untranslated region (3’UTR) of the target RNA transcript to drive SC activation.

Their findings were recently published online in the journal Nature Communications on February 17, 2022.

“It means that the manipulation of CPEB1 levels or phosphorylation can increase SC proliferation to generate enough myogenic progenitor cells for muscle repair, which could be a potential therapeutic target for muscle repair in the elderly,” noted Prof. Cheung, adding that the findings will play a fundamental role in the field as scientists continue to probe more comprehensively the mechanisms of stem cell quiescence exit and stem cell-based tissue repair.