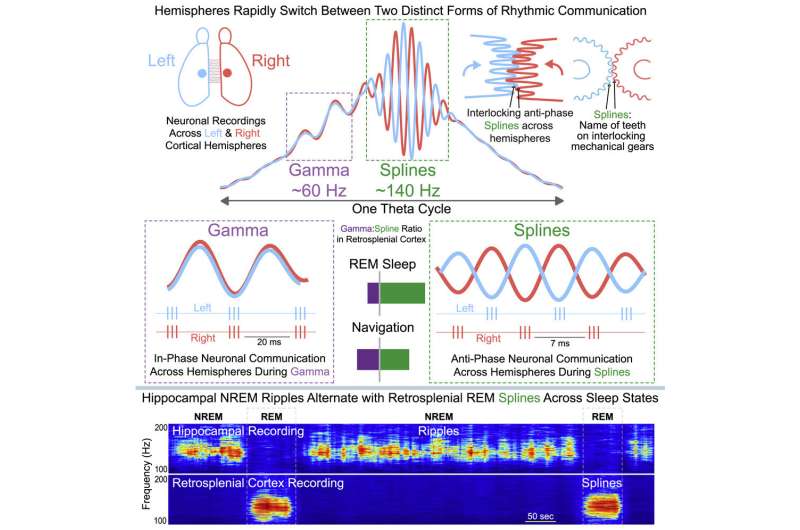 You’re out jogging and suddenly notice a low-hanging tree branch in your path. You quickly lower your head, narrowly avoiding the branch, and continue on the run without giving it another thought. But how did your brain help you so rapidly and precisely duck out of the way of the branch while running?

Researchers at the University of Michigan have now discovered a very fast brain rhythm that helps your left brain and right brain communicate better as you run faster—and even when you dream.

The fast rhythm linking the left and right halves of the brain has a new name: “splines,” so-called because they visually resemble mechanical splines, the interlocking teeth on mechanical gears.

Omar Ahmed, assistant professor of psychology and lead author of a new study appearing in Cell Reports, says that splines represent a pattern of rhythmic communication across the left and right brain that is different from other known brain rhythms.

“These spline brain rhythms are faster than all other healthy, awake brain rhythms,” she said. “Splines also get stronger and even more precise when running faster. This is likely to help the left brain and right brain compute more cohesively and rapidly when an animal is moving faster and needs to make faster decisions.”

“Surprisingly, this back-and-forth communication is even stronger during dream-like sleep than it is when animals are awake and running,” he said. “This means that splines play a critical role in coordinating information during sleep, perhaps helping to solidify awake experiences into enhanced long-term memories during this dream-like state.”

The new findings focus on a part of the brain called the retrosplenial cortex. This region helps us figure out when to turn left vs. right, and is also important for memory and imagining the future. Importantly, it is also one of the first brain regions to become impaired in the early stages of Alzheimer’s disease.