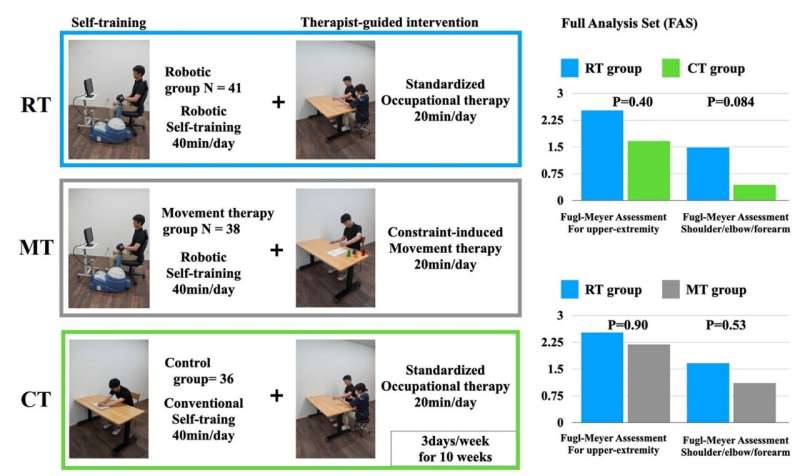 One of the most common effects of strokes are hemiplegia, a partial paralysis occurring in the left or right side of the body. When it occurs in the arm or hand, it is especially devastating to a patient’s ability to perform everyday tasks. Current treatments focus on improving motor function with therapist-led stretching and exercises to strengthen muscles and improve joint mobility. Recovery is a difficult process; functionality is rarely fully restored as the benefits of rehabilitation are believed to diminish over time, leading to lingering symptoms in chronic stroke patients who remain affected 180 days post-stroke. Chronic stroke patients often struggle as medical systems typically do not have programs for continuing treatment.

This led the Osaka Metropolitan University to determine if robotic therapy is as effective as traditional therapy during the chronic stage of stroke recovery. If widely adopted, robot therapy could improve care for stroke patients while being cost effective and requiring minimal therapeutic staff guidance.

The research team enlisted the help of 129 stroke patients who met screening criteria for arm and hand paralysis and provided informed consent to participate in the study. The team then coordinated efforts across 25 clinics and hospitals in Japan to test the efficacy of robot therapy. They performed a randomized controlled trial that divided patients with equally severe stroke into three groups with three one-hour weekly therapy sessions for 10 weeks, beginning six months after the patient’s stroke (Fig.1).

Contrary to widely accepted clinical practices, the chronic paralysis patients did show signs of improvement from the training despite being in the chronic stroke stage. Importantly, in measurements of daily tasks, the patients who received robot therapy rated the same as the control group who had therapist-led exercises.

The combined approach of robot therapy supplemented with therapist-led standardized occupational training proved most effective. This suggests not only that care for chronic stroke hemiplegia patients needs to be continued, but that robot therapy may be more influential in stroke recovery than traditional therapy alone.

The biggest differences were found in a subset of robot-therapy patients that had large improvements in shoulder, elbow, and forearm use, where the ReoGo-J upper-limb rehabilitation device program focused.