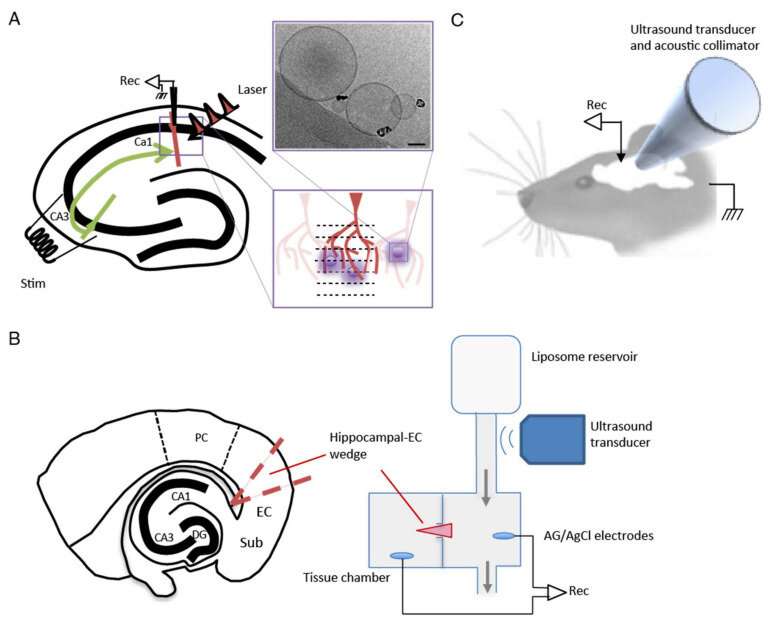 A research collaboration involving the University of Otago could change the lives of people living with seizures.

Researchers from Otago and Okinawa Institute of Science and Technology Graduate University have developed a new system that uses specialized sound waves (above the frequency that we can hear) or light (above the wavelength that we can see) to release medication into specific areas of the brain to stop seizure activity.

Otago lead researcher Professor John Reynolds says this novel new way of delivering drugs could be an effective solution, and a life-changer for some patients with epilepsy.

“The sound waves can be applied from outside the head to target an area where epileptic seizures can start, and will release the drug from tiny biological packages circulating in the blood stream as they pass through the area, to suppress the seizure activity,” he says.

A device would be connected to the head of the patient, and drug-containing liposomes—a drug delivery vehicle—will be injected into the blood stream. These liposomes will float around, but not change the brain unless activated.

“The device could then be triggered by the person when they sense an aura that a seizure is coming on, or automatically by a system that detects seizure brain waves, activating the liposome to release the drug to stop the seizure from developing,” Professor Reynolds says.

Laboratory testing focused on epileptic seizures in particular because of the challenges of long-term treatment with current anti-epileptic drugs and the large number of patients with drug-resistant epilepsy.

Ideally, treatment for epilepsy should prevent seizures before they occur. However existing treatments are not effective for prevention in about one third of patients and these patients are at significant risk of morbidity and mortality, he says.

“What is needed, therefore, is a means to deliver the drug immediately on the first sign of a seizure and our studies showed this system does just that—release of the drugs is rapid, immediate and effective.

“Our system could present the possibility of further reducing seizure frequency and allowing the person to take fewer drugs to reduce their seizures, improving their quality of life.”