Number of children and young people who are vaping DOUBLES in four years, official figures reveal

The number of children and young people vaping has more than doubled in four years, according to a report.

Overall use of e-cigarettes among young people remains low, but the habit is on the rise, figures show.

Children as young as 11 have been drawn in by the habit, as awareness of e-cigarettes, experimentation and use among older youngsters have all increased.

The gadgets, which help 22,000 people quit smoking each year, have divided health experts over their safety.

There are fears young people are drawn to the habit because it is ‘cool’ or the flavours taste nice, perhaps being unaware the products contain nicotine.

Experts have said there is a risk the popularity of vaping will reverse the progress made in slashing the number of cigarette smokers. 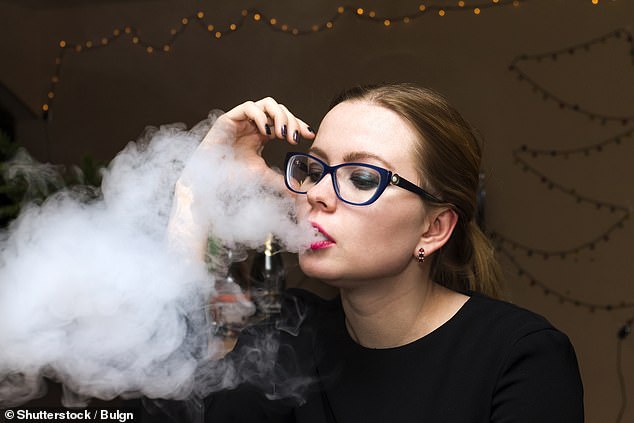 Overall use of e-cigarettes among young people remains low, but the number of children and young people who are vaping has more than doubled in four years (stock)

The report, commissioned by Public Health England (PHE), looked at surveys on e-cigarette use among young people.

The most recent was the Action on Smoking and Health YouGov survey of more than 2,000 children aged 11-to-18 last year.

The researchers – from Kings College London – said: ‘Experimentation and use of e-cigarettes has been increasing steadily over time.’

Smokers are far more likely to try vaping than non-smokers, suggesting there is a link between the two, they added.

The number of people trying vaping before trying a cigarette rose from 8 per cent in 2014 to 21 per cent in 2018, fueling concern youngsters are becoming addicted to nicotine through e-cigarettes.

Popular heated tobacco devices may cause the same damage to lung cells as traditional cigarettes, researchers from the University of Technology Sydney said.

Meanwhile, e-cigarettes – or vaping, as it’s commonly known – are also toxic to the cells which protect the lungs, so may not be a safe alternative either.

Both electronic devices are now thought to cause the airway damage seen in people with the lung diseases emphysema, bronchitis and cancer.

Australian researchers did lab tests on the effects of the devices and cigarettes on epithelial cells and smooth muscle cells taken from the human airways.

In healthy lungs, epithelial cells act as the first line of defence to any foreign particles entering the airway while smooth muscle cells maintain its structure.

The study found the devices harm the lung cells which protect the airways, in a similar way to cigarette smoke, causing scarring and reshaping of the airway seen in lung patients.

The study found the electronic devices caused this damage, including changes to cell structure and function, as well as a ‘cry for help’ inflammatory response.

That inflammatory response was as strong for the heated tobacco device as when the lung cells were exposed to smoke from Marlboro Red cigarettes.

Curiosity led almost two-thirds of young people who had vaped (57.2 per cent), while 16.1 per cent said they liked the flavours.

Professor John Newton, health improvement director at PHE, said the UK was ‘not seeing a surge in e-cigarette use among young people in Britain’.

E-cigarettes remain at the heart of PHE’s stop-smoking strategy, with TV adverts, health campaigns and researchers championing the technology.

Professor Newton said: ‘While more young people are experimenting with e-cigarettes, the crucial point is that regular use remains low and is very low indeed among those who have never smoked.

‘We will keep a close watch on young people’s vaping and smoking habits to ensure we stay on track to achieve our ambition of a smoke-free generation.’

Professor Martin McKee, of the London School of Hygiene and Tropical Medicine, claimed there was a growing international consensus that the devices should be regarded with caution rather than promoted by public health officials.

‘We have seen what is happening in the USA, with an explosive growth in e-cigarette use among young people,’ he said.

‘So for PHE to be pushing them out to the general public and making them as easily available as possible does not seem like a good idea.

‘It is further evidence that England is out of line with the rest of the world.’

The vaping industry has been urged by health regulators in the US to address the problem of surging teenage e-cigarette use or risk having their flavoured products – such as bubblegum, cola and fruit flavours – pulled off the market.

Young people may see vaping as a ‘safe’ option as they were developed to help smokers quit and, although they contain nicotine, are reportedly free of the other toxins that harm smokers’ lungs.

But critics have said the long-term effects are not clear, and health bodies, such as NICE, claim the evidence is so far too weak to recommend them over counselling or nicotine patches.

Vaping among adults in Britain has remained stable since 2015, with up to 6.2 per cent of adults estimated to do so, according to PHE.

The report said while England ‘continues to take small progressive steps towards ensuring vaping remains an accessible and appealing alternative to smoking’, more can be done.

What is an e-cigarette and how is it different to smoking tobacco?

An electronic cigarette (e-cigarette) is a device that allows users to inhale nicotine by heating a vapour from a solution that contain nicotine, propylene and flavourings.

But while they have been branded as carrying a lower risk than cigarettes, an increasing swell of studies is showing health dangers.

E-cigarettes do not produce tar or carbon monoxide, but the vapor does contain some harmful chemicals.

Nicotine is the highly addictive chemical which makes it difficult for smokers to quit.

Very similar to normal e-cigarettes but with sleeker design and a higher concentration of nicotine.

Thanks to its ‘nicotine salts’, manufacturers claim one pod delivers the amount of nicotine as a pack of cigarettes.

It is composed of an e-cigarette (battery and temperature control), and a pod of e-liquid which is inserted at the end.

It is known as a ‘heat not burn’ smokeless device, heating tobacco but not burning it (at 350C compared to 600C as normal cigarettes do).

The company claims this method lowers users’ exposure to carcinogen from burning tobacco.