NHS made to pay £250,000 in fines since 2015 for making junior doctors work beyond their contracted hours

The NHS has had to pay £250,000 in fines for making junior doctors work overtime, an investigation has revealed.

Junior doctors have worked beyond their contracted terms and conditions more than 63,000 times, an average of 2.1 times per doctor, since 2015.

The figures come from the first analysis since the introduction of a controversial contract in 2016, which led to the first strike action by junior doctors in 40 years.

The true figure is likely to be higher, as some junior doctors revealed they were discouraged from reporting by senior staff over fears they would look inefficient.

Health officials have said they aren’t worried about the high number of reports because it suggests ‘a culture of wanting to make things better’. 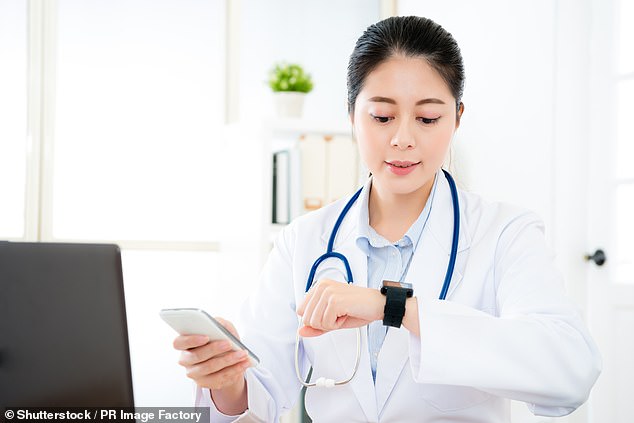 Junior doctors have worked beyond their contracts more than 63,000, an average of 2.1 times per doctor, since 2015, an investigation by the Health Service Journal showed

The data was obtained by the Health Service Journal through a Freedom of Information Act request from more than 200 NHS trusts.

Exception reporting, which is still relatively new, is part of the junior doctors’ contract.

It allows a trainee to file a report when they work overtime, without breaks or when another part of their contract is breached.

Doctors who work overtime should be given time in lieu, more pay or have their hours reviewed.

A guardian of safe working can also levy fines against a trust, with the money to be spent on doctors’ educational needs.

The findings are the first to highlight in numbers how much pressure junior doctors are under while being expected to work above and beyond.

WHAT TRUSTS REPORTED THE MOST OVERTIME?

The following trusts were found to have the most exception reports:

WHAT TRUSTS REPORTED THE MOST OVERTIME PER DOC?

The second highest was 1,935 from over 590 junior doctors working at Sheffield Teaching Hospitals Foundation Trust, the figures show.

However, the data did not consistently show a correlation between trusts employing a high number of junior doctors and the number of exception reports.

Croydon Health Services Trust reported 1,748 exception reports from 205 doctors, meaning there were 8.5 reports per doctor, accumulating the highest number of fines levied against a trust at over £25,000.

Whereas Barts Health Trust had less than one report per doctor, with 526 reports among 1,000 junior doctors employed.

A spokesperson at Croydon Health Services Trust said it had worked to create an environment that encourages exception reporting.

In other hospitals, this is far from the case – doctors are worried they will appear to be inefficient, or doctors were told to log overtime as bank shifts.

Therefore a lower number is not suggestive of better working conditions, the investigator believe.

One trainee at Queen’s Hospital in Romford said: ‘I have experienced a culture where exception reporting is strongly discouraged.

‘When one of the registrars found out I had exception reported he said it was entirely the result of poor time management.’

It is possible that technical barriers and human error have prevented reports going through, as well senior staff stuck to old monitoring systems.

The most common reason to report an exception report was for overtime, which happened 31,000 times between August 2016 and July 2018.

Ashford and St Peter’s Hospitals Foundation Trust spent £514 on lunches described as ‘forum of trainee safe working meetings’, at the request of doctors.

On the back of the findings, Jeeves Wijesuriya, chair of the British Medical Association’s junior doctors committee, said he was not worried about trusts with high numbers of reports, because it suggested ‘a culture of wanting to make things better’.

He said: ‘The places I worry about are where there are no exception reports. That’s a real red flag.’

Simon Fleming, orthopaedic registrar and past president of the British Orthopaedic Trainees Association, said there was a ‘significant amount of Stockholm syndrome’ among trainees.

‘We have learnt to love this unhealthy culture we work in. A lot of junior doctors don’t appreciate how powerful exception reporting is,’ he said.

But the figures show differently – stressed junior doctors are cutting their career short more than ever.

Most junior doctors don’t carry on with training after their two-year foundation programme. In 2017, only 43 per cent stayed with the NHS, an annual report from the BMA in May found.

This is the lowest proportion in the health service’s history and down from 71.3 per cent in 2011.

Calls to PHP, which supports stressed and depressed doctors, have doubled in recent times, with young medics making up most of the cases, Dr Clare Gerada, former chair of the Royal College of GPs revealed in October.

Doctors often hide conditions such as depression and alcoholism because they are concerned it may affect their careers, Dr Gerada claimed.

It’s not only millennials feeling the strains of the workload – experts are increasingly warning of the burn-out doctors are experiencing under mounting pressures, with as many as one in five  planning an early retirement as a way out, according to the General Medical Council.