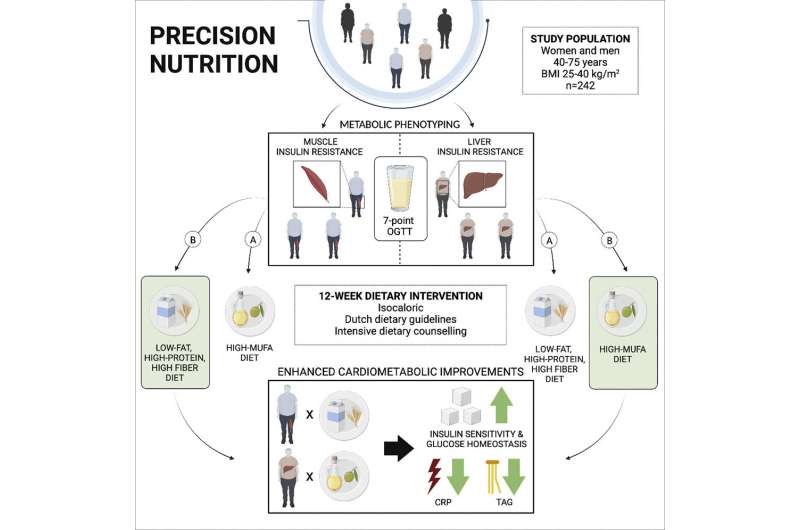 For the first time, there is scientific evidence that a personalized diet based on a person’s metabolic profile leads to better health. This conclusion follows years of research in a large-scale public-private partnership within TiFN, Maastricht UMC+ (MUMC+) and Wageningen University & Research (WUR), where they joined forces with various knowledge institutes and companies in the food industry under the leadership of Professor of Human Biology Ellen Blaak (MUMC+). At Wageningen University & Research, Lydia Afman, associate professor at Human Nutrition and Health, was responsible for the study. The results were recently published in Cell Metabolism.

Afman is pleased with the results. “Food scientists have suspected for some time that the most optimal diet can differ from person to person. Never before has a study been done with this approach, size and to such an invasive degree. The research shows that variants within the general, healthy dietary advice lead to further improvements in the metabolism and that the optimal nutritional advice depends on a person’s metabolic type,” she explains.

The researchers from both WUR and Maastricht designed a study in which 242 research participants followed a three-month nutrition program. The program was adapted to their metabolic profiles and the recommended diet complied with the “Guidelines for a Good Diet” of the Health Council.

Before and after, the researchers measured participants’ glucose and fat metabolism, and sensitivity to the hormone insulin. Insulin plays an important role in the regulation of sugar metabolism. These are important indicators of the risk of diabetes and cardiovascular disease. The study did not focus on weight loss.

The study participants were divided into two groups based on their metabolic profiles. The classification was based on how well insulin worked in the liver and muscles. With a reduced effect of insulin, the cells in the body are less able or not able to control the sugar level of the blood, which can ultimately lead to type 2 diabetes and cardiovascular disease. The participants were overweight (BMI above 25 kg/m2) and had metabolic disturbances, but no diabetes or cardiovascular disease at the time.

They received a personalized nutrition program based on a lottery. People who were less sensitive to the effect of insulin in the muscles appeared to benefit more from a diet that was relatively high in protein (for example, a lot of dairy products and nuts) and dietary fiber (for example, wholemeal products and vegetables) and low in fat. The participants with a reduced effect of insulin in the liver benefited more from a diet high in monounsaturated fatty acids (for example, a lot of olive oil and nuts).

Afman notes, “In the future we will dive into the underlying mechanism of this. In addition, there may be even more metabolic profiles. We would also like to do more research on this.”