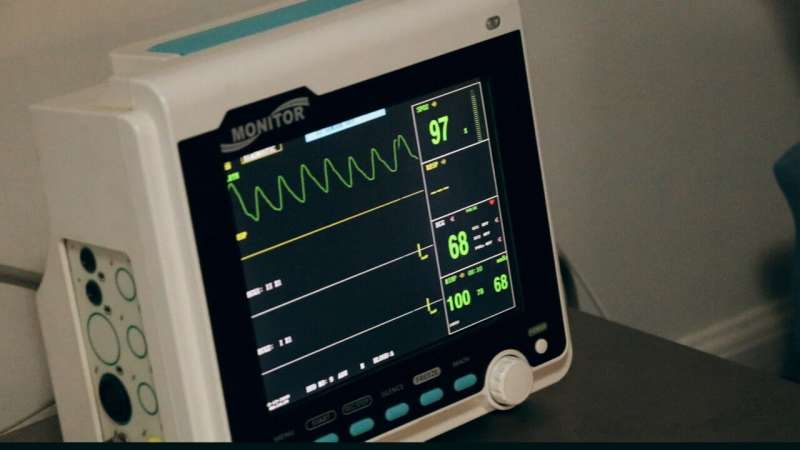 New research shows how doctors can improve the timing of surgery for some heart attack patients by analyzing the levels of a particular protein.

Troponin is a protein involved in muscle contraction that is released into the bloodstream after a heart attack. The higher the troponin levels, the more damaged the heart is. Clinicians use troponin levels, along with other tests, to determine whether a patient is having a heart attack and to decide on treatment options such as coronary artery bypass graft (CABG) surgery—a surgical procedure used to treat coronary heart disease.

In the large new study, researchers found that some patients who have lower levels of troponin would benefit from having earlier surgery. However, the researchers show that patients with very high troponin levels should have surgery postponed, as their risk of dying was higher if surgery was performed within 10 days of their heart attack.

There was no benefit in delaying surgery for those with low levels of troponin, according to the study, which is published in the International Journal of Cardiology. The work was carried out by researchers from the National Institute for Health and Care Research Health Informatics Collaborative (NIHR HIC) led by Imperial College Healthcare NHS Trust, Imperial College London and collaborators at University Hospitals Bristol NHS Foundation Trust.

The researchers suggest that early surgery for heart attack patients with lower troponin levels would reduce overall length of stay and ease pressure on resources such as staff.

This is the first multicenter study to investigate the interaction between the extent of heart damage, as indicated by troponin levels, and the optimal time to wait for surgery in a large series of heart attack patients.

Dr. Amit Kaura, lead author of the research, NIHR Clinical Research Fellow with the National Heart and Lung Institute at Imperial College London and Academic Cardiology Registrar at Imperial College Healthcare NHS Trust said, “The approach on the safest time to operate on patients following a heart attack varies in hospitals across the U.K. Our study could help clinicians make more informed decisions on the best treatment plans for heart attack patients requiring surgery, based on their levels of troponin. It could also lead to a more standardized approach in the NHS on how we treat this patient group, leading to resources being used effectively, shorter stays and improved outcomes for patients.”

The study reviewed patients who had a type of heart attack called a non-ST segment elevation myocardial infarction (NSTEMI) due to a blockage to their coronary arteries—which supply blood to the heart—who required a CABG. This is a procedure that uses veins, usually from the legs, or arteries from the chest or arm to bypass the blockage and restore blood flow and oxygen to heart muscle.

About 20% of NSTEMI patients have a CABG. However, the optimal timing for CABG surgery in patients with uncomplicated NSTEMI has been unclear. Prior to the new research, some studies had suggested that early surgery was associated with higher mortality post operation. This has led to a tendency for CABG to be delayed if a patient’s condition remains stable. However, other studies had reported similar mortality rates after early versus late surgery, concluding that delaying surgery in all patients after uncomplicated NSTEMI is not warranted and does not improve outcomes. No previous study had investigated in a large group of patients whether there was an association between the extent of heart damage (as measured by troponin levels) and the wait for surgery on survival.

The team analyzed data from the NIHR HIC of 1,746 patients with NSTEMI and unstable angina (UA)—a condition in which the heart doesn’t get enough blood and oxygen, leading to a heart attack. The cohort consisted of 1,684 patients with NSTEMI and 62 with UA. The average age of the group was 69 and 21% were female. They underwent CABG within 90 days at one of five cardiac centers before their surgery—Imperial College Healthcare NHS Trust, University College Hospital, Oxford University Hospital, Kings College Hospital and Guys and St Thomas’ Hospital—between 2010 and 2017.

The researchers compared patients’ troponin levels, wait between surgery and outcomes after surgery within the first 30 days and over a period of five years. They found that the pre-operative troponin level was a strong predictor of early mortality, and this was significantly influenced by the interval to surgery. The average wait for patients with high troponin levels to surgery was nine days. Sixty patients died within 30 days after surgery and another 211 patients died over a period of five years following surgery. They found that for those who had troponin levels of less than 100 times the normal upper limit, delaying surgery to after 10 days was not associated with lower survival. For patients with higher troponin levels, early survival increased progressively with a longer time to surgery—survival was highest in those who had surgery after day 10.

The effect of troponin levels pre-operation on survival was limited to the first 30 days after surgery. Late survival was determined by other risk factors, such as age and other co-morbidities such as hypertension.