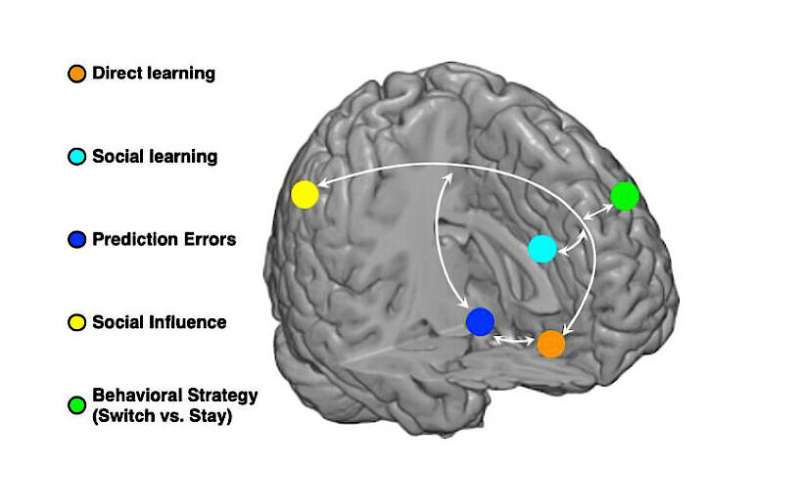 We make decisions based on not only our own learning experience, but also learning from others. But with the presence of other people’s choices, how do we learn from them to better inform our own learning? Is social learning processed differently from direct learning? In a new study, published in Science Advances, neuroscientist Lei Zhang of the University of Vienna provides empirical evidence that there are parallel computations for direct learning and social learning and they are carried out in distinct but interacting regions in the brain.

It is no secret that people underlie social influences. For example, at the lunch counter of a new company, when we are unsure which dish would taste good, we monitor other peoples’ choices to obtain some guidance for our own menu selection. This phenomenon, which is referred to as social influence, was demonstrated experimentally starting in the 1950s by social psychologist Solomon Asch.

In the new study, researchers from the University Medical Center Hamburg-Eppendorf (UKE) in Germany placed groups of five volunteers in the same computer-based decision-making experiment, where each of them was presented with two abstract symbols. Their objective was to find out which symbol would lead to more monetary rewards in the long run. In each round of the experiment, every person first made a choice between the two symbols, and then they observed which symbols the other four people had selected; next, every person could decide to stick with their initial choice or switch to the alternative symbol. Finally, a monetary outcome, either a win or a loss, was delivered to every one according to their second decision. “This way, we enable real-time interactions among the volunteers, which greatly enhances ecological validity,” says study leader Lei Zhang, then at the UKE and now a postdoctoral researcher at the University of Vienna. 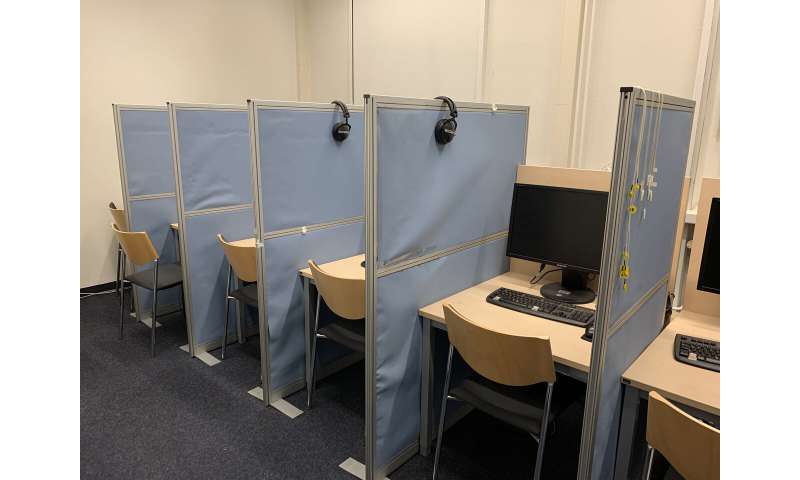 In fact, which symbol was related to more reward was always changing. At the beginning of the experiment, one of the two symbols returned monetary rewards in 70% of the time, and after a few rounds, it provided rewards in only 30% of the time. These changes took place multiple times throughout the experiment. “This so-called reversal learning paradigm will create uncertainty for volunteers so that they will always need to learn and relearn to gain more outcomes. In particular, when the reversal just happened, some people in the group may pick it faster than the others, and if so, the others could combine this social information into their own decision-making processes,” explains Jan Gläscher, who leads a research group on valuation and social decision-making at the UKE.

Within each group, the researchers scanned one of the volunteers’ brain using functional magnetic resonance imaging, which allowed them to measure when and where the brain carries out both direct learning and social learning, and to characterize whether the two types of learning actually are associated with different neural signatures. The brain scans showed that direct learning is represented in the area called the ventromedial prefrontal cortex, whereas social learning is represented in the area called the anterior cingulate cortex. These two areas also interact with an area in the middle of the brain called the striatum, “which computes both reward prediction error and social prediction error, quantifying trial-and-error learning to inform behavior” says Gläscher. “These indicate an integrated brain network supporting social influence in human decision-making.” 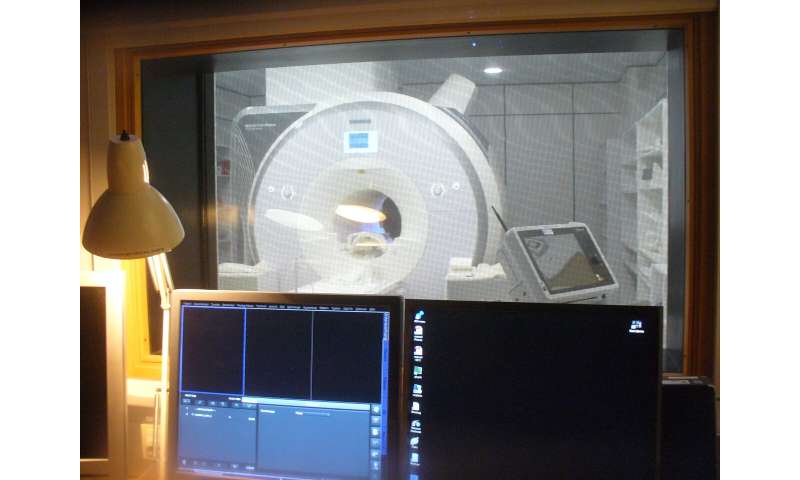 These findings suggest that two unique types of learning signals are computed in distinct but interacting regions in the human brain, and represent separate computational strategies for decision-making in social contexts. “Direct learning is efficient in stable situations,” explains Gläscher, “and when situations are changing and uncertain, social learning may play an important role together with direct learning to adapt to novel situations, such as deciding on the lunch menu at a new company.”