The average mother returns to their pre-pregnancy drinking habits by the time their child is of school age, an Australian study has found.

According to research led by the Murdoch Children’s Research Institute, women dramatically reduce their alcohol consumption on learning they are pregnant, although they tend to return to their old ways by the time their youngest child is five.

Men, on average, did not change their alcohol consumption on becoming fathers. 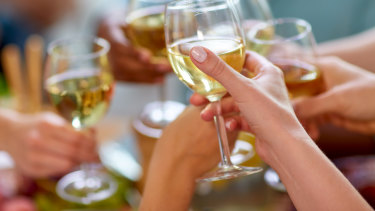 Women are returning to their pre-pregnancy drinking habits within five years.Credit:Shutterstock

Women drank at a reduced in the first 12 months of their child's life. After that, researchers observed a gradual increase in alcohol consumption over the next four years, until it generally returned to a pre-pregnancy level.

The study, which drew on data from 4,000 people aged between 21 and 35 from Australia and New Zealand across three longitudinal studies, also found 15 per cent of mothers with children aged five or over reported binge drinking in the past week.

Both men and women need to find different ways to put the brakes on their drinking at this time of life.

However, women were still more likely to binge drink if they were not mothers, with 25 per cent of women without children reporting the behaviour.

Men were not more or less likely to report binge drinking behaviour based on whether or not they were a parent.

Psychologist Dr Rohan Borschmann, lead author of the study, said the data showed Australians were not "maturing out" of alcohol consumption after having a family.

"The traditional combination of 'marriage, mortgage and kids' no longer has any impact on men's drinking – and it has only a temporary impact on women’s drinking," he said.

"This tells us that both men and women need to find different ways to put the brakes on their drinking at this time of life, and that is something that needs to be the focus of future research."

Dr Borschmann added that the trend could be explained by people having children later in life, after developing more established drinking habits, as well as a shift in expectations about how much having children will change a person's life.

"Many women today have an expectation of returning to their pre-pregnancy lifestyle after having children – which is a good thing in many ways, of course, such as returning to work – but one aspect of this appears to be a return to similar drinking patterns," he said, adding that it is possible men are also not reducing their alcohol consumption after becoming parents because they do not feel pressure to from their female partners.

It was 'possible' that alcohol is being used as a coping mechanism by mothers of young children.

"That one powerful influence that helped men to cut down their drinking is no longer active."

The authors of the study, which was published in the Drug and Alcohol Dependence Journal, wrote that, although their study did not analyse why women gradually increased their alcohol consumption over the first few years of their child's life, suggested it was "possible" that alcohol is being used as a coping mechanism by mothers of young children.

Dr Nicole Precet, founder of parenting support service the Centre of Perinatal Excellence (COPE) and former national perinatal advisor for beyondblue, said she was "not surprised" by the findings.

"Women want to do the right thing," she said. "There are a lot of public health campaigns about not drinking when you're pregnant, and often that will continue through to the first year; particularly if they are breastfeeding, they might be more wary of how much alcohol they're drinking."

A variety of factors can lead to women returning to their regular drinking patterns, from socialising more to dealing with the emotions that come with being a new parent.

"Often early motherhood is very isolating, and having a drink at the end of the day can help," Dr Precet said. He warned that parents should look at the Australian Alcohol Guidelines in assessing if they are drinking too much, and should consider whether alcohol consumption is compromising their alertness.

"It's a huge responsibility, having a child. You've got to be thinking about the safety of the child."