Most common type of surgery for shoulder pain ‘does not work’

Most common type of surgery for shoulder pain given to thousands of patients ‘does not work’, panel of international experts argue

Common surgery given to thousands of patients battling shoulder pain doesn’t work, according to mounting evidence.

Decompression surgery is used to manage the symptoms of the most common form of shoulder pain – subacromial pain syndrome (SAPS).

There are around 20,000 of the procedures performed in NHS hospitals every year, costing around £50million, figures show.

However, an international panel of 20 medical experts have now said decompression surgery provides no benefit after reviewing the evidence. 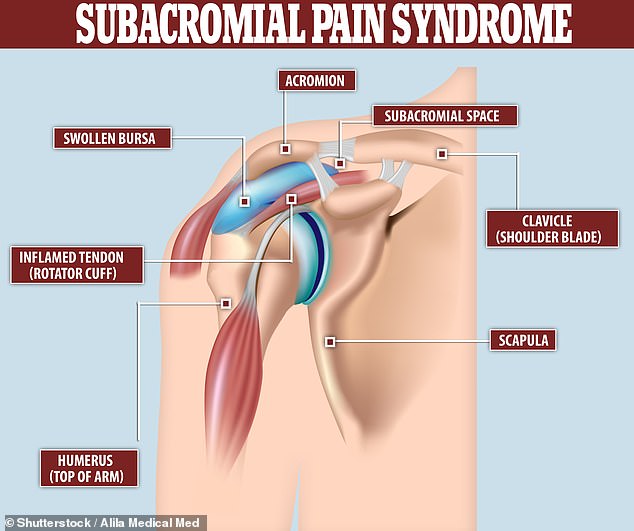 SAPS, when a tendon inside the shoulder rubs on nearby tissues as the arm is lifted, is a common cause of shoulder pain in people over the age of 40

Writing in the British Medical Journal, they said they strongly advised against the surgery and said it is no better than painkillers.

SAPS, when a tendon inside the shoulder rubs on nearby tissues as the arm is lifted, is a common cause of shoulder pain in people over the age of 40.

It is also known as subacromial pain syndrome or rotator cuff disease.

Patients are sometimes offered subacromial decompression surgery to relieve their symptoms when other treatments have not worked.

It involves widening the space around the rotator cuff tendon, making sure that it doesn’t rub or catch on anything nearby, such as bone, as you move the arm.

WHAT IS DECOMPRESSION SURGERY FOR SHOULDER PAIN?

An operation called a subacromial decompression may be an option for shoulder impingement if other treatments haven’t worked, although there’s some uncertainty about how much it helps.

This area, including the muscles and tendons, is often called the rotator cuff.

If you have shoulder impingement, the amount of space is reduced.

This may be due to an injury, overuse of the shoulder or wear and tear with age – sometimes arthritis.

Subacromial decompression can open up the space by removing any swollen or inflamed bursa, the fluid-filled sac found between the tendon and acromion, or bony spurs on the acromion which grow with age.

Subacromial decompression can take around an hour, depending on how complicated your operation is.

The operation is usually done as a keyhole procedure using a narrow, flexible, tube-like telescopic camera called an arthroscope, and small cuts around the shoulder.

Specially designed surgical instruments will be inserted through the small cuts and reshape the subacromial space and perhaps tendons.

Subacromial decompression is usually done under general anaesthesia, which means that you’ll be asleep during the procedure.

The panel of experts was made up of bone surgeons, physiotherapists, clinicians and patients with experience of shoulder pain and surgery.

They carried out a detailed analysis of the latest evidence. This was based on two systematic evidence reviews.

The first review analysed if the benefits or changes were to pain, function and quality of life were worthwhile for patients with SAPS.

The second measured the benefits and harms of the surgery compared to a placebo or non-operative management strategies, such as exercise.

Some evidence showed that surgery did not have meaningful benefit over placebo surgery after one year.

The analysis also found that compared with exercise therapy, there was no important benefit of surgery on pain, function or quality of life.

About a third of all participants included in the trials continued to have symptoms, such as mild to moderate pain, at one year, irrespective of treatment.

Surgery also has potential for serious harm and is expensive, said the team led by Dr Per Olav Vandvik from Lovisenberg Diaconal Hospital, Oslo.

The panel felt that almost no one who fully understands the evidence would choose to have surgery.

They recommended a change in practice, given the risk of harm and burden to patients and waste of health care resources.

‘Clinicians should not offer patients subacromial decompression surgery unprompted,’ they wrote in the journal.

‘And clinicians, public healthcare providers, and others should make efforts to educate the public regarding the ineffectiveness of surgery.’

There is substantial uncertainty around what would be better offered as an alternative.

Up to a quarter of adults have experienced shoulder pain over the past year, of which SAPS accounts for 70 per cent of cases.