More than a million Britons are at risk of a life-threatening asthma attack because they are not using their inhaler correctly, a charity has warned.

A survey of more than 10,000 patients by Asthma UK suggests nearly one in five (19 per cent) are failing to get their inhaler technique checked by their GP or asthma nurse.

National guidelines state everyone with asthma should have their inhaler technique looked at as part of their yearly review.

Failure to use an inhaler properly means the full dose of medicine cannot reach the lungs, with much of the drug staying in the mouth or throat. 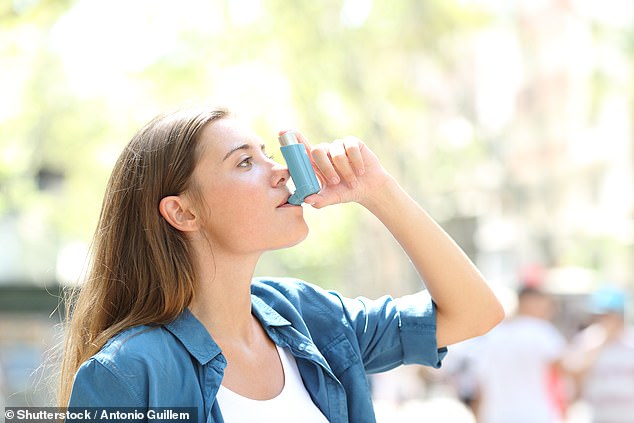 In the UK, 5.4million people are being treated for asthma, of which 4.3million are adults, Asthma UK statistics show.

Tragically, three people die from the condition every day in the UK, with two-thirds of these deaths being preventable.

And in the US, more than 26million people have asthma, according to the Asthma and Allergy Foundation of America.

Dr Andy Whittamore, clinical lead at Asthma UK and a practising GP, said: ‘Inhalers are the bread-and-butter treatment for most people with asthma.

‘So it’s really worrying many people are not taking them properly or getting their technique checked by their GP or asthma nurse.

‘With so many different types of inhaler which are all used in different ways, it can be difficult for patients and healthcare professionals to know the correct way to use them.

‘It’s also easy for patients to get into bad habits or simply forget the best technique following their appointment, especially if they have a new type of inhaler.

Asthma is a common but incurable condition which affects the small tubes inside the lungs.

It can cause them to become inflamed, or swollen, which restricts the airways and makes it harder to breathe.

The condition affects people of all ages and often starts in childhood. Symptoms may improve or even go away as children grow older, but can return in adulthood.

Symptoms include wheezing, breathlessness, a tight chest and coughing, and these may get worse during an asthma attack.

Treatment usually involves medication which is inhaled to calm down the lungs.

Triggers for the condition include allergies, dust, air pollution, exercise and infections such as cold or flu.

If you think you or your child has asthma you should visit a doctor, because it can develop into more serious complications like fatigue or lung infections.

‘But even a small tweak to how someone uses their inhaler can make a huge difference and could prevent them having a life-threatening asthma attack.’

Asthma UK asked 10,064 patients if their inhaler technique had been checked by a GP or asthma nurse in the past year.

Of which, 15 per cent said they had not had the check-up, while four per cent could not remember.

Based on these figures – and data that suggests 5.4million in the UK have asthma – 1,026,000 people have not had their inhaler technique checked, according to the charity.

Asthma UK is calling on doctors, asthma nurses and pharmacists to help patients avoid attacks by supporting them with their inhaler technique.

But with dozens of inhalers that need to be taken in different ways, it can be difficult for healthcare professionals to know how they all work.

A past study suggests nine in ten health workers do not know how to demonstrate correct inhaler use.

As well as putting patients at risk of an asthma attack, an incorrect technique may also cause the medication to linger in the mouth, leading to oral thrush or a sore throat.

To help patients and healthcare professionals alike, Asthma UK has put together nine videos, each lasting just a few minutes, that show the correct way to use different inhalers.

This comes after Asthma UK’s nurses, who provide support via a helpline, had more than 3,000 calls last year from people needing assistance with their inhaler.

The most common mistake asthmatics make include breathing too forcefully or not forcefully enough, not breathing in deeply enough, or not preparing their inhaler properly, such as by shaking it, the charity has warned.

If people are struggling to get their inhaler technique right, it may help if they use a spacer, Asthma UK added.

This is a hollow chamber that attaches to the inhaler and makes it easier for the medicine to get into the lungs, which helps to reduce the risk of side effects.

ASTHMATIC MAN, 44, HAS BEEN HOSPITALISED 48 TIMES AFTER SKIPPING HIS INHALER REVIEWS 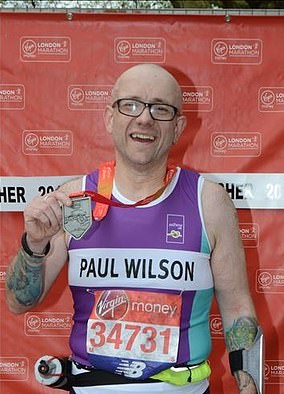 Paul Wilson (pictured) was hospitalised 48 times after missing out on his yearly inhaler reviews. After finally seeing an asthma nurse, he got his condition under control and is pictured after running the London Marathon for Asthma UK last year

A asthmatic man was hospitalised 48 times after skipping his yearly inhaler reviews.

Paul Wilson, 44, from Beith near Glasgow, even had to be resuscitated on 25 occasions when he missed out on the vital appointments.

‘I’ve been rushed to hospital countless times with my asthma, and been put on drips, nebulisers and even ended up in intensive care,’ he said.

‘But I’d never really given too much thought on how to manage my asthma or use my inhaler properly.

‘Looking back, I was just taking a puff and hoping for the best.’

Although Mr Wilson was optimistic this would do the trick, his health took a dramatic turn for the worse.

‘My symptoms were getting so severe it got to the point where I was having an asthma attack every week,’ he said.

‘I would wake up in the middle of the night gasping for breath and it felt like someone was sitting on my chest.’

‘They said the way I was using my inhaler meant only 10-to-20 per cent of the medicine was getting into my lungs,’ he said.

‘They showed me the correct inhaler technique and gave me a spacer to use, and the difference it has made to my asthma is incredible – I even ran the London Marathon for Asthma UK last year.

‘I never thought something so simple could completely turn my life around.’