Men who take small steps are 40 per cent more likely to have erectile dysfunction because they have weaker pelvic muscles, scientists believe.

A study measured mens’ stride length and how far they lifted their feet from the ground while walking.

Those with smaller steps were more likely to struggle with impotence than those with long strides.

The researchers believe the strength of the muscles in the pelvis play a role in the ability to get an erection. 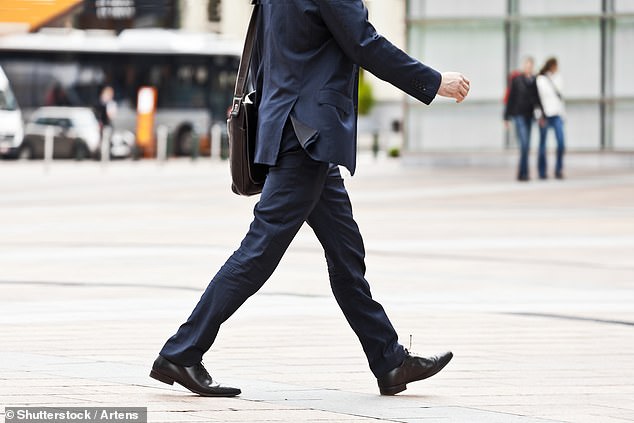 Men who take small steps are 40 per cent more likely to have erectile dysfunction because they have weaker pelvic muscles, scientists claim

‘We believe that both erectile dysfunction and small steps can be caused by weak pelvic muscles.’

Erectile dysfunction, also known as impotence, is when a man is unable to get or maintain an erection.

It is more common in the over-40s but affects men of all ages.

Failure to stay erect is usually due to tiredness, stress, anxiety or alcohol, and is not a cause for concern.

However, it can be a sign of an underlying medical condition such as high blood pressure or cholesterol, side effects of medication, or hormonal issues.

Lifestyle factors than can affect the condition include obesity, smoking, cycling too much, drinking too much, and stress.

The findings, published in the Journal of Sexual Medicine, come from a study on 324 men.

Their gait was measured by the length of each participant’s step and the height of their foot while walking.

It represents balance, flexibility, and muscle strength of the lower limbs and is used in Japan to assess a person’s risk of reduced mobility.

Erectile dysfunction was assessed with the 5-Item International Index of Erectile Function test.

Men with the smallest strides and the shortest lift off the ground were 40 per cent more likely to have erectile dysfunction.

The authors wrote: ‘Major differences between the 2 scores include such factors as balance, flexibility, and muscle strength.’

He said: ‘Stride may correlate with strength and libido and hence testosterone which drives sexual function.

‘Exercise is very much better for sexual functioning than a sedentary life but this also could correlate with stride length.’

Erectile dysfunction, of impotence, is defined as the inability to achieve or maintain an erection adequate for sexual satisfaction.

It’s often caused by stress, tiredness, anxiety or drinking too much alcohol, and usually resolves itself, according to the NHS.

Decreased physical activity has also been found to be a risk factor for erectile dysfunction, with studies finding those who exercise often have a lesser likelihood of impotence.

Resistance training and combat sport training are thought to be useful to treat erectile dysfunction by enhancing testosterone levels, self-esteem, and stress management.