Radical low-calorie liquid diets being trialled on the NHS can reverse type 2 diabetes in the long-term, a study has proven.

More than a third of patients following the 800-calorie regime of soups and shakes were still in remission two years later.

Scientists said the major findings ‘pull down the curtain on the era of type 2 diabetes as an inevitably progressive disease’.

The NHS announced in the autumn that it was trialling a three-month version of the weight-loss programme on diabetics.

Smaller trials have already shown half of patients following the diet go into remission from the condition, which can kill. 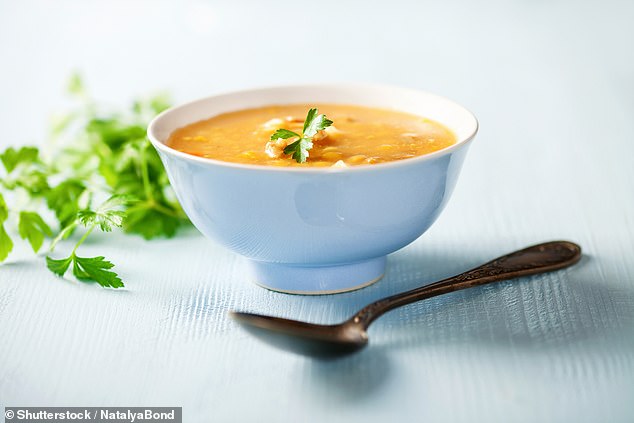 The latest trial, funded by Diabetes UK, recruited around 300 people in Scotland and Tyneside with type 2 diabetes.

Half of the participants received standard diabetes care from their GP and half were placed on the extreme diet.

This involved them following the regime for between three and five months, with support from an NHS nurse or dietitian to maintain the weight.

The first year results, published in 2017, showed 46 per cent of participants had reversed their type 2 diabetes after one year.

But the latest findings of the Diabetes Remission Clinical Trial (DiRECT) show almost two thirds of those who lost 22lbs (10kg) or more were in remission after two years.

WHAT IS TYPE 2 DIABETES?

Type 2 diabetes is a condition which causes a person’s blood sugar to get too high.

More than 4million people in the UK are thought to have some form of diabetes.

Type 2 diabetes is associated with being overweight and you may be more likely to get it if it’s in the family.

The condition means the body does not react properly to insulin – the hormone which controls absorption of sugar into the blood – and cannot properly regulate sugar glucose levels in the blood.

Excess fat in the liver increases the risk of developing type 2 diabetes as the buildup makes it harder to control glucose levels, and also makes the body more resistant to insulin.

Weight loss is the key to reducing liver fat and getting symptoms under control.

It can lead to more serious problems with nerves, vision and the heart.

Those in remission after the first year, who remained free of type 2 diabetes in the second year, had an average weight loss of 34lbs (15.5kg).

Among those who did not stay in remission, the average weight loss was 26lbs (12kg).

Professor Roy Taylor, from Newcastle University, said: ‘These results are a significant development, and finally pull down the curtain on the era of type 2 diabetes as an inevitably progressive disease.

‘We now understand the biological nature of this reversible condition. However, everyone in remission needs to know that evidence to date tells us that your type 2 diabetes will return if you regain weight.

‘Even during the second year of freedom from type 2 diabetes there was a highly suggestive difference in major complications of diabetes.

‘The numbers are still small at the moment, and further information on this must be gathered during the planned longer term follow-up.’

The researchers suggest weight loss can lower levels of fat inside the pancreas, helping it to recover and aiding production of insulin.

The results of the trial, carried out by Newcastle University and the University of Glasgow, were presented at a Diabetes UK conference.

Type 2 diabetes is a common condition that causes the level of glucose in the blood to become too high.

Britain’s diabetes epidemic has hit record levels, with soaring rates of obesity to blame. Nearly five million people have diabetes – with 90 per cent of those being type 2, according to figures.

By 2030 it is predicted this number will rise to 5.5 million, unless we get to grips with obesity – with two-thirds of adults and a third of children are now overweight.

Dr Elizabeth Robertson, director of research at Diabetes UK, said: ‘These results further challenge the perception that type 2 diabetes needs to be a lifelong condition for everyone diagnosed with it.

‘Remission of type 2 diabetes can be life-changing. DiRECT offers one potential solution, we are committed to working with the researchers and the NHS to ensure these exciting findings reach people with type 2 diabetes as soon as possible.’

NHS England announced in November that 5,000 patients would be prescribed a liquid diet of just over 800 calories per day.

If it proves successful, it could be rolled out nationally.

HOW MANY PEOPLE IN BRITAIN HAVE DIABETES?

Almost 4.7 million people are living with diabetes as record numbers are diagnosed in middle age, it was reported last month.

One in ten Britons are being diagnosed in their 40s, according to a shocking audit by Diabetes UK.

Experts found the number of confirmed cases has risen by almost seven per cent in just a year from around 3.69 to 3.81 million in 2017/18.

It means roughly ten per cent of Britain’s over-40s have now been told they have the disease.

Up to a further 900,000 more sufferers may not even realise they have the condition amid spiralling levels of obesity.

They blamed unhealthy lifestyles with some 90 per cent of diabetes sufferers having the type 2 form, linked to poor diet and a lack of exercise.

Rising levels of these ‘largely preventable’ type 2 cases have seen diabetes diagnoses more than double from 1.8 million a decade ago (1998).

The charity warned a further 12.3 million people in the UK are at risk in the fastest growing health crisis of our time.