Everything changed for HGTV star Ben Napier after the birth of his daughter just over a year ago. As he settled into his new life as a parent to baby Helen alongside his wife and co-star Erin, he realized it was time to get healthy.

The Home Town star revamped his diet and lifestyle, all while shooting the show, and has lost 55 lbs. over the last year. Napier, 35, said he did it for his family.

“Bringing Helen home and getting to experience those first few weeks with her and seeing how fast things change with children, it got my attention. She was different every day, and I want to experience as much of her life as possible. I want a long life so I can be there for Erin and Helen,” he told Today.

Napier also knew that he had a family history of health problems.

“I come from a long line of big men who don’t really discuss their health until it’s an issue,” he wrote on Instagram in February. “In 2014, one month before his 60th birthday, my father had emergency bypass surgery. Suddenly, this problem that seemed so far from me was standing right in front of me. Although I have made efforts to eat healthy and to exercise, it never seemed more real until I held this blue-eyed girl that is equal parts Erin and me and a whole lot more than I deserve in my arms. I never want to leave her side, which means taking care of my heart has to be a major priority.”

He decided to make a change soon after Helen was born in Jan. 2018. At that point, the 6’6” Napier weighed around 335 lbs., a product, he said, of the holidays, wrapping season two of the show and life as a new parent.

“I started getting back on the wagon last January — I think most of us do during that time of year,” he told Today. “… I had really overindulged and had put on more weight than I normally would during the holidays. So I had to really work on it.”

Napier cut down his carbohydrate intake and started doing cardio and weightlifting four to five times a week.

“I don’t get bored playing basketball, and could play for hours if I had the time. I’ve also done some intermittent fasting a couple of days a week,” he said.

Napier was able to stick to his new lifestyle, though the snack table on set, known as craft services, was always a threat.

“The most challenging part has been the craft services at work and catered lunches. Fifteen years ago, you give me snacks all day and a catered lunch, I’d be in heaven, but while filming Season 3, it was torture,” he said.

Erin said that she loves Ben at any size, but she’s thrilled he improved his health, especially with his family history.

“I used to have this recurring dream that we go to the doctor and he tells us Ben’s heart is failing and he doesn’t have much time left,” she said. “In one dream, I threw a ‘going away’ party for him where everyone he’d ever known came to send him off, to say their goodbyes, and I kept my arms around him, my ear to his chest so I could hear the steady beat of his heart. I would wake up in a cold sweat with tears in my eyes.”

So Erin will happily endure the early morning wake-ups when Ben is playing basketball outside.

“Every time I hear that ball bounce, I think of his heart beating so fast and staying strong, and I imagine us old and gray together,” she said. “That makes me really happy.” 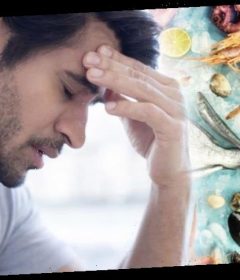