GPs spending millions on homeopathy treatments and pen is pumps

Revealed: How GPs are STILL wasting thousands of pounds of NHS cash on bogus homeopathy ‘remedies’

Family doctors are still spending tens of thousands of pounds every year on bogus homeopathic products, MailOnline can reveal.

NHS spending on the quack medical treatment was effectively banned four years ago after it was ruled an ineffective use of taxpayer’s money.

But GPs in England have still prescribed nearly £150,000 of homeopathic items since 2018 – the first full year after the ruling, analysis shows.

Family doctors have also spent £280m of taxpayer funds on doling out paracetamol, despite the NHS begging GPs to send people to buy it for pennies at supermarkets instead. 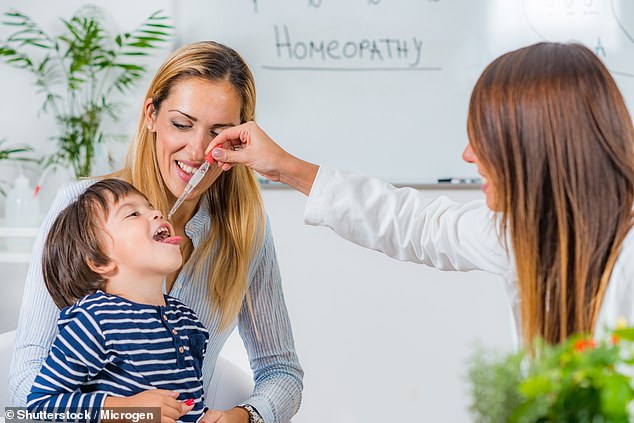 Homeopathy was discontinued in the NHS in England in 2017 due to a lack of evidence however, official dats shows some medics are still prescribing it a taxpayers’ expense (stock image) 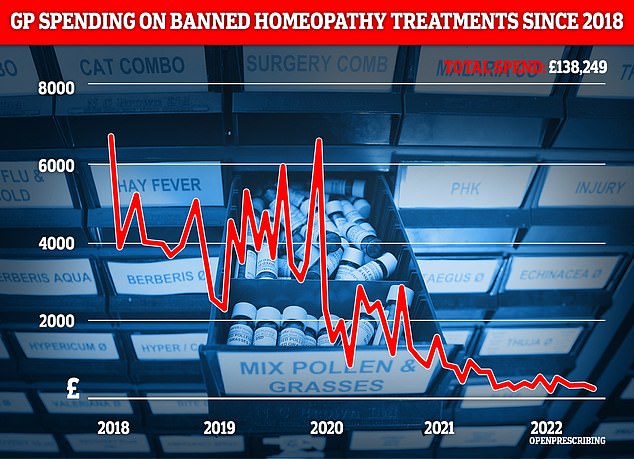 Analysis shows GPs in England have prescribed a total of £138,249 of homeopathy treatments since 2018, after NHS bosses banned taxpayer spend on the bogus treatment 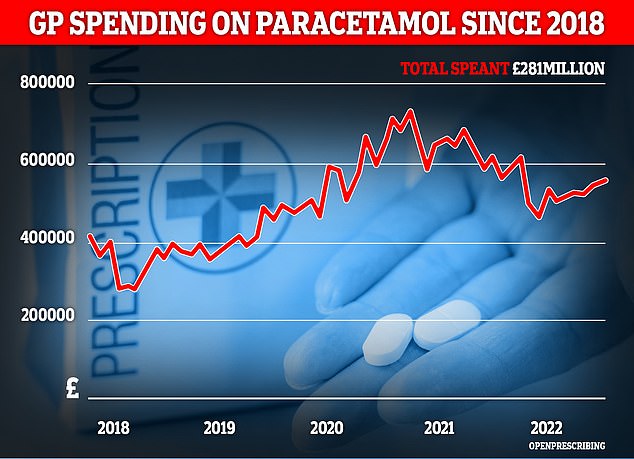 Whilst homeopathy spend has, on the whole, been declining since the 2018 ban, a prohibition on family doctors prescribing the common painkiller paracetamol and instead sending patients to buy them at supermarkets has broadly remained the same and has cost the taxpayer £281million over four years

GPs have also spent tens of thousands on dishing out normally illicit drugs cocaine and ketamine, almost £70,000 and £100,000, respectively.

Whilst both cocaine and ketamine have their legitimate medical uses, the spend on homeopathy comes at a time of increasing pressure on NHS budgets.

Repeated scientific studies have found 200-year-old ‘treatment’ is no more effective than a placebo.

Homeopathy operates on a logic that ‘like cures like’, so a substance that effectively causes certain symptoms can be, in theory, used to treat similar conditions.

WHAT ARE THE ORIGINS OF HOMEOPATHY?

Homeopathy was first coined in 1807 by German doctor Samuel Hahnemann, and focuses on three principles: like cures like, dilution, and ‘water remembers.’

Dr Hahnemann believed that medicine in his time was doing more harm than good, so he began to conduct experiments on volunteers and himself.

One such experiment included eating the bark of a cinchona tree, which was then used as a treatment for malaria. Scientists have since found that this bark contains quinine, an antimalarial drug.

After eating some of the bark, Hahnemann experienced symptoms which he likened to those of malaria, spawning the first principle ‘like cures like.’

The doctor thought that if a substance in large doses causes certain symptoms, it can be used in small doses to cure them.

According to the British Homeopathy Association, the remedies are used by over 200 million people worldwide to treat both acute and chronic conditions.

For example, a homeopath might recommend a hay fever sufferer who has itchy and watery eyes takes a treatment involving an onion solution as the vegetable provokes the same reaction in people when sliced.

But these so called ‘remedies’ are diluted with so much water there is often none, or barely any, of the original substance left.

Some treatments are manufactured to contain the watered down saliva from dogs with rabies, or even the urethral discharge of men with sexually transmitted disease gonorrhoea.

Despite the lack of scientific evidence for the treatments some GPs in England still back them, prescribing £138,249 of them in the past four years.

The data, taken from an NHS England-funded database run by Oxford University called OpenPrescribing, which breaks down GP prescription spending by item, runs up to September and puts the total amount of items issued at 7,402.

This works out at about £16.43 per homeopathic medication course.

The multi-million dollar spend on the common and cheap painkiller paracetamol will also raise eyebrows.

NHS England forbade GPs from prescribing a swathe of common medications in 2018, including paracetamol, after it was found the health service was spending about £3 per pack.

Instead, family doctors were urged to send patients to the supermarket where they could buy it for less than a pound.

The move was controversial at the time, with some medics concerned that patients on low incomes would be disadvantaged by the policy.

But since the start of 2018, the GPs have ordered 8million prescriptions of paracetamol worth a total of £281million pounds.

This is about £3.40 per pack, almost nine times the 39p per pack of 16 tablets that major supermarket Asda charges.

Other items included in the 2018 ban are also still routinely prescribed, with England’s GPs dishing out £24million worth of sunscreen and £65million worth of common cough syrup.

But prescriptions for these items have continued as well, with £1.3million spent on acne medications, and £2.3million on silk pyjamas.

John O’Connell, chief executive of the Taxpayer’s Alliance, said the NHS must crackdown on spending on ‘quack science’ and items that can be bought cheaper in a supermarket.

‘This spending on quack science is baffling,’ he said.

‘Continuing such outlays – though a small amount of money – obviously raises questions about all areas of NHS spending and how well that is done.

‘The NHS should get serious and ensure they put a stop to prescribing routine, over the counter drugs as well as homeopathy medicines.’

But an NHS England spokesperson said they had already curbed these ‘low value treatments’ and that the spending was falling.

‘The NHS has already clamped down on medications and interventions that are of low value for both patients and taxpayers, such as homeopathic treatments, dietary supplements and herbal remedies, and the number of these products being prescribed continues to fall,’ they said.