Girl whose tumour was spotted by opticians needs £200k for treatment

Girl whose deadly brain tumour was only spotted by eagle-eyed opticians needs £200,000 for pioneering drug treatment in Germany 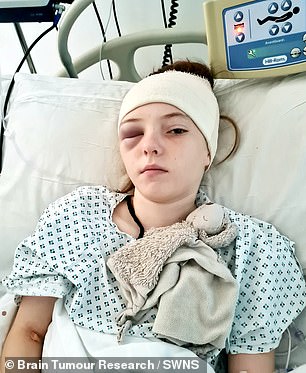 Grace Kelly, 12, has already undergone surgery and treatment for her cancer but her family are now trying to raise thousands of pounds for pioneering treatment in Germany

A schoolgirl whose brain tumour was spotted by opticians is trying to raise £200,000 for potentially life-saving treatment in Germany.

Grace Kelly, from Leicester, went to Specsavers for a routine check-up when opticians discovered a strange swelling behind her eyes in August last year.

An MRI scan subsequently revealed the now 12-year-old had a glioblastoma multiforme (GBM) tumour the size of 50p coin growing in her brain.

This is the same kind of cancer that killed The Wanted’s Tom Parker last month.

Grace, described as a ‘superhero’ by her parents, underwent an eight-hour operation to try and remove the GMB on September 3.

Surgeons could only cut away 80 per cent of the tumour because taking any more would leave the schoolgirl at risk of a stroke.

She then went through several rounds of radiotherapy and chemotherapy.

However, a subsequent scan revealed the tumour had grown back and a second had started to develop.

Grace’s family are now desperately trying to raise £200,000 to get her pioneering immunotherapy treatment for the cancer in Germany, which is currently unavailable on the NHS. 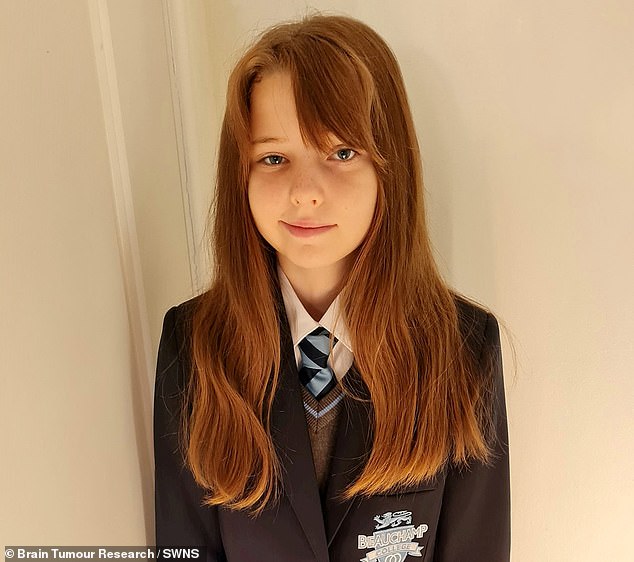 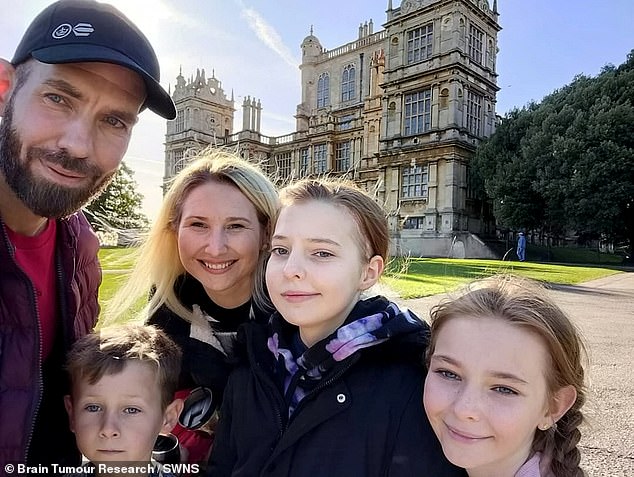 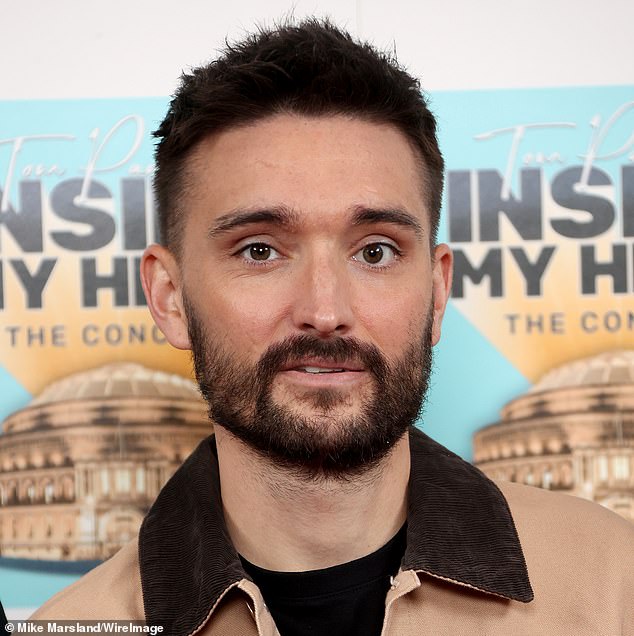 Grace has a glioblastoma multiforme, the same kind of cancer that killed The Wanted singer Tom Parker last month. Mr Parker died aged 33 after an 18-month battle with a deadly and aggressive form of brain cancer

Glioblastoma is considered the most aggressive tumor that can form in the brain.

Patients have a 10 percent chance of surviving five years after their diagnosis, according to figures. The average lifespan is between 14 and 16 months.

Three adults per every 100,000 will be struck down with a glioblastoma, says The American Association of Neurological Surgeons.

It is most commonly found in men aged 50 to 60, and there is no link between developing glioblastoma and having a previous history with other cancers.

WHAT IS THE TUMOR MADE OF?

The tumor is made up of a mass of cells growing quickly in the brain, and in most cases patients have no family history of the disease.

It won’t spread to other organs, however, once it is diagnosed, it is nearly impossible to target, surgeons claim.

Unlike other types of brain cancer which are more specifically located, glioblastoma can occur in any part of the brain.

WHAT TREATMENT IS AVAILABLE?

Because the tumor likely already spread deep into the brain by the time it is diagnosed, the cancerous tissue is incredibly difficult to remove.

Surgeon will only ever remove the tumor, or part of the tumor, if it won’t do any damage to the surrounding brain tissue.

Brain tumors are graded from between one to four, depending on how fast they grow and how aggressive they are.

Malignant tumors are either given a high-grade three or four, while benign ones are given a lower grade one or two.

Glioblastoma is often referred to as a grade four astrocytoma – another form of brain tumor.

Patients typically complain of symptoms such as confused vision, trouble with memory, dizziness and headaches.

Symptoms are somewhat nonspecific, and vary from person to person, and may not persist.

The disease is therefore impossible to diagnose based on symptoms alone.

Immunotherapy is a type of cancer treatment which trains the body’s own immune system to recognise and fight the disease.

As opposed to other forms of therapy, it can help stop cancer returning as the immune system remembers the rogue cells and can attack if it returns.

It can also trigger fewer side effects than chemotherapy.

Some immunotherapy treatments are available in the UK but that isn’t the case for Grace’s cancer.

Her mother Vanessa, 32, recalled how her daughter had always been fit and healthy, prior to opticians spotting the signs of cancer.

‘The doctor showed my husband, John, and I the scan images, which showed a small mass, about the size of a 50 pence piece,’ she said.

‘He told us that Grace had a GMB brain tumour. We were really shocked and in a state of disbelief.

‘I couldn’t understand how this could be happening to our daughter and I felt very scared.’

She told how the family were devastated after an MRI scan revealed the tumour had not only grown back after surgery but a second one had also emerged.

‘We were utterly devastated and cried all the way home from the hospital, it broke our hearts when we had to break the news to her, she was so brave and vowed to beat this,’ she said.

Now Ms Kelly and her husband John are now trying to crowdfund £200,000 for Grace to receive private immunotherapy in Cologne.

This would help cover the cost of creating tailor-made cancer vaccines for Grace.

Grace is also signed up for a treatment trial at Germany’s University Hospital of Wurzburg and is currently waiting to see if she is eligible.

On the fundraising page Ms Kelly said her family had undergone a ‘rollercoaster’ of fear, pain, hope and love as she begged for people to donate.

‘She is our superhero, and amazes us at how well she is doing with her treatment so far,’ she said.

‘Please help us fund this extra treatment for our beautiful daughter, please hep us get her to Germany so she has the best chance of beating the odds..

Ms Kelly, a healthcare assistant, added that it was unbelievable that immunotherapy for Grace’s cancer was not available in the UK.

‘I find it shocking and frustrating that these pioneering treatments are not available in the UK,’ she said.

‘We are shocked that the standard of care for brain tumours has been the same for the last 20 years.

‘It’s so distressing knowing there’s no cure for what Grace has, but we don’t want to give up.’

Ms Kelly is also planning on doing a charity run for Brain Tumour Research an organisation dedicated to curing the disease. 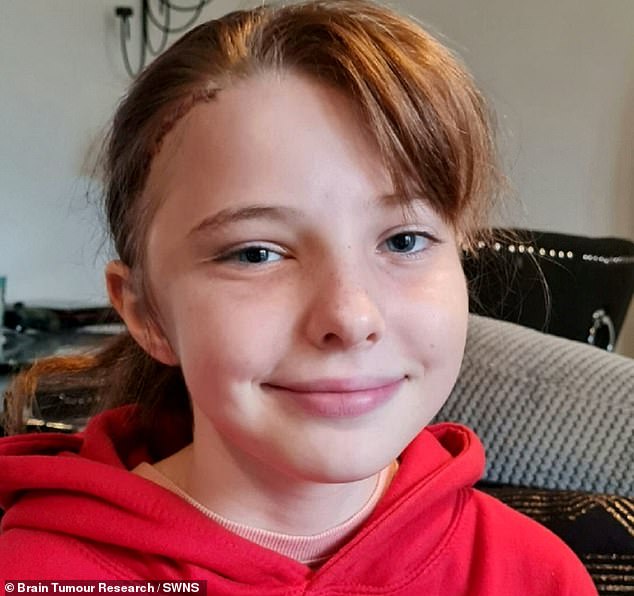 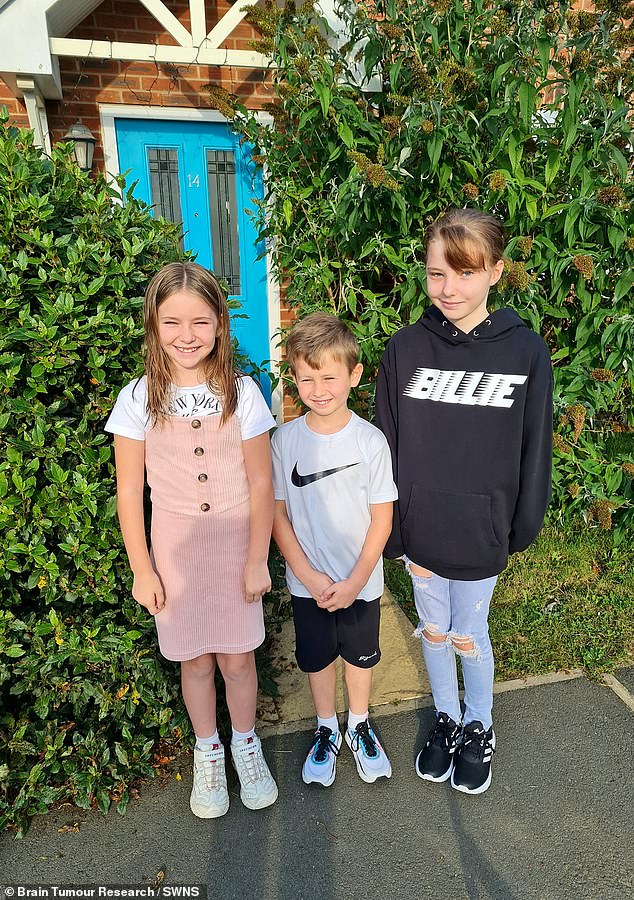 12-year-old Grace (right) with her younger siblings, sister Marissa (left) and brother Nathan (centre). The family have described Grace as ‘our superhero’ for her courage during her cancer treatment 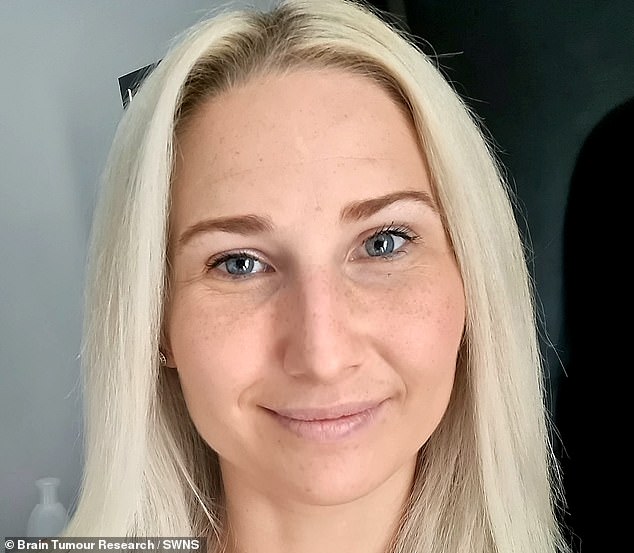 Brain Tumour Research’s community development manager, Matthew Price, said: ‘This is such a devastating story, and we are so very sorry to hear of Grace’s terrible diagnosis.’

‘We’re really grateful to Vanessa as it’s only with the support of people like her that we’re able to progress our research into brain tumours and improve the outcome for patients like Grace who are forced to fight this awful disease.’

Glioblastoma is the most common form of brain tumour in the UK, with more than 2,000 cases diagnosed every year.

But it has a notoriously poor prognosis, with patients usually only living for 12 to 18 months after the cancer is spotted.

This is partly to do with the speed the cancer spreads, but it is also due to a lack of treatments able to successfully combat it.

In 2018, former Labour MP Tessa Jowell died after a battle with the disease and former US Senator John McCain succumbed to the cancer in 2017.

It can kill by shutting down the brain entirely or pressing against the brainstem, which controls breathing and pulse.

Glioblastoma forms from cells called astrocytes that support nerve cells and has usually spread deep into the brain by the time it is diagnosed.

Like many brain tumours, scientists do not know what causes the cancer and in most cases patients have no family history of the disease.