Get the flu jab before winter hits, health officials urge

Get the flu jab before winter hits, health officials urge as they confirm delays to children’s nasal spray are now over

Health officials have urged people to get the flu jab before winter hits after confirming the delays to children’s nasal spray are over.

Children will be rushed through vaccinations at their schools ‘as soon as possible’ now the issue has been fixed, according to Public Health England (PHE).

Earlier this month, it was revealed a quarter of the nasal spray vaccines would be delivered later than expected.

Hundreds of schools were told to pause vaccination sessions they had planned for the middle of November.

The programme is once gain underway while other at-risk people and adults are being reminded the best time to have the vaccine is before December – when flu begins to circulate widely. 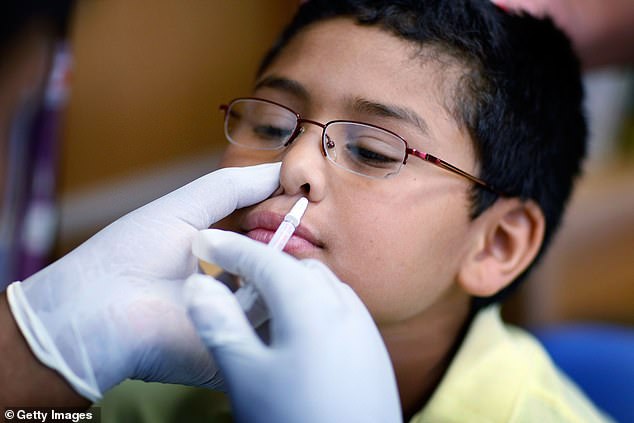 Dr Mary Ramsay, head of immunisation at PHE, said: ‘The flu vaccine is the best defence we have against what can be a serious and fatal illness, and flu season is just around the corner.

‘If you are in an eligible group, visit your GP or pharmacist as soon possible to ensure you are protected.’

Plans for vaccinating children were stalled this month after drug company AstraZeneca said it needed ‘to repeat some tests’ for the nasal spray.

The problems were not related to the safety or efficacy of the vaccine itself but that their testing processes hadn’t worked.

WHO IS ELIGIBLE FOR THE NHS FLU JAB?

The injected flu vaccine is offered free of charge on the NHS to people who are at risk.

Over-65s and people with diabetes and chronic respiratory conditions, such as asthma.

Parents with children aged over six months with asthma or diabetes or weakened immunity due to disease or treatment are also being encouraged to bring them into GP surgeries for a free jab.

Other groups include residents in long-stay care homes and people who have lowered immunity due to HIV or are on steroid medication.

NHS workers are also urged to get a free flu jab in order to protect patients.

Flu is not normally life-threatening for healthy people, and the occasional bout of flu gives better long-term protection than a flu vaccination.

The adult flu programme was not affected by the delay and has continued as normal.

However children are ‘super-spreaders’ of the flu virus and concerns grew the infection will spread easily to adults if youngsters were left unprotected as peak flu season approached.

Now, PHE said the sessions would be rearranged for ‘as soon as possible’ but that children at high-risk, such as asthmatics, should visit their GP instead.

GPs were told to reserve and prioritise stocks for toddlers and children with problems such as asthma and give them adult vaccines.

However, jabs for adults are not as effective in children, particularly as many youngsters hate needles.

Parents of children in high-risk groups, such as those with asthma or diabetes, are still being advised to contact their GP to be seen as soon as possible.

Children who are aged two and three are eligible for the flu vaccine nasal spray through their GP surgery.

People aged 65 and over, children and adults with underlying medical conditions and pregnant women are urged to get their free vaccine in the next few weeks.

Professor Stephen Powis, NHS England national medical director, said: ‘Flu can be extremely serious and even kill in some cases, and getting vaccinated is the best protection against it.’

Professor Martin Marshall, chairman of the Royal College of GPs, said: ‘For those in at-risk groups, such as young children, elderly people, those with long-term conditions and pregnant women, flu has the potential to trigger life-threatening complications.

‘The best defence against the flu is to be vaccinated and we strongly urge all patients in at-risk groups to get vaccinated and for parents to ensure their young children receive their vaccine as soon as possible.’

At-risk groups eligible for the flu vaccine include pregnant women who have a much higher risk of serious illness if they get the flu.

Clare Livingstone, professional policy adviser at the Royal College of Midwives (RCM), said: ‘The RCM recommends that pregnant women have the flu vaccination.

‘The flu is a highly infectious illness, which can be very serious during pregnancy for both mums-to-be and their babies.

‘That is why we are encouraging all pregnant women to have the vaccine as soon as possible so they are protected from flu viruses circulating this winter.’ 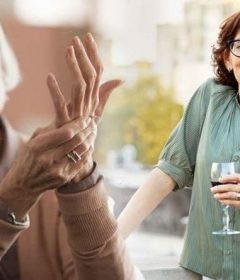 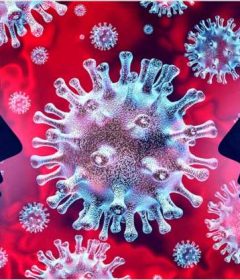 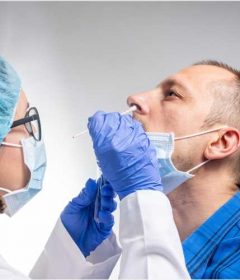