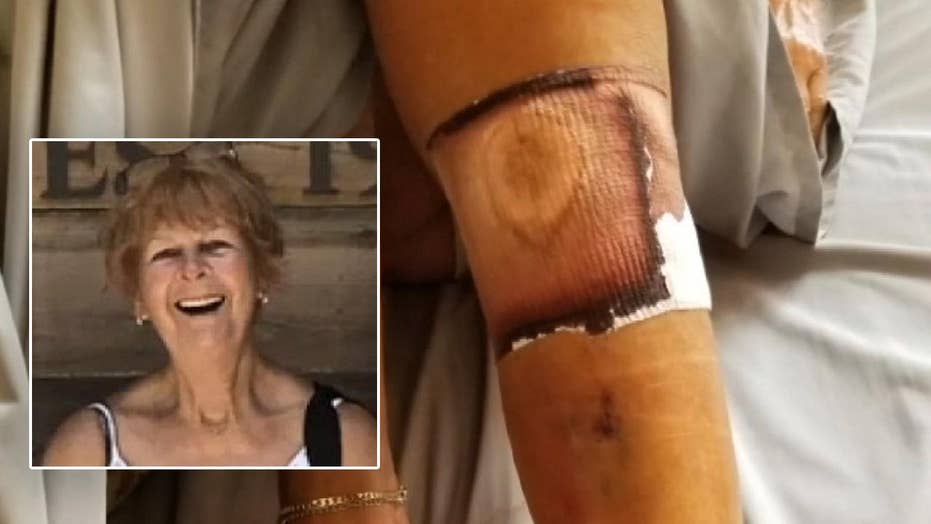 Florida woman dies after falling into the ocean and suffering a cut which allegedly led to necrotizing fasciitis.

A family’s trip to the beach ended in tragedy after their 77-year-old grandmother fell into a small hole in the water and cut her leg, providing an opening for a deadly flesh-eating bacteria infection that ultimately led to her death last week.

Lynn Fleming, of Ellenton, Fla., had been visiting Coquina Beach with her son, daughter-in-law and their two sons two weeks ago when the fall happened.

“There was a little depression that she couldn’t see because it was under the water,” Wade Fleming, the woman’s son, told Fox 13 Tampa Bay. "She fell into it, came out with a little 3/4–inch cut; a bump on her leg. It was just a small cut, didn’t think much of it. We got the swelling down, but it just kept bleeding.”

Wade Fleming said that his mother sought treatment at the hospital a few days later, and she was given a tetanus shot and antibiotics, but her condition rapidly worsened. He said friends found her unconscious at her home and she was rushed back to the hospital on June 17, when she was diagnosed with necrotizing fasciitis, also known as flesh-eating bacteria.

She suffered two strokes and organ failure while undergoing several surgeries to remove the infection, but died on June 27, according to Traci Fleming, her daughter-in-law.

“It seems like a ‘Lifetime’ movie really,” her grieving son told Fox 13 Tampa Bay. “I can’t even believe it, that it’s really even happening. It’s just all happening so fast.”

Necrotizing fasciitis is a rare bacterial infection that spreads quickly in the body and can cause death, according to the Centers for Disease Control and Prevention (CDC). Accurate diagnosis, rapid antibiotic treatment and prompt surgery are crucial in stopping the infection from spreading. The infection most commonly enters the body through a break in the skin, and symptoms often develop quickly. Patients typically first notice swelling and redness followed by severe pain and even fever.

The CDC recommends getting immediate medical attention if these symptoms develop following an injury or surgery.

Wade Fleming said his mother did have several symptoms and hopes that others learn from their tragedy.

“This is the place she loved,” Traci Fleming, the woman’s daughter-in-law, told Fox 13 Tampa Bay. “She couldn’t wait to get down here and retire. She loved the ocean; she loved walking on the beach. Unfortunately, it’s the place that took her life by freak accident.”