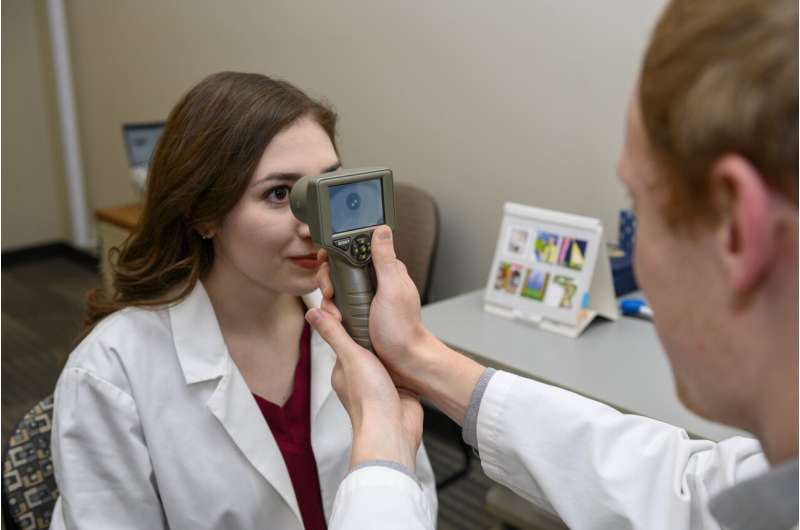 Measuring how the eyes’ pupils change in response to light—known as the pupillary light reflex—could potentially be used to screen for autism in young children, according to a study conducted at Washington State University.

First author Georgina Lynch said the proof-of-concept study builds on earlier work to support the continued development of a portable technology that could provide a quick and easy way to screen children for autism, a disorder that affects communication and social interaction with others. Such a tool would allow health care providers to catch children earlier in their development when interventions are more likely to benefit them.

“We know that when we intervene as early as ages 18 to 24 months it has a long-term impact on their outcomes,” said Lynch, an assistant professor in the WSU Elson S. Floyd College of Medicine who worked with children with autism while practicing as a speech-language pathologist. “Intervening during that critical window could be the difference between a child acquiring verbal speech and staying nonverbal. Yet, after 20 years of trying we still have not changed the average age of diagnosis here in the U.S., which is four years old.”

Published in the journal Neurological Sciences, the study tested 36 children aged 6 to 17 who had been previously diagnosed with autism along with a group of 24 typically developing children who served as controls. Children’s pupillary light reflexes were tested by trained clinical providers using a handheld monocular pupillometer device, which measures one eye at a time. Analyzing the results, the researchers found that children with autism showed significant differences in the time it took for their pupils to constrict in response to light. Their pupils also took longer to return to their original size after light was removed.

“What we did with this study is we demonstrated the parameters of interest that matter—speed of constriction and return to baseline,” Lynch said. “And we demonstrated it with monocular technology because we knew there is no significant difference between eyes in terms of the pupillary response in autism, unlike in head injury or concussion where it’s common to see unequal pupil sizes.”

An earlier study led by Lynch tested children in a laboratory setting using binocular pupillometry, which uses an expensive, stationary setup that measures both eyes at once. The lower expense and portability associated with monocular technology made it possible to move testing into clinical settings similar to those in which the screening tool Lynch is developing might be used once it is commercially available.

Lynch is now working to expand testing to a group of 300 or more 2- to 4-year-olds across a larger number of clinical sites. Data from that study will be used to validate the earlier findings and will be integrated into the ultimate screening device to provide a benchmark providers can use to decide whether or not to refer a child for evaluation. Meanwhile, Lynch is preparing to file for Food and Drug Administration premarket approval for the screening device through Appiture Biotechnologies, a spinoff company she cofounded to help move this technology from an academic research setting toward widespread use in pediatric clinics.

Lynch’s desire to improve autism screening grew from her experiences watching parents struggle through the cumbersome process of pursuing a formal diagnosis for their child.

While an estimated one in 44 children in the U.S. are diagnosed with autism spectrum disorder (ASD) by age 8, many kids get misdiagnosed or missed altogether due to the subjective nature of the diagnostic process. Having a quick, objective screening method to bolster behavioral screening could help improve the accuracy and speed with which children are diagnosed. Looking at the pupillary light reflex as a potential screening biomarker made sense to Lynch given her own observations and earlier studies that found abnormalities in the pupillary light reflex of children with autism.