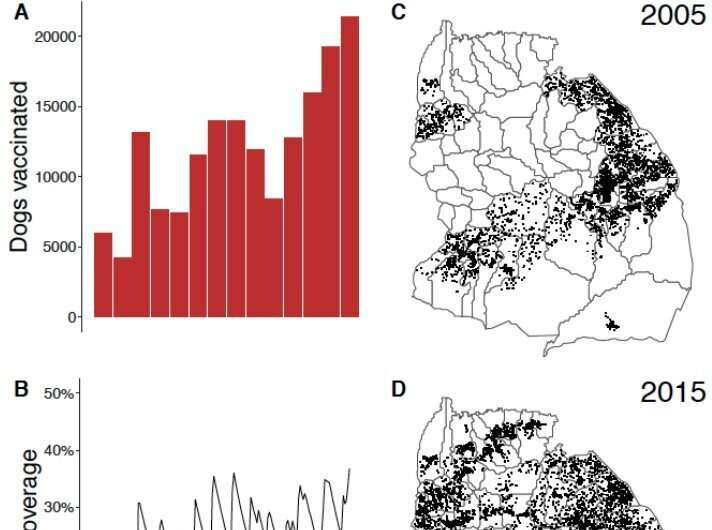 Dog-mediated rabies, a fatal disease that kills tens of thousands of people in Africa every year, remains persistently endemic in affected regions. That is, despite an overall low virus prevalence, and attempts to combat the deadly pathogen.

The findings, from an important new study led by the University of Glasgow and published in Science, are based on information gained from tracing the fatal disease in a population of more than 50,000 dogs in Tanzania from 2002 until 2016.

Dog-mediated rabies is transmitted through bites and scratches—either from dog to dog or dog to human—and is almost 100% fatal unless immediately treated with a post-bite course of injections that prevents the infection from taking hold. The deadly zoonotic virus is responsible for tens of thousands of deaths each year, mostly affecting children, particularly in low- and middle-income countries.

The WHO leads the collective United Against Rabies to drive progress towards zero human deaths from dog-mediated rabies by 2030 because the disease remains endemic across Africa and Asia. The persistent circulation of rabies at very low prevalence in largely unvaccinated domestic dog populations is an enduring scientific enigma.

Now an international team of researchers, led by Professor Katie Hampson at the University of Glasgow, has revealed new insights into the dynamics of this deadly disease in affected regions. The findings explain how the pathogen can persist at such low levels—less than 0.15% of the dog population is infected annually—meaning that it can spread under the radar.

The study found that the mobility and behavior of individual rabid dogs helps to ensure that the virus can disperse and circulate at such low virus prevalence. The findings showed that a small proportion of infected dogs act as “super spreaders,” traveling more than 10km to bite other animals and bringing new virus lineages to different communities, thereby seeding new outbreaks.

Prof Katie Hampson said: “The virus uses a clever strategy for low level persistence, which makes its dynamics harder to both detect and predict. But these new mechanistic insights also show why scaling up dog vaccination is so necessary.”

To understand the virus dynamics, researchers tracked rabies transmissions, dog population densities, disease incidence and vaccination campaigns in a large population of domestic dogs in Serengeti, Tanzania for more than a decade.

According to the findings, the processes that underpin the persistence and prevalence of rabies operate on scales much smaller than those typically modeled for the disease—often down to the behavior of a few individual infected dogs

Over the 14 years, the researchers were able to pinpoint hundreds of introductions from neighboring villages that were able to sustain circulation across the region. The variability in rabid dog biting behavior means that most introductions do not take off, but some of the outbreaks that do last for years, illustrating how co-circulation of different rabies virus lineages underpins virus persistence.

Rabies is one of the Neglected Tropical Diseases that predominantly affects poor and vulnerable populations who live in remote rural locations. Approximately 80% of human cases occur in rural areas. Although effective treatments exist to prevent the onset of rabies following a bite, they are not readily available or accessible to those in need.