Doctors think people with obesity are much less interested in losing weight than they actually are, an Australian-led study has found. 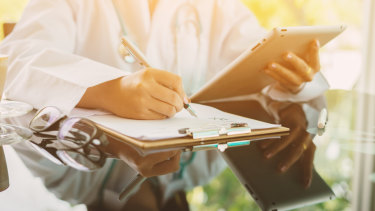 Doctors underestimate the attempts people with obesity have made to lose weight, a new study has found.Credit:Shutterstock

Researchers surveyed over 14,500 people with obesity and 2500 doctors from 11 countries, including Australia.

Professor Ian Caterson, director of the University of Sydney's Boden Institute and lead author of the study, said the results indicate there is an opportunity for doctors to "initiate earlier, effective weight loss conversations with minimal fear of offence".

Sixty-eight per cent of people with obesity said they wanted their doctor to start conversations around weight management.

"We hope that these findings can help remove the barriers between people living with obesity and their health care providers and drive more positive engagement in the treatment of obesity."

President of the Royal Australian College of General Practitioners Dr Harry Nespolon said there was a focus on training young doctors to be able to talk to patients about obesity, although it was also important for those conversations to be appropriate, as it was rare for a patient to present with obesity as their only health concern.

"You can't talk to a patient about everything every time they walk through the door," he said, adding that he thought 71 per cent of doctors thinking people with obesity were not interested in losing weight seemed like a high figure.

"I find it hard to believe… [because] most people are interested in losing weight, and it's a conversation I have in practice several times a day."

However, Dr Nespolon said doctors also realise it losing weight can be difficult, and patients should never be afraid to bring up their weight with their GP.

"The culture of Australian healthcare is that a person can sit down and talk about anything with a GP, and that's definitely a culture we encourage."

Professor Philippa Hay, director of Sydney's Wesley Mission Eating Disorders Centre and its program for high-BMI eating disorder patients, was not surprised by the study's results. She attributed the underestimation of people with obesity's weight loss attempts to a misconception that people who have a high BMI are unmotivated.

"The elephant in the room is weight stigma … a view that people [with obesity] don't try hard or don't care," she said.

In contrast, she said people with high BMIs are very likely to know they are overweight or obese.

"The higher your BMI, the greater your weight and shape concerns, and the more likely you are to have dieted or tried to have done something about it."

Professor Hay said the delay in seeking treatment could be attributed to public messages about weight loss, which "run counter to seeking medically supervised, psychobehavioural programs" that could better manage obesity alongside its associated psychological conditions, including depression and eating disorders.

"In the general population, the view is that a GP is not the first person to go for help with your weight, the message is to go to a gym, or a weight loss program," she said.