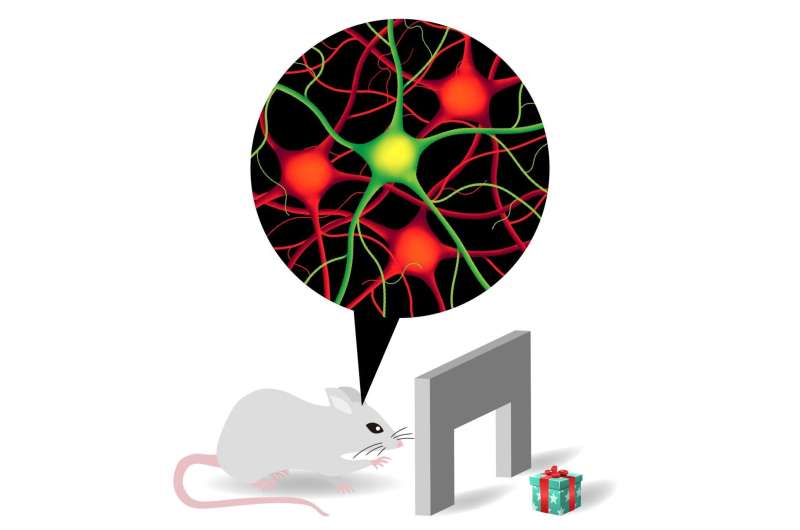 Research conducted at the Okinawa Institute of Science and Technology Graduate University (OIST), has looked at the importance of specific neurons for seemingly simple, day-to-day tasks that involve reaching for and grasping objects. The study was published in Cell Reports.

“We focused on the neurons located in the basal ganglia,” said Professor Gordon Arbuthnott, who leads OIST’s Brain Mechanisms for Behavior Unit. “This part of the brain is connected to the cerebral cortex, which is involved in motor function. And neurons, or nerve cells, are specialized cells that act as the building blocks of the nervous system—they connect input from the outside world to movement in our muscles.”

Patients that suffer from damage to the basal ganglia can have their motor abilities severely impacted, making daily reaching-and-grasping tasks, like picking up a cup of coffee or putting on a jacket, near impossible.

“We know that interruptions to these basal ganglia neurons are involved in the development of diseases like Parkinson’s and Huntington’s, but the exact cellular mechanisms behind this isn’t properly understood,” Professor Arbuthnott went on to explain.

The neurons in question are striatal spiny projection neurons, a large group that contributes to smooth motor function. There are two distinct types—D1 direct striatal output neurons, which connect directly with the output of the basal ganglia, and D2 indirect output neurons, which take a longer route via other areas of the brain. Depending on a person’s behavior, different groups made up of different compositions of these two neurons will form. Most groups have both D1 and D2 neurons although there are exceptions, with some groups only having one. Thus, it’s a dynamic system where the two different types work together. Previous research has indicated that, for tasks involving movement, the D1 neurons give the ‘go’ signal whereas the D2 neurons give the ‘stop’ signal. The researchers decided to change the activity of each type independently, to test this idea.

To perform the experiment, mice were trained to reach through an opening in their chamber and grasp a chocolate food pellet. Failure to retrieve the pellet was classed in one of three ways. An ‘initial’ error occurred when the mouse couldn’t get their paw through the opening of their chamber. A ‘final’ error was when a mouse’s paw ended in the wrong place after it crossed the opening. And a ‘grasp’ error was when the mouse’s paw made it to the pellet, but they were unable to pick it up.

When mice with both D1 and D2 neurons working as normal were trained in this task, they were most likely to fail with the grasp error, which occurred in more than half the failures. With this in mind, the researchers used optical methods so that either D1 neurons or D2 neurons could be excited or inhibited by light.

The researchers found that both exciting and inhibiting the D1 type resulted in a significant decrease in the success rate of treat retrieval, and that, proportionately, the number of failures from the ‘initial’ error increased.

In contrast, exciting the D2 type also resulted in a significant decrease in the success rate but, this time, it was the ‘final’ error that increased proportionately.

But, interestingly, when the D2 types were inhibited, the success rate of treat retrieval increased.

“We have several ideas as to why this might have occurred,” said Professor Arbuthnott. “If we imagine that a small group of D2 neurons is enough to reach the target then exciting all the D2 cells in the area might make the small group get lost in the noisy activity of the many, while inhibiting the large group could leave behind just the most strongly excited neurons, which can then effectively guide the mouse’s behavior.”

The results found that both types were necessary for the smooth motor function of all movement. The mice have trouble with the starting part of the movement without the D1 cells; and, in most cases, the pellet cannot be retrieved if the D2 cells aren’t working correctly. However, the stop-and-go theory was not supported by this study as, although D1 cells were found to be necessary for controlling the initial part of the reach, the researchers found that D2 cells were actually needed for aiming for the treat, rather than stopping the task.