Weekly injection of diabetes drug tirzepatide can help an obese person shed a FIFTH of their body weight in 18 months, study finds

A diabetes drug has shown remarkable effectiveness at helping non-diabetics lose weight – setting it up to become an important weapon in America’s battle against obesity.

Researchers from Yale University led research into tirzepatide, finding that the injections can help a person struggling with their weight drop around 20 percent of their pounds when taken weekly alongside standard diet and exercise.

The drug has gained attention in recent years when experts realized that it had properties that could assist in weight loss. For this study, the Yale team partnered with Eli Lilly – manufacturers of the drug – to find the ideal dosage to maximize returns.

Currently, the drug is only available via prescription and has only been approved by regulators to treat diabetes. Eli Lilly is likely to seek approval for it as a weight loss drug as well, though. 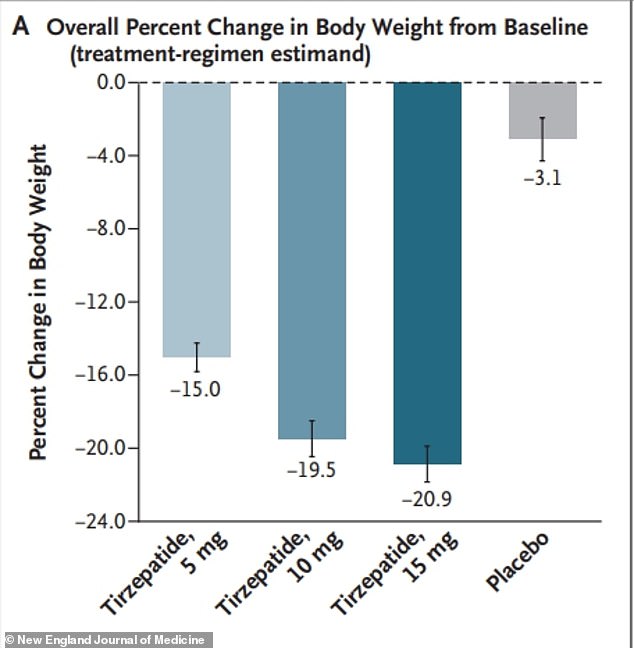 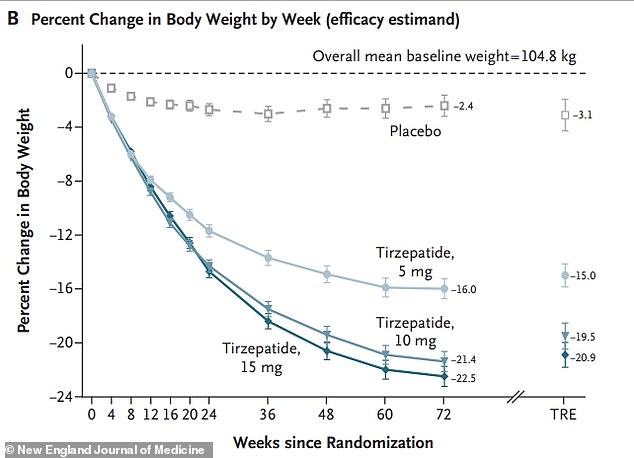 All three dosages of the drug, five, 10 and 15 mg, were found to be significantly more effective than just a placebo, diet and exercise

‘This is an unusually substantial degree of weight reduction in response to an anti-obesity medication as compared with findings reported in other phase 3 clinical trials,’ researchers wrote.

Researchers, who published their findings Thursday in the New England Journal of Medicine, gathered data from 2,539 people over 72 weeks for their study.

Each of the patients either had a body mass index of 30 or higher – high enough to be considered obese – or of 27 with at least one other weight related condition.

Because the drug’s effectiveness for diabetics is already known, there were not included in the study.

Participants were split into four groups. One was a placebo group who did not take any medication. The others received five, 10 or 15 milligram (mg) doses of the drug weekly.

The placebo group served as a control, and using just diet and exercise alone lost an average of 3.1 percent of their body weight each.

Even smaller doses of the drug, just 5 mg weekly, was enough to make a substantial impact. 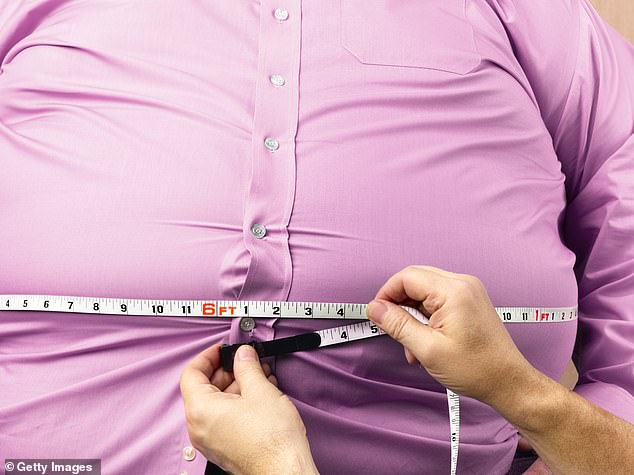 Nearly half of Americans suffer from obesity, making it a growing crisis in the United States (file photo)

Researchers found that those who received the smallest doses lost an average of 15 percent of their body weight – around five times the success of just diet and exercise alone.

HOW DOES OBESITY AFFECT THE BRAIN?

Obesity’s affect on the brain is poorly understood and a growing area of research.

A study by the University of Alabama suggests weight gain impairs our cognitive functioning even in those without dementia.

And brain scans taken of morbidly obese patients reveal older people who carry dangerous amounts of weight have higher levels of degradation of the brain cells.

However, whether this also occurs in younger patients is unclear.

Obesity has also been linked to a reduced attention span, as well as slower motor speed and information processing.

Older people are consistently found to be more affected, which may be due to cognitive function declining with age anyway.

And reduced cognitive functions may affect an obese person’s ability to lose weight.

Poor memory and functioning has also been linked to patients ‘slipping’ from their weight-loss programme after bariatric surgery.

‘A body-weight reduction of five percent or more has long been considered the threshold for clinically meaningful effect on the basis of improvement in metabolic health,’ researchers explained.

‘It is remarkable that in this trial, the majority (89 percent to 91 percent) of participants receiving 10-mg or 15-mg doses of tirzepatide achieved this benchmark.’

Weight loss was not the only positive impact the drug seemed to have on the lives of recipients, researchers found.

‘Weight reduction with tirzepatide was accompanied by greater improvements with respect to all measured cardiovascular and metabolic risk factors, including waist circumference, systolic and diastolic blood pressure, and fasting insulin, lipid, and aspartate aminotransferase levels, than placebo,’ they wrote.

‘Participants treated with tirzepatide had a percent reduction in fat mass approximately three times greater than the reduction in lean mass, resulting in an overall improvement in body composition.’

The findings indicate that weekly 15 mg injections of the diabetes drug will work best for weight loss.

While the difference between the 10 mg and 15 mg groups was small, researchers saw no evidence that the difference in doses led to an increased risk of negative side-effects.

The drug appears to be a silver bullet in America’s fight against obesity.

Previous research found that the drug can suppress a person’s apatite and limit their daily caloric intake – while also increasing the amount of energy they burn throughout the day.

As a result, they end up with a larger caloric deficit – and will shed weight over time.

The study published Thursday is the second massive study underwent by Eli Lilly in an effort to prove its drug can be beneficial in weight loss.

Results revealed in April found that the drug could help a person lose around 22.5 percent of their body weight on average.

A drug like this would be welcomed by many as well, with the Centers for Disease Control and Prevention reporting that over 40 percent of Americans are obese, and more than 70 percent are overweight.

Eli Lilly is expected to submit results from these trials to the Food and Drug Administration (FDA) to earn approval as a weight loss drug.

The list of FDA approved weight loss supplements is slim, and tirzepatide is set to be the most effective of the bunch.

Currently it is only approved for use managing type 2 diabetes, though doctors can prescribe it off-label for weight loss as they see fit.