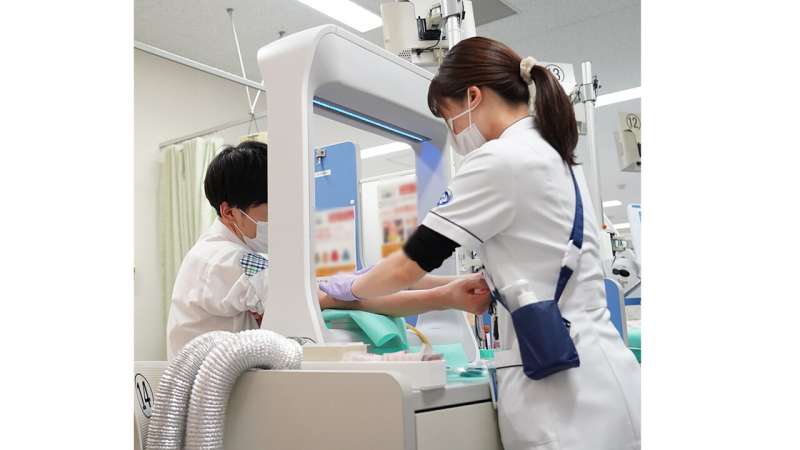 In efforts to prevent the spread of COVID-19, miniaturizing air curtains for hospital wards, labs, and other health care settings is gaining traction as a viable solution to inadequate face masks or when social distancing is not a realistic option.

“We envisage this system will be effective as an indirect barrier for use in blood-testing labs, hospital wards, and other situations where sufficient physical distance cannot be maintained, such as at a reception counter,” co-author Kotaro Takamure said.

An air curtain, or air door, is a fan-powered ventilation system that creates an air seal over an entryway. Hospitals use them to prevent ambulance fumes and other contaminants from reaching the inside of an emergency room.

One challenge in developing smaller air curtains is fully blocking emitted aerosol particles over time because it is difficult to maintain the air wall over a long distance. As a result, the devices gradually lose air-discharge intensity, creating a turbulent flow that allows infected aerosol particles to escape into the surrounding environment.

The DACS contains a discharge and suction port to help address this problem. A generator at the top of the DACS produces the airflow, which is guided to the suction port at the bottom of the device. This prevents airflow dispersion, thus leading to the collection of all the aerosol particles at the suction port. A high-efficiency particulate air (HEPA) filter can be installed inside the suction port for air purification.

The researchers are developing an accompanying virus inactivation system equipped with ultraviolet light that connects to the suction port. After the air is sanitized with the UV light, it is recirculated to maintain airflow of the air curtain and air pressure in the room.

The researchers tested their device by using an air compressor connected to a mannequin to simulate breathing. Dioctyl sebacate, a widely used solvent that spreads easily, was added to the airflow to create aerosol particles. Particle image velocimetry and high-speed cameras were used to determine the DACS’s blocking effect.

When the researchers placed the mannequin’s arm through the DACS to imitate a blood-collection scenario, they found the airflow above the arm was disrupted. However, the aerosol blocking performance remained unaffected.