Depressed teenagers do worse in exams because they have worse memory

Children with depression may do worse at school because their memory is altered, a study suggests.

The mental health condition appears to affect young people’s ability to remember and use information, which is crucial during exams.

Researchers have warned teachers and parents to avoid dismissing a child as lazy or not hardworking, when they in fact may be suffering with depression.

Statistics show that 10 per cent of young people aged five to 16 have a clinically diagnosable mental health problem. 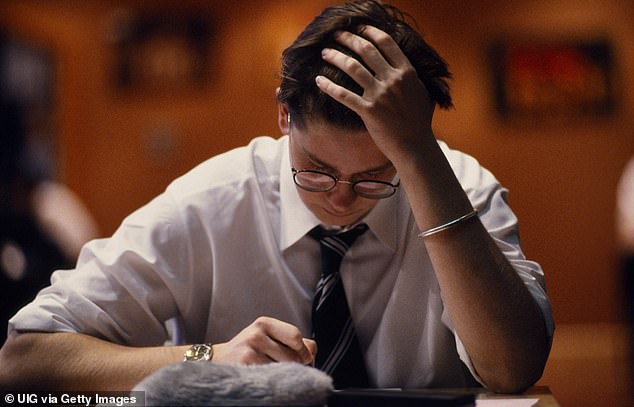 Children with depression may do worse at school because their memory is altered, a study at the University of Reading suggests

The researchers, led by Jeni Fisk, a pHd student at University of Reading, looked at how well the youngsters could hold and use information to accomplish a task.

This is a measure of working memory, which is similar to short term memory in that it has a limited capacity, and the information is being processed while used – when writing a phone number down, for example.

Children as young as two are developing mental health problems because of smartphones and tablets, scientists warned in November.

Just an hour a day staring at a screen can be enough to make children more likely to be anxious or depressed.

This could be making them less curious, less able to finish tasks, less emotionally stable and lowering their self-control.

Although teenagers are most at risk from the damaging devices, children under the age of 10 and toddlers’ still-developing brains are also being affected.

Researchers at San Diego State University and the University of Georgia analysed data provided by the parents of more than 40,000 US children aged two to 17 for a nationwide health survey in 2016.

Adolescents spending more than seven hours a day on screens are twice as likely to have been diagnosed with anxiety or depression as those who spent an hour.

The US National Institute of Health estimates children and adolescents commonly spend an average of five to seven hours on screens during leisure time.

Poor working memory skills in childhood can have an impact on children’s learning as it is required in the classroom for concentration, as well as in every day life.

According to the study, published in Memory, the teenagers with higher depression symptoms were able to retrieve fewer specific memories and displayed less verbal fluency.

Ms Fisk, whose research investigates the relationship between mood, memory and executive function skills in young people, told The Times: ‘Poor working memory is likely to have a negative impact on school work.

‘Working memory has also been linked to English and maths skills in young people.

‘It is very important that teachers and parents are aware of this difficulty because when a young person makes mistakes it is easy to think that they are just being lazy or can’t be bothered.

‘If we know that they have specific problems with memory that interfere with learning, then we might be able to find ways to help. It also means that we are less likely to blame them and get angry with them for any mistakes.’

Tamsin Ford, of the Royal College of Psychiatrists, said the study’s size was not large enough to find robust evidence that would influence policy changes.

However, she told The Times: ‘It is another reason why we don’t want to be leaving young people who are depressed without treatment, because those years are so vital.

Figures show that young people have difficulties accessing treatment on the NHS.

Of more than 338,000 children referred to child and adolescent mental health services (CAMHS) last year, only 31 per cent received treatment within the year.

The latest figures from NHS in 2017 show that one in nine children aged 5-15 have a mental health disorder, either emotional, behavioural, hyperactive, or other.

This is an increase since the last conducted survey in 2004, showing one in ten children were affected.

The figures rise to one in eight (12.8 per cent) in people aged 5-19, largely driven by an increase in emotional disorders, including anxiety and depression.

People with depression, as well as stress and anxiety, have shown to have difficulty in memory tasks in previous research, and in every day life may shown signs of forgetfulness or confusion.

While many studies have linked depression and loss of memory, the science to explain the relationship is not yet clear.

International researchers suggested that depression tends to shrink the hippocampus area of the brain, which is associated with creating new memories, storing memories and connecting them to our emotions.

Their global study of 8,927 people, published in 2015, found that people who suffer with repeated bouts of depression may be less able to form new memories.

Those who suffer chronic depression have a significantly smaller hippocampus than healthy individuals.

The reason behind why is unclear, but the authors wrote in the journal Behavioural Brain Research: ‘It is well established that depression is associated with reduced declarative memory performance and decreased hippocampal [region in the brain] volume.’