Boy, 11, has moles covering his WHOLE body because of a one-in-50,000 condition that caused him to develop a brain tumour

An 11-year-old boy who is covered in hairy moles because of a rare condition nearly died after it also caused him to develop a brain tumour.

Lucas Starr, from Alaska, suffers from giant congenital melanocytic nevus (GCMN), which causes dark-coloured, often hairy, patches of skin to develop in just one in every 50,000 children.

The condition led to Lucas developing hydrocephalus – a build-up of fluid in the brain – as well as neurocutaneous melanocytosis, which resulted in his tumour.

The youngster was rushed to hospital earlier this year after he had a seizure at home. Doctors later discovered his brain tumour, which they removed in Lucas’ 30th operation.

Despite enduring bullying at school and cruel stares from strangers, Lucas refuses to let his condition hold him back and dreams of one day becoming a professional racing driver. 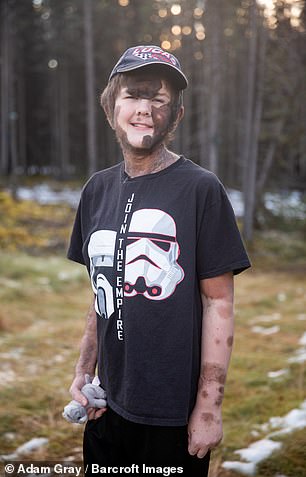 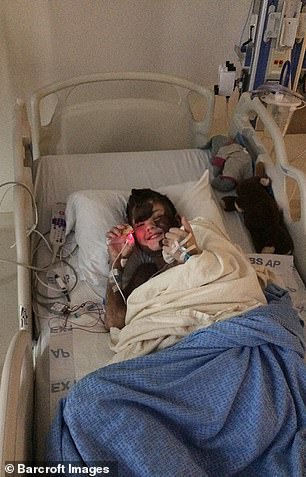 Lucas Starr (left) suffers from a disorder that causes him to be covered in dark moles. The condition – giant congenital melanocytic nevus – also led to a brain tumour, which was discovered when he had a seizure this year. He is pictured right after surgery to remove it 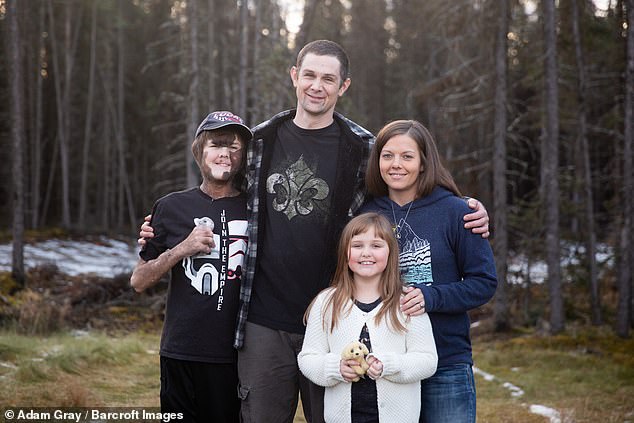 Despite the difficulties his family has endured, Lucas’ parents Devon and Whitney Starr (pictured at their home in Alaska with their daughter Kaylee) call their son a ‘reason to live’

‘The Nevus is all over me,’ Lucas said. ‘It means I can get brain masses easier and that can lead to more serious problems.’

After having a seizure and being rushed to hospital, doctors removed his brain tumour, which was small and not yet cancerous.

Lucas’ father Devon Starr, 35, said: ‘They pulled a very small square bone from his skull. As soon as they removed it, they could see it. They didn’t have to go in too deep thankfully.

‘But it was all so tough. What happens in the ICU, stays in the ICU. I’m just so pleased he had his father there to pull him through.’

Lucas is no stranger to hospitals, with his hydrocephalus meaning he requires check-ups every three-to-six months.

Mr Starr and his wife Whitney, 33, first realised something was wrong when Lucas was born looking like ‘burnt charcoal’.

They have since learned he probably developed GCMN in the first eight-to-14 weeks in the womb.

‘When he was born, doctors didn’t know what he had,’ Mrs Starr said. ‘Basically, he looked like charcoal burnt.’

The couple later discovered the condition was causing lesions that were covering some of Lucas’ brain and spine, with him requiring his first surgery at just three months old.

Although it has been difficult, Lucas’ parents say they are ‘so proud’ of him and even see him as a ‘reason to live’.

‘We just enjoy every second with him,’ Mr Starr said. ‘Maybe because of what’s going on with him or maybe not.

‘I just see it as more of a reason to live life and just breathe that into him as much as we can.’

Mrs Starr added: ‘We are so proud of Lucas. We are so amazed with him every single day.’ 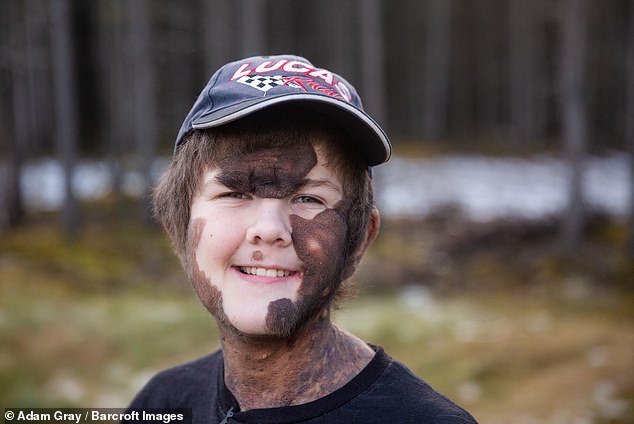 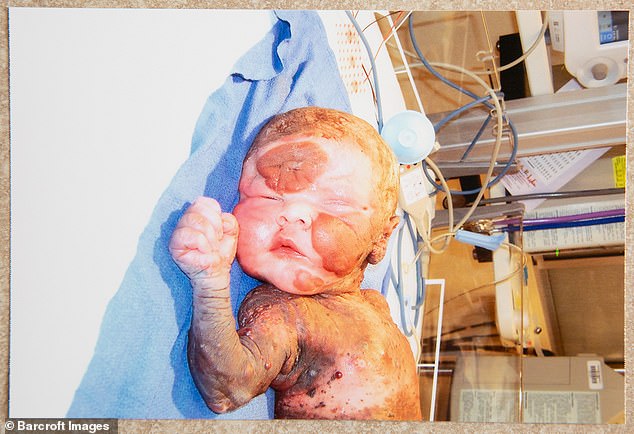 Pictured as a newborn, Lucas’ parents were unaware anything was wrong until he was born looking like ‘charcoal burnt’. They later learned his condition developed early on in the womb 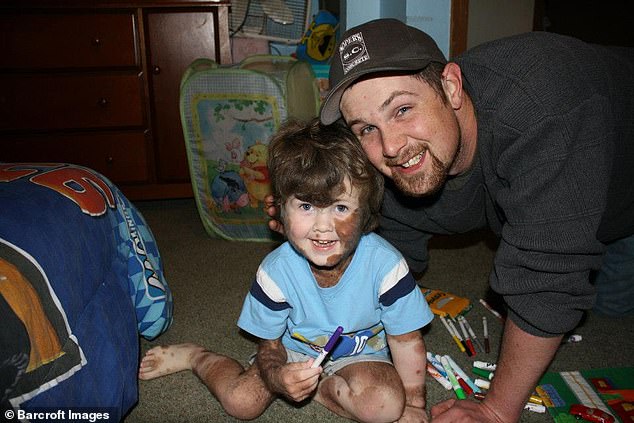 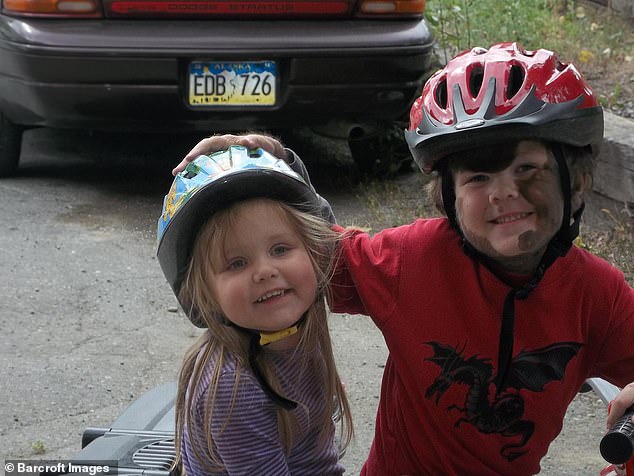 Despite his positive outlook, Lucas struggles with bullying and being stared at.

‘Whilst I’m out in public, I don’t like when people stare at me,’ he said. ‘I don’t know what they are thinking about me and the way I look and stuff.

‘Some of the time, I don’t enjoy going to school because kids bully me. I don’t know why, because I’m the same as everyone else. I just look different.

‘But I don’t let it stop me from doing anything. I can do everything that a normal kid can do. I just have some roadblocks here and there.’

His mother also finds the bullying difficult but describes Lucas as a ‘fighter’.

‘Since he was born, people always stare at him,’ she said. ‘They don’t understand. They think they can catch it or something.

‘It’s hurtful and traumatising for children when they get made fun of.’

But, she added: ‘Lucas is a strong-willed kid. He came out as a fighter and I think he will go out that way too.’ 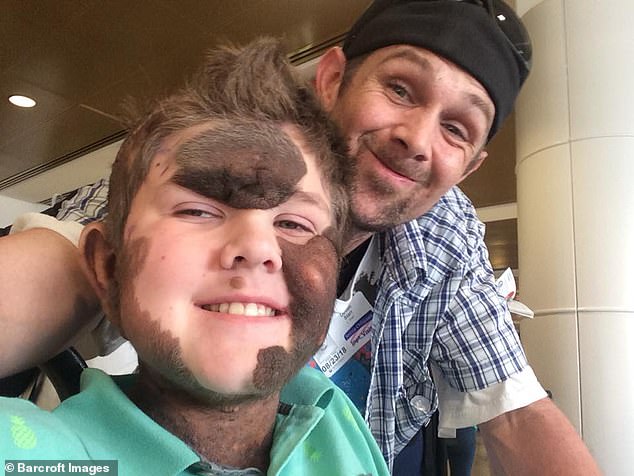 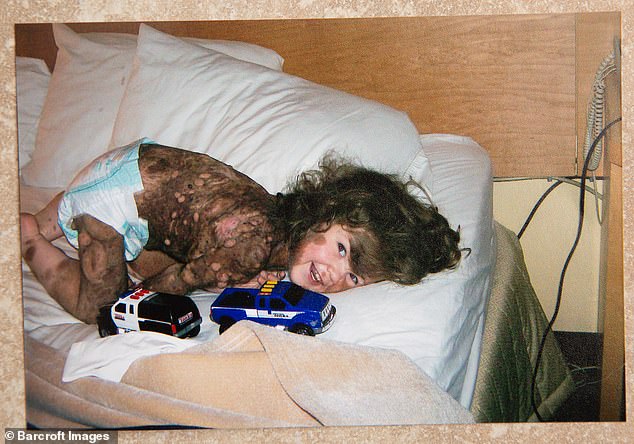 Pictured when he was younger, Lucas describes himself as a ‘normal kid’ with ‘roadblocks’ 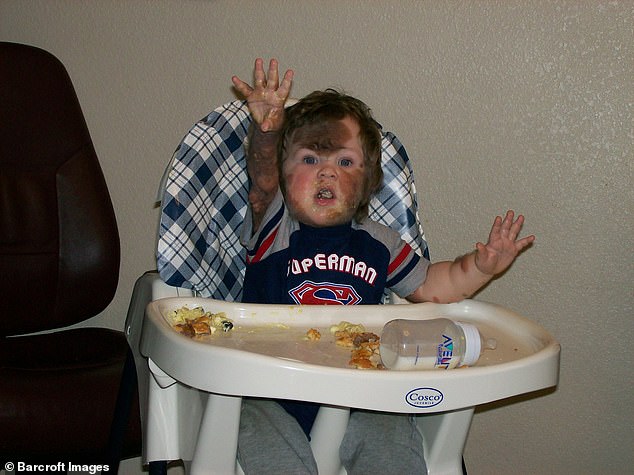 Lucas had his first surgery at just three months old and endured his thirtieth earlier this year to remove his brain tumour. The youngster is pictured as a toddler at home

WHAT IS GIANT CONGENITAL MELANOCYTIC NEVUS? AND HOW DOES IT CAUSE BRAIN TUMOURS?

Giant congenital melanocytic nevus (GCMN) is defined as dark-coloured, often hairy, patches of skin that are present at birth. It affects around one in every 50,000 children to some extent.

The patches can range from a few millimetres across to those that cover large patches of the body.

In severe cases, the lesions can extend beneath the skin and into internal tissue, even reaching the brain and spinal cord.

Although usually benign, these deep lesions can lead to hydrocephalus – a build-up of fluid in the brain – and seizures. Tumours and abnormalities to the central nervous system can also occur.

This severe form of GCMN is thought to affect between five and 15 per cent of patients with the larger form of the disease. One-to-two per cent of these sufferers also develop melanoma – the deadliest type of skin cancer.

GCMN is thought to occur due to abnormalities in the gene responsible for producing pigment.

It is usually spotted at birth, with moles being most obvious on a baby’s abdomen and back. These may later ulcerate due to the skin not being properly developed.

Treatment is only surgical, with skin replacements from elsewhere in the body or an artificial substitute being the gold standard. MRI scans can help to keep any tumours or internal lesions under control.