Home » Health News » 3 things that will make it easier for you to discuss taboo topics in your relationships, from sex to death to money

3 things that will make it easier for you to discuss taboo topics in your relationships, from sex to death to money 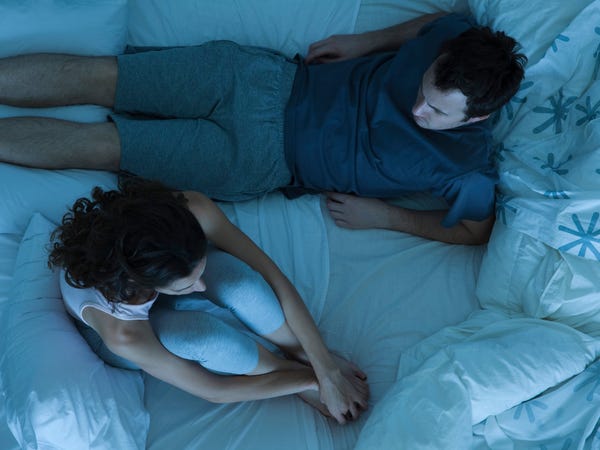 As a child or a teenager, you may have learned from adults in your life that it's inappropriate to discuss topics like sex, money, or death.

These taboos, or subject matters deemed unacceptable by a higher power, can follow you into adulthood and make it hard to broach certain difficult but important-to-discuss topics with a partner or loved one.

But there are things you can do to break through that mental barrier and have less fraught conversations, according to renowned relationship therapist Esther Perel.

The key is understanding where a taboo topic came from, Perel said in a September 16 YouTube livestream called "Are Taboos Holding Your Relationship Back?". Then, you can interrogate why you feel shame around that topic.

To break that taboo, push yourself to have uncomfortable conversations with people about them, to help you feel less controlled by them, Perel said.

Ask yourself: 'Where did this taboo come from?'

According to Perel, understanding to root of the taboo is the first step to broaching the topic in conversations with others.

She said taboos are often used to "create boundaries and group cohesion," especially societal taboos around incest and bestiality, because they help maintain a social order. But other taboos, like those around sexuality, money, and death, are often rooted in fear.

If, for example, your parents believe sex is only appropriate between two married people, that extramarital sex taboo could be rooted in a religious belief. And if your extended family refuses to discuss same-sex couples, there could be a longstanding taboo around homosexuality.

If you find yourself upset or disappointed that your family won't broach these topics, understanding why that is can help you break free from staying silent too, Perel said.

Then think: 'What would it mean if I broke this taboo?'

Saying you'll break a family-instated taboo is much easier said than done, but Perel said reflecting on why you want to put an off-limits topic on the table can help.

Breaking tradition isn't a bad thing, Perel said, but it can create a sense of dread because you're taught doing so is shameful or disappointing to another person.

She suggested asking yourself, "What would it say about me if I don't follow the rule, or break the taboo?"

This approach helps you see the bigger picture in your choice, rather than fixate on the initial reaction a family member might have to your decision.

Your parents might call you rude and disrespectful for asking when your father will write his will, because doing so acknowledges his mortality, Perel explained. But that doesn't mean you're a rude or disrespectful person.

Rather, it might mean you care about your family enough to discuss difficult topics that preserve their financial and emotional safety.

When you understand why breaking a taboo is important to you, you can feel less trapped by others' expectations and create your own boundaries, Perel said.

Have uncomfortable conversations, and surround yourself with people who speak freely about hard topics

Once you have a better understanding about why you want to break a relationship taboo, you can begin to do just that.

Perel said it's important to be patient with yourself throughout this process.

She said it's important to talk to your "inner child," and acknowledge their fears about breaking the taboo. Then, it's time to bring up the taboo with the people in your life who have avoided it.

"Don't try not to be uncomfortable. Just do it," and eventually it will be more comfortable, Perel said.

It's possible your parents or family member will react negatively. In those cases, Perel said to take an understanding approach.

Say you understand why they don't like your decision to break the taboo, but for you, it was the right choice.

According to Perel, this approach is better than shutting them down with a, "Trust me, I'm fine," because they'll likely take that to mean you aren't really OK.

You can also elaborate on why you found breaking the taboo to be the right choice for you, Perel said.

She said taboos act as moral compasses for every person, so getting to know which boundaries to push and which to keep in place will help you better understand yourself and the life you want to build.

Lastly, Perel suggested surrounding yourself with people who have broken the taboos you wish to break in your own life. Talking with these folks can inspire you to live authentically and offer more insight into why you'd like to break the taboo in the first place.