During his virtual appearance on The Late Late Show Thursday, Harris recalled to host James Corden a fishing trip he and his 9½-year-old son recently took after tie-dying some shirts together, where they caught seven fish — and came face to face with some unexpected species.

"He had a bucket list of things he wanted to do before school starts," the 47-year-old actor said, as Corden, 42, showed off a photo of Harris and Gideon on a boat, proudly holding up one of their catches. "Gideon was unbelievable; he was better than I was, for sure. He was a bit of a fish whisperer."

The How I Met Your Mother alum's son was so skilled, in fact, that he managed to catch "two baby sharks" during their time out on the water. (And of course, Corden couldn't help humming the "Baby Shark" tune in response.) "They were large and toothless so I think they're called dogfish or something like that, so we certainly put them back in [the water] and took care of them and everything," Harris continued, "but that was incredibly exciting."

Luckily for the actor, Gideon and the little boy's twin sister Harper Grace, Harris' husband David Burtka was able to take the next step of the process into his own hands.

"The nice thing about fishing with my family is that my husband's a chef and can actually deal with fish," Harris said. "So we got to catch the fish and the little ones we put back but the big ones we got to keep, and then we came home and he made crudo and we had a whole proper cooked fish and salad and everything."

"It was really farm-to-table," he added, joking, "What is it, snout-to-buttocks? Something like that?"

I want to wish my incredible husband @nph a spectacular Birthday! Every celebration we spend together gets better and better. I am grateful for this quarantine because we've actually gotten to spend more quality time and it's brought us closer together. Thank you @NPH for being a fantastic father, a perfect spouse and an overall magnificent man.

Harris also touched on his family's bout with COVID-19, after revealing earlier this week on the Today show that he, Burtka, 45, and their twins all contracted the virus earlier this year.

"It was right when all of this was first happening — end of March, early April. It wasn't fun," he said. "It was like a flu of multiple weeks and then lethargy for another … at least that long, of not wanting to exercise, not wanting to do much."

"It worked its way through me, and my husband, as well. Our friend Michael got it, our kids got it," continued the former Doogie Howser, M.D. star. "It's no joke, that's for sure, but happily, we're on the other side of it. We didn't have to go to the hospital."

While Harris doesn't feel like his family's particular "ills are newsworthy," he does have a message for viewers: "Keep wearing masks, everybody. It's pretty important." 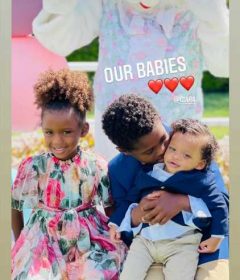 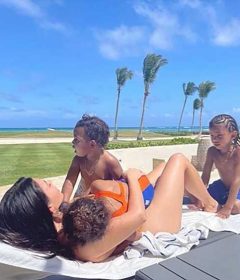